The wildfires raging on the West Coast are an all but inescapable crisis around the country, with at least 27 people dead in three states, and smoke haze reaching as far as New York City.

“The rules of fighting wildfires are changing because our climate is changing,” Gov. Jay Inslee of Washington wrote in a letter to President Trump.

Came back here for the first time, and it’s the worst thing I’ve ever seen in my life. I had seen videos, but it’s 1,000 times worse than I could have ever imagined.

The wildfires raging on the West Coast became an all but inescapable crisis around the country on Tuesday, with at least 27 people dead in three states, fires and evacuations starting in Idaho, milky smoke clouding the skies over Michigan and haze reaching as far as New York City.

In the states where the fires are burning worst — with more than five million acres charred so far in Oregon, California and Washington State — the authorities were trying to adapt to a disaster with no clear end in sight, under conditions deeply exacerbated climate change.

The Bay Area, under a choking blanket of smoke for four weeks, set another record for consecutive warnings about hazardous air. The Oregon State Police established a mobile morgue as teams searched incinerated buildings for survivors and the dead. Alaska Airlines suspended flights out of Portland, Ore., and Spokane, Wash., citing “thick smoke and haze.” And Gov. Kate Brown of Oregon requested a presidential disaster declaration, saying late Monday, “to fight fires of this scale, we need all the help we can get.”

Where major fires are burning in the Western states and how unhealthy air quality has become.

Gov. Gavin Newsom of California met with President Trump on Monday in McClellan Park, near Sacramento, thanking him for federal help and agreeing that forest management could be better — while also noting that only 3 percent of land in California is under state control, compared to 57 percent under federal control. The governors of all three states stressed that climate change had made fires more dangerous, drying forests with rising heat and priming them to burn, science that on Monday the president denied.

“The rules of fighting wildfires are changing because our climate is changing,” Gov. Jay Inslee of Washington wrote in an open letter on Monday. “There is no fire suppression plan on this planet that does anyone any good if it doesn’t even acknowledge the role of climate change.”

Addressing Mr. Trump directly, he wrote, “I hope you had an enlightening trip to the West Coast, where your refusal to address climate change — and your active steps to allow even more carbon pollution — will accelerate devastating wildfires like you are seeing today.”

In Oregon, tens of thousands of people were still under evacuation orders and the Beachie Creek fire, east of Salem, grew to burn almost 200,000 acres.

“Your administration just entered into a first-of-its-type commitment over the next 20 years to double our vegetation management and forest management.” “Right.” “I want to thank you for supporting that effort, funding that effort. We acknowledge our role and responsibility to do more in that space. But one thing is fundamental: 57 percent of the land in this state is federal forest land. Three percent is California. So we really do need that support. We need that emphasis of engagement. And we are fully committed to working with you to advance that cause. We’ve known each other too long, and as you suggest, the working relationship I value — we obviously feel very strongly that the hots are getting hotter. The dries are getting drier. When we’re having heat domes, the likes of which we’ve never seen in our history: The hottest August ever in the history of the state, the ferocity of these fires, the drought — five-plus years — losing 163 million trees to that drought. Something’s happened to the plumbing of the world. And we come from a perspective, humbly, where we submit the science is in and observed evidence is self-evident that climate change is real, and that is exacerbating this. And so I think there is an area of, at least, commonality on vegetation, forest management. But please respect — and I know you do — the difference of opinion out here as it relates to this fundamental issue, on the issue of climate change.” “Absolutely.” “Appreciate it, thanks.”

With wildfires raging across the West, climate change took center stage in the race for the White House on Monday as former Vice President Joseph R. Biden Jr. called President Trump a “climate arsonist” while the president said that “I don’t think science knows” what is actually happening.

A day of dueling appearances laid out the stark differences between the two candidates, an incumbent president who has long scorned climate change as a hoax and rolled back environmental regulations and a challenger who has called for an aggressive campaign to curb the greenhouse gases blamed for increasingly extreme weather.

Mr. Trump flew to California after weeks of public silence about the flames that have forced hundreds of thousands of people from their homes, wiped out communities and forests, burned millions of acres, shrouded the region in smoke and left at least 27 people dead. But even when confronted by California’s governor and other state officials, the president insisted on attributing the crisis solely to poor forest management, not climate change.

Mr. Biden, for his part, assailed Mr. Trump’s record on the climate, asserting that the president’s inaction and denial had fed destruction, citing not just the current emergency on the West Coast but flooding in the Midwest and hurricanes along the Gulf Coast. In an outdoor speech at a museum in Wilmington, Del., the Democratic presidential nominee sought to paint a second Trump term as a danger to the nation’s suburbs, flipping an attack on him by the president.

The North Complex Fire tore through the tiny California mountain community of Lake Madrone last week, reducing the pine-fringed shore, which was speckled with cottages and frequented by bears and otters, to bare black timbers and ash.

The community had spent years clearing fire breaks and removing forest debris to protect it from wildfire. But roaring winds, high temperatures and a fire storm that raced almost 20 miles in a few days smashed its defenses late last week and destroyed about half of the 130 houses.

“We hoped we had done enough,” said Scott Owen, a resident who lived by the lake. “After watching that fire I don’t think you can do enough. This fire moved like no one had seen before.”

On Monday evening, Sheriff Kory Honea of Butte County announced one additional victim of the fire, which has killed at least 15 people. He said that family members of some of those who died told deputies that the individuals had packed their bags and planned to evacuate, but changed their minds based on false information that the fire was 50 percent contained.

Mr. Owen’s whole neighborhood burned to the ground in the blaze. One neighbor barely escaped, he said, and sheltered from the flames in a creek. On Monday the neighbors were still trying to account for everyone, hoping that authorities would not have to search the debris with cadaver dogs.

Though the flames have moved north, the residents of Lake Madrone have not been able to return yet. Mr. Owen, who has owned a house on the lake for decades, said he was not sure he would rebuild.

“I just think things have changed and we’re going to have more fires,” he said. “This is a record year — who knows where it goes from here.” 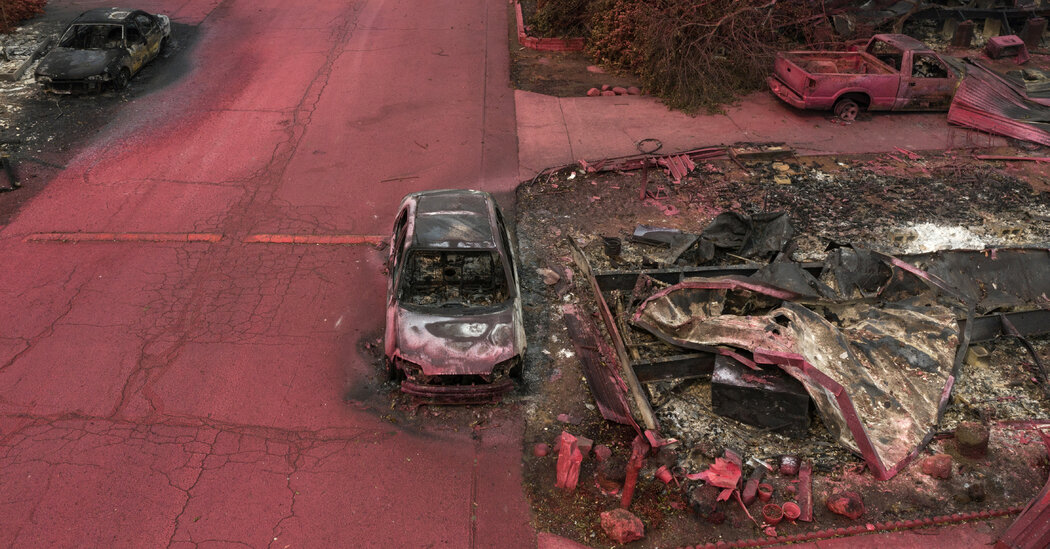