Every child in N.Y.C. public schools was given a $420 benefits card. The well-off should use theirs to support food banks.

A few weeks ago, I received a text from an 855 area code telling me that I might be eligible for food stamps and to call the number provided to find out. Given that I am sufficiently compensated for what I do, I deleted the message assuming it was a scam (which it turned out to be).

Soon enough, though, friends living in well-appointed Brooklyn brownstones began reporting, with appropriate astonishment, that they had received debit cards, in the mail, issued by the state for $420 each, which were meant for purchasing food.

Presumably, this was a different sort of con, one cooked up by devious libertarians to reveal the loony inefficiency of entitlement programs: Welcome back from your quarantine on Martha’s Vineyard! Here’s your government-sponsored grass-fed rib-eye! At least you couldn’t use the subsidy at Starbucks.

The cards, known as P-EBT (for Pandemic Electronic Benefit Transfer), are entirely legitimate. As it happened, every child enrolled in public school in New York City would receive one regardless of family income. The program, which delivers $880 million to New York State, was paid for by the federal government, a result of the economic relief package passed by Congress in the earliest phases of the coronavirus outbreak. The sum of $420 was meant to equal the cost of meals that a child would have received in the spring had school been open.

While the notion of people who have spent the past several months ordering stone fruit and oat milk from Whole Foods getting those things for free seems absurd, the exercise is not as wasteful as it appears. Advocates for food security are not outraged and in fact see the positives as vastly outweighing the negatives.

While many other municipalities and districts around the country had to apply for the benefit, New York City received it automatically because so many students in the school system — nearly three-quarters — qualify for free or reduced-price lunch according to federal poverty guidelines. (And since 2017, and the expansion of free lunch in city schools, all students can receive it anyway.)

Even if the state had wanted to deliver the P-EBT cards only to needy families — excluding, for example, those with six-figure incomes and diverting those benefits to the poor to supplement them — it did not have the discretion to do so. The benefit was designed to be universal — always a much easier political sell.

If you are a parent on the Upper West Side or in Cobble Hill, you may be wondering if you can rightfully fill your Subzero fridge with groceries bought with food stamps.. In fact, you should. Because you are prohibited from passing the card on to someone else, if you don’t use it, the money vanishes; you are simply reducing the federal budget deficit by $420.

One obvious solution is for wealthier families to use the cards and then donate $420 to a food charity.

The extent to which this has happened so far is unclear. When I called Melony Samuels, the executive director of the Bed-Stuy Campaign Against Hunger, a major food pantry in Brooklyn, she said she had not yet noticed a surge in contributions of this kind, and her chief concern was that some of the families who rely on donations have not yet received their benefits in the mail. She was working to make sure that they did.

Despite the obvious travesty of well-off families receiving a food subsidy before those in desperate need get theirs, the pandemic EBT benefit is the most progressive measure to come out of recovery efforts. Crucially, in New York, the wide net it casts means that thousands of undocumented immigrants, ineligible for benefits from the Supplemental Nutrition Assistance Program (SNAP) can more easily feed their children.

Beyond that, the cards present a singular opportunity for wealth transfer in an educational system distinguished by gaping inequities that the pandemic has put in even greater relief. This week, New York City announced that it was delaying the opening of school for a second time, even as private schools forge ahead and public schools in wealthy neighborhoods raise money through PTAs to assist with the costs of tents and other measures that would make live school as safe as possible.

Because of this, some Brooklyn parents have been organizing to get members of their communities to donate the money from P-EBT cards to funds that would direct resources to poorer schools to help pay for new technology, ventilation systems and so on — that the reimagining of the current school year requires.

One mother calculated that if every family in her son’s school who could afford it donated the value of their cards, that school alone would raise $170,000 toward the effort of outfitting children and school buildings with what they needed to make the upcoming academic term quasi-functional.

Even if such an effort were stymied by bureaucracy, the P-EBT program reveals something important about the ways in which the financially struggling can best be helped.

“Lots of people labor under this idea that charity is good and government is bad,” Joel Berg, the chief executive of Hunger Free America, explained. “This is a ridiculous construct. The media likes to fixate on what this or that celebrity chef might be doing to fight hunger.

“The important message here is that government has a far greater capacity to help than charity. In normal times, charities are dwarfed by the capabilities of government programs — and now they are absolutely dwarfed by them.”

All of this is to say that no gala featuring Jean Georges could raise $880 million to feed people in a single state.

“Am I thrilled that wealthy kids are getting this?” Mr. Berg continued. “No. But this isn’t going to kids at Spence,” he said.

What does bother him is the temporary nature of the relief. What happens after the money has been spent? 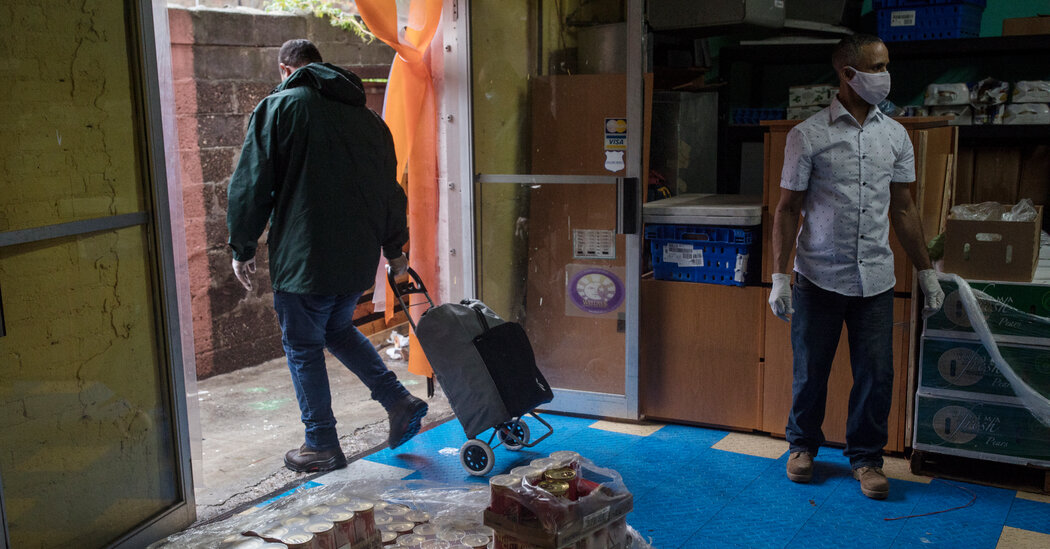