Throughout the spring, I knew that I was deteriorating physically. The room would randomly spin around me, fatigue would set in and migraines would hit, distorting my vision and making it nearly impossible to look at a screen.

I was worried about my physical health, but I also knew that such symptoms were commonly associated with stress. I had been trying to help my preschooler and kindergartner learn remotely, while caring for a nursing baby and working full time — all while dealing with a pandemic.

Separating a mental health concern from a physical health concern on your own can be difficult, said Dr. Leana Wen, an emergency physician and public health professor at George Washington University, and former health commissioner of Baltimore. The stress of caregiving can lead to seemingly vague symptoms like headaches, depression and even an increase in drinking, she added. “That’s why seeking help from your doctor, not waiting until it reaches a boiling point, and seeking help early is important.”

The first time I booked a telemedicine appointment to discuss my long list of symptoms, my doctor suggested I get a coronavirus test. (I was appreciative. It was negative.) Beyond that, she said, it sounded like I was dealing with stress with a side of sinus pressure and that I should start taking Claritin.

One month later, I found I could no longer climb the stairs without needing to sit for a few minutes. A migraine hit with such force that I didn’t get out of bed for more than 24 hours. After a second telemedicine appointment, and another coronavirus test, I reluctantly asked to be seen in person. Blood tests revealed that I was severely anemic and had to be hospitalized for a blood transfusion.

According to a Kaiser Family Foundation health tracking poll of about 1,200 U.S. adults, nearly half reported that they or someone in their household had postponed or skipped medical care because of the pandemic.

Amanda Zelechoski, an associate professor of psychology at Valparaiso University and co-founder of Pandemic Parenting, an online research and resource hub for parents, said that this hesitation to seek in-person help for minor symptoms was in part because of the original messaging from public health experts: Stay home; let front line workers focus on emergency cases.

But today, as the pandemic continues without an end in sight, Dr. Zelechoski said, this mentality needs to shift.

“We have to think about getting back to what that routine care looks like — or when there are concerning things, recognizing that ‘I still need to get it checked out,’” Dr. Zelechoski said. Avoiding care “could be much worse than the short-term worry about going back for an appointment.”

For Ericka Andersen, a writer in Indianapolis, who has two children, ages 2 and 4, the pandemic has meant a long-delayed annual physical: A non-Covid-related reschedule in early 2020 was extended even further once the pandemic closed down offices for nonessential appointments. Andersen had to wait nearly 10 months.

“It really concerned me,” she said. “I just want to make sure, as someone who has a history of cancer in my family, that nothing is wrong.”

Dr. Wen, who has had cervical cancer and is also at high risk for breast cancer because of her mother’s diagnosis at age 44, said that this lack of knowledge can then restart the cycle of stress. “For me, missing my preventive screenings would have a potential physical consequence, but also it would cause an extraordinary amount of stress,” she said. “I would always be thinking about: Should I have gotten screened earlier because I may have cancer?”

Denise Ojeda, an education equity advocate who has an 11-year-old son with special needs and who lives in San Antonio, said she also put off a health care visit, in her instance for a bad case of hives, hoping she could tough it out. After two weeks of trying over-the-counter remedies to no avail, she ultimately sought in-person care and got relief almost instantly.

“I think so often we focus, as parents, on our children and their needs first,” said Dr. Wen, who has two children ages 3 years and 6 months. “But we need to be healthy in order to care for others around us too. And that includes both physical as well as emotional well-being.”

According to Dr. Zelechoski, who has three kids — 10, 8 and 4 — choices like these can add to a parent’s already full plate and exacerbate “decision fatigue.” Parents must determine everything from the right schooling for their children to who’s in their “bubble” to whether it’s safe to simply go to the grocery store — all of which can be exhausting on their own, but especially during a major public health crisis.

“It’s just not sustainable and it really will start to take a toll,” said Dr. Zelechoski, adding that a good way to pre-empt that is for parents to give themselves grace.

After a stressful week of grappling with whether to move her son to a new school, Ojeda decided to give herself a break by temporarily tapping out of the role of Mom. When her son asked to order pizza, for instance, she played pretend, acting like more of an older sister who couldn’t make such decisions and suggested figuring something out from the pantry instead. The duo had a fun, low-stress weekend; and once her “brain” and “spirit” had a break “from being Mom for a weekend,” said Ojeda, she was then able to refocus on the decision of whether to transfer her child to another school.

As parents continue to move through stressful situations, experts encourage them to recognize that what they are experiencing is common. “You’re in the middle of a collective global trauma right now,” said Dr. Zelechoski. She, along with other experts, recommended that parents regularly check in with themselves and with their health care providers, whether in person or via telemedicine.

In late August, my two older kids started all-virtual kindergarten and first grade, and my 1-year-old learned how to climb nearly everything in the house without fear. As I adjusted to this new and mundane normal (along with a news cycle from hell), I again found it difficult to differentiate the symptoms of everyday, baseline anxiety from something more serious. But now, “checking in” with myself has taken the form of regular blood tests, as well as leaning more heavily on my husband for help with our kids’ virtual schooling and logging offline every once in awhile.

My attempts to “put the oxygen mask on first” are often laughable; it’s all imperfect and chaotic. But we all do what we can as we feel for the edges of our new reality.

Sandi Villarreal is editor in chief of Sojourners, a print and online magazine about faith, culture and politics. She lives with her husband and three children in Washington, D.C.

News – When What Parents Are Feeling Is More Than Just Stress 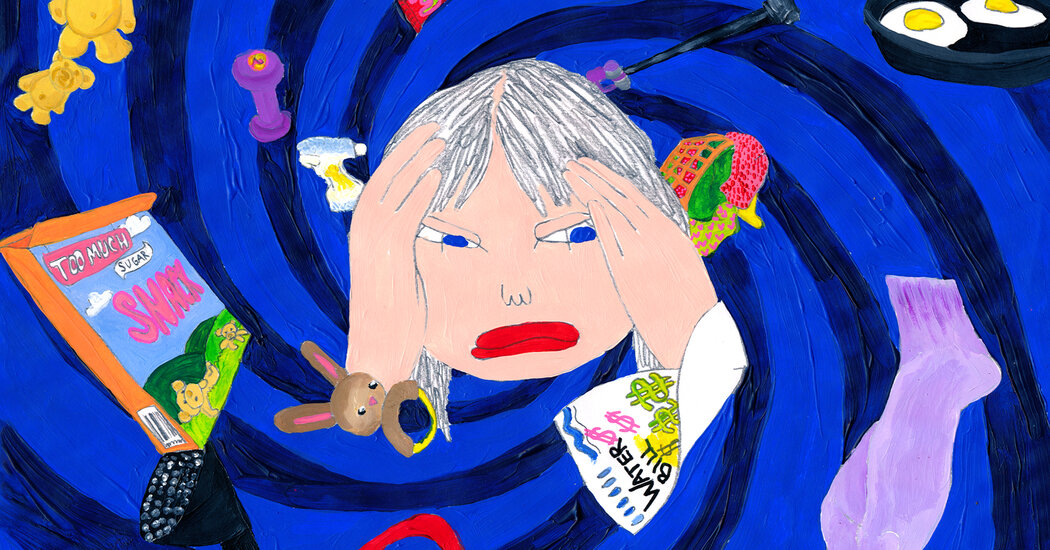