A national advertising campaign urging shoppers to start their Christmas preparations early kicks off today in a desperate attempt to ease pressure on retailers.

The cheeky take on the Government’s ‘Stay Alert, Control the Virus, Save Lives’ campaign has a serious message designed to prevent the usual retail rush through late November and December.

Retail bosses are worried about massive queues outside stores during peak demand, as well as bottlenecks at warehouses and courier networks unable to cope with a further jump in online orders from shoppers avoiding cities and town centres.

Helen Dickinson, chief executive of the British Retail Consortium, whose members account for £180 billion of sales online and in stores, said there are ‘signs some customers have already started a little earlier than usual’.

She said: ‘While celebrations will no doubt be a little different this year, we know customers want to keep Christmas special.

‘That’s why we’re encouraging people to shop early and prevent the last-minute rush so their fellow customers and all the store colleagues, warehouse workers and delivery drivers have the space they need to stay safe and well.’

High street retail executives told The Mail on Sunday that a positive start to September trading has since trailed off.

Sources said there are mounting concerns some chains will not make it to January with trade so subdued and unpredictable.

Richard Lim, chief executive at Retail Economics, said: ‘This is about capacity and whether the industry will cope with this seismic shift – not just with restrictions in shops but a further shift online with warehouses also putting strict social distancing measures in place.’

Defiant drinkers have packed into London’s bars and restaurants on day one of the capital’s new Tier 2 lockdown after normally-bustling streets stood deserted earlier in the day.

Restaurants in Covent Garden which would normally be busy with visitors lay empty this afternoon due new restrictions brought in to stop the rise in coronavirus cases – as it was revealed revenue had fallen by 85 per cent.

But a nightime resurgence has seen revellers stream into Borough Market and Soho for a night of drinking – even if the new restrictions mean they have to sit outside if joined by members of other households.

London has been placed under Tier 2 level restrictions following a rapid rise of infections in many boroughs in the city, meaning meeting people who live in other households indoors is banned.

Some 16,171 coronavirus cases were recorded in the UK on Saturday, with another 150 deaths announced.

Venues can continue to operate but pubs and restaurants must ensure customers only consume food and drink while seated, and they must close at 10pm.

Industry bosses have warned 200,000 London hospitality workers will lose their jobs this weekend alone as businesses close their doors.

Ms Nicholls said that revenue across bars and restaurants in central London plunged by 85 per cent as less people took to venues under new restrictions.

She said: ‘The first day of Tier 2 restrictions saw the hospitality sector’s worst fears confirmed with a 50% increase in cancellations and a fall in forward bookings.

It was barely possible to maintain social distancing in Chinatown, London, earlier today as the first day of Tier Two restrictions failed to keep people at home

‘That is clearly unsustainable and businesses in London are now planning to close their doors and shutter their sites, with forecasts of up to 200,000 job losses unless enhanced JSS is extended.’

Ms Nicholls has pushed for the ‘job support scheme’, which requires employers to cough up 55 per cent of staff wages, to waive employer contributions and called for a tier-3 style funding for all hospitality in which venues hit by closures can get £3,000 cast grants.

Under the new guidelines individuals from different households in London, Essex, York and parts of Derbyshire, will be banned from mixing indoors, even in hospitality venues.

Outdoor socially distanced mingling is permitted for groups of up to six, meaning people from different households will be required to meet in beer gardens or at restaurants with outdoor seating.

Ms Nicholls said: ‘Being moved into tier 2 is a curse for businesses. They will be trapped in a no man’s land of being open, but with severe restrictions that will significantly hit custom, all while unable to access the job support available in tier 3. It is the worst of both worlds for businesses.

‘Venues in London have already taken a hit due to the dip in inbound tourism and with people increasingly working from home.

‘A move into tier 2 will now be catastrophic for some of them and it is only going to be made worse by the end of the furlough scheme in under two weeks.’

Soho, famous for its thriving nightlife, was pedestrianised when the national lockdown started to lift at the start of summer so its eateries and bars could set tables up in the street.

London has been placed under Tier 2 level restrictions following a rapid rise of infections in many boroughs in the city, leaving venues deserted

Almost a third of restaurants and pubs in England will be affected by the tougher tier curbs introduced – more than 8,500 venues and 5,000 pubs

Some said they had seen a slight drop in customer numbers compared to last weekend, but said it could be down to the falling temperatures rather than the latest measures.

One member of staff, who asked not to be named, at the at the Greyhounds Pub on Greek Street said he now had to ask everyone sitting inside if they came from the same household.

‘I ask them but it’s just not practical, I have no way of checking unless I ask everyone to give me their address,’ he said.

A waiter at L’Antica Pizzeria Da Michele on Old Compton Street said they could no longer take bookings as a result of the changes, and relied on walk-ins.

Despite that, Marcelo Teixeira Moraes, 24, said the restaurant had been at its ‘busiest for months’ on Friday.

‘People were grabbing the chance to go out all together while they could, it was so busy I couldn’t keep up,’ he said.

Door staff at Comptons, a nearby pub, said they were also having to rely on people’s honesty when it came to making sure customers sitting inside were all from the same household.

One member of staff said they had been very lucky so far in terms of customer numbers, but were worried about what would happen when the weather turned colder.

Earlier in the day, anti-lockdown protesters marched down Oxford Street before congregating in nearby Leicester Square to demonstrate against the restrictions.

Led by Piers Corbyn, brother of former Labour leader Jeremy, protesters yelled at passers by to remove their masks, and telling them any Covid-19 vaccine would be ‘poison’.

Many of those on the march headed to Soho’s pubs at the end of the demo.

On Friday revellers made the most of their final night out over the weekend and descended onto London’s streets to enjoy bars and restaurants before the restrictions.

Wetherspoon founder Tim Martin today renewed his attack on the Government after the pub chain suffered a £105million loss following a 30 per cent drop in sales.

Mr Martin said it was unfair that pubs have been treated harsher than supermarkets as he revealed sales fell from £1.82billion to £1.26billion in the year to July 26, 2020.

Publishing the company’s delayed results, he added that the UK should adopt the Swedish model for pandemics to allow his pubs to open again properly, a system which he said ’emphasises social distancing, hygiene and trust in the people’.

The company also announced a further 108 job cuts at its head office, having already said it would cut up to 130 jobs at its HQ and up to 450 at airport concessions.

Mr Martin, quoting businessman Warren Buffett from 1989, said governments across the world have based their lockdown decisions on ‘deeply flawed analysis’.

He claimed Swedish Professor Johan Giesecke is the epidemiologist equivalent and the UK should follow his lead, which would allow Wetherspoon to reopen pubs.

Almost a third of restaurants and pubs in England will be affected by the tougher tier curbs introduced – more than 8,500 venues and 5,000 pubs.

Pubs which serve very little food are expected to have suffered the most through the pandemic so far, due to not having benefitted from the ‘Eat Out to Help Out’ scheme which saw a cut on food VAT.

Industry bosses previously estimated 300,000 hospitality jobs would be lost in the absence of an industry bailout by government.

But Ms Nicholls prediction of 200,000 jobs to be lost in central London this weekend alone means the total could be much higher.

This comes as Britain recorded its highest number of coronavirus deaths in four months after another 150 victims were announced today.

Boris Johnson divided the country into ‘medium’, ‘high’ or ‘very high’ alert sectors this week after after a 9.3 per cent increase in coronavirus cases on the previous week.

Liverpool was immediately put into Tier 3, the highest level, with Manchester, Newcastle and Birmingham among cities being ranked as Tier 2, or ‘high’ risk.

Tier 1 restrictions, which the majority of England have been placed under, are believed to mirror the rules currently in place across the country.

It includes the rule of six, a 10pm curfew, group sport to be played outdoors only and a maximum of 15 guests at wedding ceremonies.

Two households are allowed to socialise outdoors but must stay within the six-person limit and adhere to social distancing.

Under these regulations, residents are not banned from travelling to a Tier 1 area, but are advised to minimise the number of journeys they make.

Draconian Tier 3 regulations have seen restaurants close at 10pm, pubs and bars being ordered to close and households have been banned from mixing indoors or outdoors.

Locals are advised to only leave their areas for essential travel, including work and education, and overnight stays outside of ‘high’ risk areas are banned. 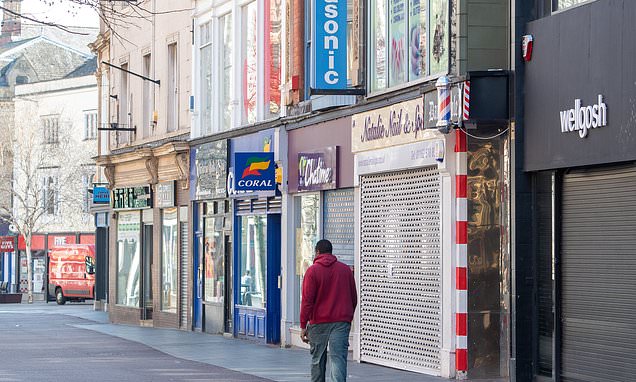