A public scolding of the C.D.C. chief was only the latest but perhaps the starkest instance when the president has rejected not just the policy advice of his public health officials but the facts and information that they provided.

WASHINGTON — President Trump on Wednesday rejected the professional scientific conclusions of his own government about the prospects for a widely available coronavirus vaccine and the effectiveness of masks in curbing the spread of the virus as the death toll in the United States from the disease neared 200,000.

In a remarkable display even for him, Mr. Trump publicly slapped down Dr. Robert R. Redfield, the director of the Centers for Disease Control and Prevention, as the president promised that a vaccine could be available in weeks and go “immediately” to the general public while diminishing the usefulness of masks despite evidence to the contrary.

The president’s comments put him at odds with the C.D.C., the world’s premier public health agency, over the course of a pandemic that he keeps insisting is “rounding the corner” to an end. Mr. Trump lashed out just hours after Dr. Redfield told a Senate committee that a vaccine would not be widely available until the middle of next year and that masks were so vital in fighting the disease caused by the coronavirus, Covid-19, that they may even more important than a vaccine.

“I think he made a mistake when he said that,” Mr. Trump told reporters. “It’s just incorrect information.” A vaccine would go “to the general public immediately,” the president insisted, and “under no circumstance will it be as late as the doctor said.” As for Dr. Redfield’s conclusion that masks may be more useful than a vaccine, Mr. Trump said that “he made a mistake,” maintaining that a “vaccine is much more effective than the masks.”

The sharply divergent messages further undercut any effort to forge a coherent response to the virus that the United Nations secretary general on Wednesday called the “No. 1 global security threat in our world today.” With Mr. Trump saying one thing and his health advisers saying another, many Americans have been left to figure out on their own whom to believe, with past polls showing that they have more faith in the experts than their president.

The public scolding of Dr. Redfield was only the latest but perhaps the starkest instance when the president has rejected not just the policy advice of his public health officials but the facts and information that they provided. Public health officials are in strong agreement about the value of masks even as Mr. Trump generally refuses to wear one, mocks his opponent for doing so and twice in the past two days questioned their utility based on the advice of restaurant waiters.

Likewise, health officials have said that it will be many months before a vaccine can be distributed to the population at large, allowing life to begin returning to a semblance of normal, even as Mr. Trump has promised to approve one in time for the general election on Nov. 3. By Mr. Trump’s own account, he personally called Dr. Redfield after Wednesday’s hearing to challenge his testimony, renewing questions about pressure on scientists who are supposed to be isolated from partisan politics.

But with the election looming, Mr. Trump is intent on convincing the public that the worst is behind the country. He has repeatedly expressed no regret about his handling of the threat, even with the death toll mounting. “We did a great job except, public relations-wise, my people got outplayed,” he told Greta Van Susteren of Gray Television on Wednesday.

Former Vice President Joseph R. Biden Jr., the Democratic presidential nominee, said Mr. Trump’s undisguised fixation on the election calendar in declaring when a vaccine will be available has damaged his own credibility.

“So let me be clear. I trust vaccines. I trust the scientists. But I don’t trust Donald Trump,” Mr. Biden said. “And at this moment, the American people can’t either.”

The president’s defiance of public health guidelines led to a sour moment on Wednesday with one of the United States’ closest allies overseas. Israeli Health Ministry officials watching an Arab-Israeli ceremony this week at the White House on television grew angry at the lack of masks and social distancing, and they ordered Israeli reporters returning from Washington to quarantine. Secretary of State Mike Pompeo was spotted at the event without a mask, coughing while talking with the head of Israel’s Mossad spy agency.

A day after the ceremony, which drew together hundreds of people on the South Lawn, a Trump administration official tested at the White House was confirmed positive for the coronavirus. The official, who was not publicly identified, was not present for the ceremony, and authorities began tracing the person’s contacts to try to stop any further spread. “It’s not anybody that was near me,” Mr. Trump said.

The political fallout related to the virus claimed another Trump administration official on Wednesday when Michael R. Caputo, a political ally of the president’s installed at the Department of Health and Human Services, took a leave of absence after a conspiracy-filled rant about federal scientists plotting “sedition” against Mr. Trump.

At his Senate hearing, Dr. Redfield said vaccines may be available in November or December, but only a “very limited supply” at first that would go initially to health care workers and the most vulnerable Americans. Such a vaccine, he said, would not be widely distributed until next summer or later, echoing recent comments by Dr. Anthony S. Fauci, the government’s top infectious disease specialist.

“If you are asking me when is it going to be generally available to the American public so we can begin to take advantage of vaccine to get back to our regular life, I think we are probably looking at third — late second quarter, third quarter 2021,” Dr. Redfield told the senators.

He also called masks “the most important, powerful public health tool we have” in fighting the pandemic, adding that universal use of face coverings could bring the pandemic under control in months. “I might even go so far as to say that this face mask is more guaranteed to protect me against Covid than when I take a Covid vaccine,” Dr. Redfield said. Vaccines are not 100 percent effective, whereas masks, worn properly, do what they are designed to do.

Just the night before, during a town hall-style forum with undecided voters in Philadelphia hosted by ABC News, Mr. Trump had denigrated masks, saying that “there are people that don’t think masks are good.” Asked which people, he cited restaurant waiters who fiddle with their masks and therefore may accidentally spread the virus as they serve food.

Mr. Trump repeated that on Wednesday at his briefing with reporters. “I see that in restaurants there are people with masks and they’re playing around with their mask and their fingers are in their mask and then they’re serving with plates,” he said. “I think there’s a lot of problems with masks.” He said that “the mask perhaps helps” but that it “is a mixed bag.”

The president has generally refused to wear a mask in public himself, saying it was unnecessary because he is regularly tested for the coronavirus. But he has held numerous rallies and other events in recent days where most of the people were not tested, did not have face coverings and were not kept at a social distance.

As he has on other occasions, Mr. Trump ridiculed Mr. Biden for regularly wearing a mask, saying his opponent did so even when he was distant from other people. “Joe feels very safe in a mask,” the president said. “I don’t know, maybe he doesn’t want to expose his face.”

The president’s comments came at a briefing where he again presented a glossy view of the pandemic, displaying charts meant to indicate that it was under control. He framed the crisis through a partisan lens, suggesting that fatalities in states that vote for Democrats should not be counted. “If you take the blue states deaths out, we are at a level I don’t think anybody in the world would be at,” he said.

As for the vaccine, he offered what experts called a highly unrealistic timetable for distribution. “We will distribute at least 100 million vaccine doses by the end of 2020,” he said. He insisted it would not be limited at first to high-priority cases, as doctors have said.

After the president’s public dressing down, Dr. Redfield tried to smooth over the rift by recalibrating his own answers from earlier in the day.

“I 100 percent believe in the importance of vaccines and the importance in particular of a Covid-19 vaccine,” he said in a statement. “A Covid-19 vaccine is the thing that will get Americans back to normal everyday life. The best defense we currently have against this virus are the important mitigation efforts of wearing a mask, washing your hands, social distancing and being careful about crowds.”

His agency issued a separate comment suggesting that Dr. Redfield’s answer on vaccine distribution had been misunderstood.

“In today’s hearing, Dr. Redfield was answering a question he thought was in regard to the time period in which all Americans would have completed their Covid vaccination, and his estimate was by the second or third quarter of 2021,” the statement said. “He was not referring to the time period when Covid-19 vaccine doses would be made available to all Americans.”

“We may have enough vaccine by the end of the year to immunize probably, I would say, between 20 and 25 million people,” Moncef Slaoui, the top scientist on Operation Warp Speed, told NPR this month. “And then we will ramp up the manufacturing of vaccine doses to be able to, based on our plans, have enough vaccine to immunize the U.S. population by the middle of 2021.”

Reporting was contributed by Michael Crowley and Noah Weiland from Washington, Maggie Haberman from New York, and David Halbfinger from Jerusalem.

Joseph R. Biden Jr. assailed President Trump for playing politics with a potential coronavirus vaccine, thrusting the issue to the center of the campaign.

News – Trump Scorns His Own Scientists Over Virus Data 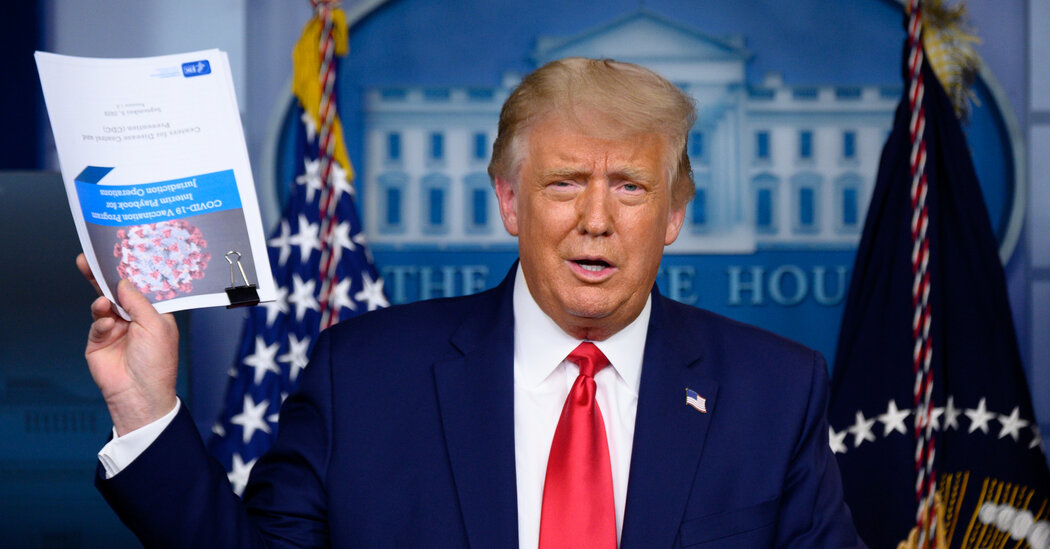