With little more than two weeks to reverse his dismal standing in the polls, and amid a coronavirus resurgence that could sink his pursuit of a second term, Donald Trump has embarked on a tour of battleground states.

New US daily cases of Covid-19 are averaging above 55,000, their highest level since July, according to government figures, and rising in more than 40 states, including many the Republican president must win on 3 November.

Yet despite trailing Democratic challenger Joe Biden by double digits in almost every national poll, all of which show a substantial deficit in approval over handling the pandemic, Trump is continuing to host large rallies with few supporters wearing masks and little social distancing.

Trump was in Nevada on Sunday, attending church in Las Vegas before a rally. Thousands were expected at events in other swing states on Monday (Arizona), Tuesday (Pennsylvania) and Wednesday (North Carolina). Trump is expected to continue to prioritise hopes for economic recovery above measures including new lockdowns.

In an interview on a Wisconsin radio station, Trump was asked if rallies at which mostly maskless supporters are packed tightly together sent the wrong message.

“I don’t think so because I’m not a big shutdown believer,” he said. “If you take a look at your state, they’ve been shut down and they’ve been locked down and locked up and, you know, they’ve been doing it for a long time.”

Trump won Wisconsin by less than one point in 2016 but trails there now by more than seven, according to FiveThirtyEight.com. At a rally in Janesville on Saturday the president insisted again that the fight against the pandemic was being won, despite statistics from the federal Centers for Disease Control and Prevention continually showing the opposite.

Only Vermont and Missouri have reported a decrease in the average number of reported cases over the past week. Connecticut and Florida lead the nation, with increases by 50% or more. Another 27 states rose between 10% and 50%, according to Johns Hopkins University. More than 8.1m US cases have been confirmed, the death toll near 220,000.

On NBC’s Meet the Press on Sunday, the health secretary, Alex Azar, pleaded with the American people to “hang in there with us. We are so close. We are weeks away from monoclonal antibodies for you, for safe and effective vaccines. We need to bridge to that day, so please just give us a bit more time of your individual, responsible behavior of washing your hands, watch your distance, wear your face coverings when you can’t watch your distance.”

As my grandfather would say, ‘This guy’s gone around the bend if he thinks we’ve turned the corner’

In North Carolina on Sunday, Biden told supporters: “As my grandfather would say, ‘This guy’s gone around the bend if he thinks we’ve turned the corner’. Things are getting worse, and he continues to lie to us about circumstances.”

Biden’s running mate, California senator Kamala Harris, canceled events over the weekend after an aide tested positive for Covid-19. She will return to the trail in Florida on Monday, that state’s first day of early in-person voting.

Trump is targeting several states he won in 2016 and cannot afford to lose if he is to secure the 270 electoral college votes he needs to stay in the White House. Polling continues to suggest he is in serious trouble. His deficit to Biden in Pennsylvania, which he won from Hillary Clinton by fewer than 45,000 of 6m votes, is currently more than six points. In Arizona, he trails by about four, the margin by which he won in 2016.

Ronna McDaniel, chair of the Republican National Committee, said she did not believe the polls. “I am seeing more enthusiasm than I saw in 2016,” she told ABC’s This Week. “I study the data every day. We know that our voters are going to turn out on election day. They don’t trust the mail-in balloting as much. They are getting out in these early vote states right now.”

Trump will face Biden on Thursday in a final debate in Nashville, Tennessee, following a first meeting marked by the president’s interruptions and evasions. A second debate was cancelled after Trump contracted coronavirus and spent three days in hospital, then refused to hold the debate virtually.

The resurgence of Covid-19 is one of a number of issues plaguing Trump’s campaign. On Sunday Gretchen Whitmer, the Democratic governor of Michigan who was the subject of a rightwing plot to kidnap and possibly kill her over lockdown measures, accused Trump of “inspiring and incentivising domestic terrorism”.

Whitmer spoke after campaign surrogate Lara Trump insisted her father-in-law was merely “having fun” when he attacked Whitmer and responded to chants of “Lock her up!” at a rally on Saturday.

Whitmer told NBC: “It’s incredibly disturbing that the president of the United States, 10 days after a plot to kidnap me, put me on trial and execute me was uncovered, the president is at it again and inspiring and incentivising and inciting this kind of domestic terrorism.

“It is wrong. It’s got to end. It is dangerous not just for me and my family, but for public servants everywhere who are doing their jobs and trying to protect their fellow Americans. People of goodwill on both sides of the aisle need to step up and call this out and bring the heat down.”

Also on this week’s agenda is the nomination of rightwing judge Amy Coney Barrett to the supreme court. Democrats have criticised the speed at which Republicans are pushing Barrett into the vacancy created by the death of Ruth Bader Ginsburg. But if Republican support holds, they will not be able to stop it. 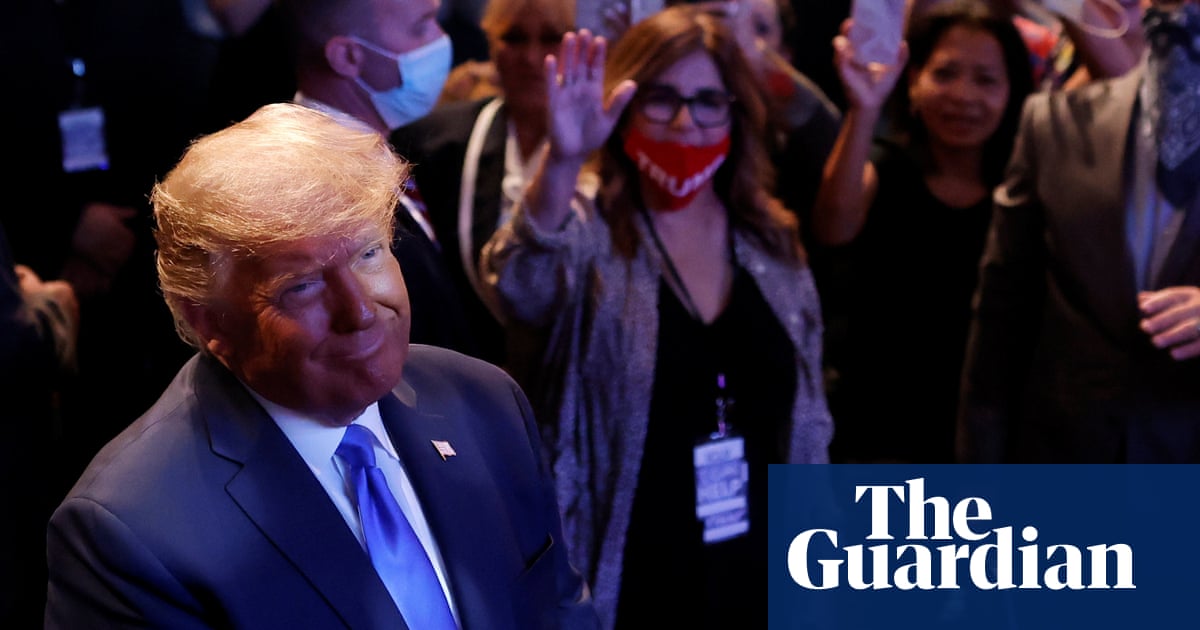