Tens of thousands of people have rallied in solidarity, in dozens of towns and cities across France, after a secondary schoolteacher was beheaded in an attack that has shocked a country already shaken by terrorist atrocities.

Demonstrators gathered on Sunday in cities including Paris, Lyon, Toulouse, Strasbourg, Nantes, Marseille, Lille and Bordeaux in support of free speech and in tribute to Samuel Paty, who was killed outside his school on Friday after discussing caricatures of the prophet Muhammad with his class.

Others held placards aloft declaring “No to totalitarianism of thought”, “I am a teacher” and “Schools in mourning”. Between bursts of applause, others chanted “Freedom of expression, freedom to teach” or sang La Marseillaise.

“We are the result of our history: these values of liberty, secularism and democracy cannot remain just words,” one demonstrator in Paris told French television. “We have to keep them alive, and being here helps do that.”

Many teachers said the killing came amid a climate of growing suspicion and criticism of teachers, with parents particularly willing to intervene. “We have to be allowed to do our jobs,” one teacher told Le Monde. “It cannot be allowed come to this – that I now know I might end up being killed for teaching,” said another.

Before the rallies, the education minister, Jean-Michel Blanquer called on “everyone to support our teachers”, saying “solidarity and unity” was vital. State interior secretary, Marlène Schiappa, said she was attending the Paris rally “for teachers, secularism and freedom of expression, and against Islamism”.

Kamel Kabtane, rector of the Lyon mosque and a senior Muslim figure, said Paty had merely been “doing his job” and was “respectful” in doing so. “These terrorists are not religious but are using religion to take power,” Kabtane told Agence France-Presse.

A national tribute will be organised for Wednesday, the Élysée Palace announced. The prime minister, Jean Castex, who attended the Paris rally along with opposition leaders and the city’s mayor, Anne Hidalgo, said the government was working on a strategy to better protect teachers from similar threats.

“I want teachers to know that, after this ignoble act, the whole country is behind them,” Castex said. “This tragedy affects each and every one of us because, through this teacher, it is the republic that was attacked.”

The 47-year-old history and geography teacher was repeatedly attacked with a 30cm butcher’s knife outside the Bois-d’Aulne secondary school in Conflans-Sainte-Honorine, about 20 miles north-west of Paris, by an 18-year-old assailant.

Named as Abdullakh Anzorov, the attacker was shot dead by police soon afterwards when he fired at officers and tried to stab them as they closed in on him. He was born in Moscow of Chechen parents, authorities said, and had arrived in France aged six where he had been granted refugee status along with his family.

Anzorov lived in Évreux, about 60 miles from Conflans, had not attended the school and, while he had a record for vandalism and fights as a child, had no known radical or Islamist affiliations, French media reported.

A Twitter account under the name Abdoulakh A belonging to the suspect posted a photo of the decapitated head from the attacker’s mobile phone minutes after the attack, along with the message: “I have executed one of the dogs from hell who dared to put Muhammad down.”

Earlier this month, as part of a class discussion on freedom of expression and alongside cartoons and caricatures of different subjects, Paty showed his pupils two of the caricatures of the prophet Muhammad published by Charlie Hebdo.

According to parents and teachers, the teacher had given Muslim children in his class the option to leave the classroom or turn away before he showed the two cartoons, saying that he did not want their feelings hurt.

France’s antiterror prosecutor, Jean-François Ricard, said on Saturday that the teacher had been the target of multiple online threats for showing the cartoons to his class. Depictions of the prophet are widely regarded as taboo in Islam.

The father of one girl at the school had launched an online appeal for a “mobilisation” against the teacher, demanding he was fired. He also named Paty and gave the school’s address in a social media post days before the attack.

A known Islamist militant accompanied some parents to the school to argue their case, and helped file a formal police complaint. The schoolgirl’s father and the Islamist leader, along with four members of Anzorov’s family, are among 11 people arrested, including one person detained on Sunday.

Friday’s attack was the second of its kind since a trial started last month over the Charlie Hebdo massacre. The magazine republished the cartoons in the run-up to the trial, and last month a young Pakistani man wounded two people with a meat cleaver outside the magazine’s former office.

News – Thousands rally across France in tribute to murdered schoolteacher 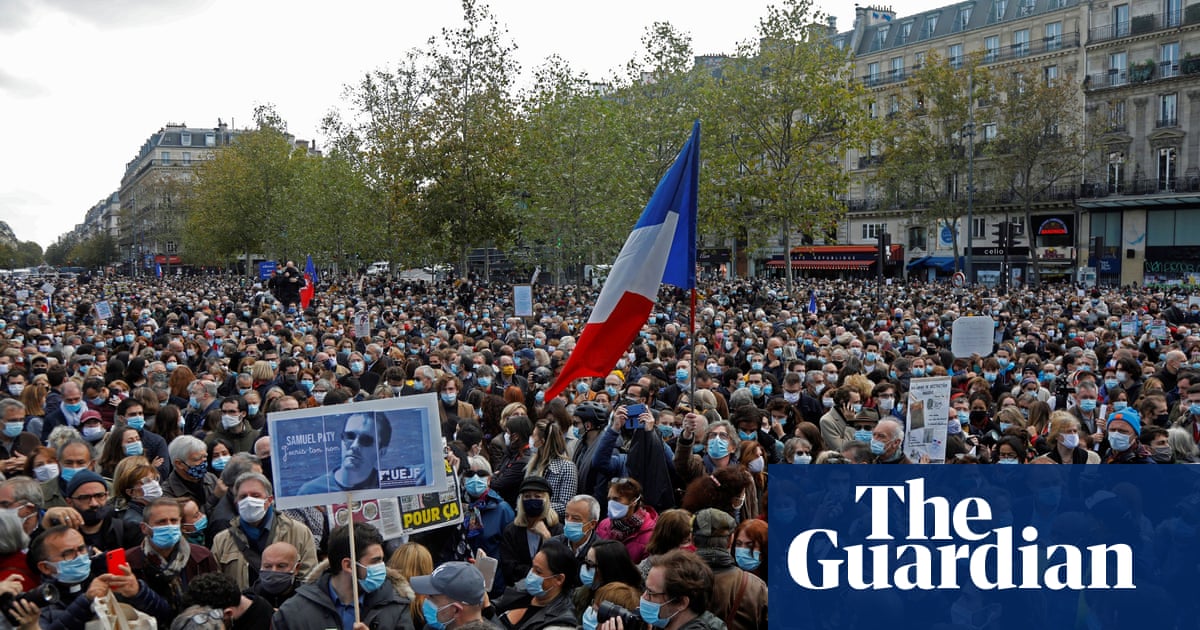