The US Democratic presidential candidate has sparked fury after he warned the UK it must honour the Northern Irish peace deal as it extracts itself from the EU or there would be no US trade deal. A former Cabinet minister hit back saying Mr Biden, who is going up against US President Donald Trump, is a “Brexit and Boris hater”.

They claimed he “doesn’t understand” the threat to the Good Friday Agreement comes from Northern Ireland being separated from the UK’s internal market.

They hailed US Secretary of State Mike Pompeo, who said on Wednesday a UK/US trade deal was on track, telling Politico.eu Mr Trump “trusts” Mr Johnson to “get this right”.

“It is also called the Belfast Agreement so it doesn’t offend both traditions. Did you actually know that? I was born in NI and I’m a Catholic and a Unionist. Here if you need help.”

While junior health minister Edward Argar said he did not believe the 1998 Northern Irish peace deal was at risk in a warning shot to Mr Biden.

Nigel Farage tweeted in response: “We can see that Biden would be an anti-British US President. Wake up everyone.”

“I sincerely hope this latest intrusion into UK affairs is dismissed for the unhelpful nonsense that it is.”

One added: “I never thought I would feel so strongly that I would want Trump to win or even countenance such a thought. But Biden would be no friend to the UK.”

It comes after Mr Biden said in a tweet: “We can’t allow the Good Friday Agreement that brought peace to Northern Ireland to become a casualty of Brexit.

“Any trade deal between the US and UK must be contingent upon respect for the Agreement and preventing the return of a hard border. Period.”

Mr Biden, who has talked about the importance of his Irish heritage, also retweeted a letter from Eliot Engel, chair of the Foreign Affairs Committee of the US House of Representatives, to Mr Johnson calling on the British leader to honour the 1998 Good Friday peace deal.

Mr Engel urged Mr Johnson to “abandon any and all legally questionable and unfair efforts to flout the Northern Ireland protocol of the Withdrawal Agreement.”

He called on the Tory leader to “ensure that Brexit negotiations do not undermine the decades of progress to bring peace to Northern Ireland and future options for the bilateral relationship between our two countries.”

Mr Engel said Congress would not support a free trade agreement between the US and UK if Britain failed to uphold its commitments with Northern Ireland.

Mr Johnson unveiled legislation that would break parts of the Brexit divorce treaty relating to Northern Ireland, blaming the EU for putting a revolver on the table in trade talks and trying to divide up the UK.

He said the UK has to have the ability to break parts of the 2020 Brexit treaty he signed to uphold London’s commitments under the 1998 peace deal which ended three decades of sectarian violence in Northern Ireland between pro-British Protestant unionists and Irish Catholic nationalists.

But Brussels has warned any breach of the Brexit treaty could sink trade talks and thus complicate the border between the UK’s Northern Ireland and EU-member Ireland.

News – Stay out of it, Joe! Biden hit with furious backlash after wading into Brexit trade row 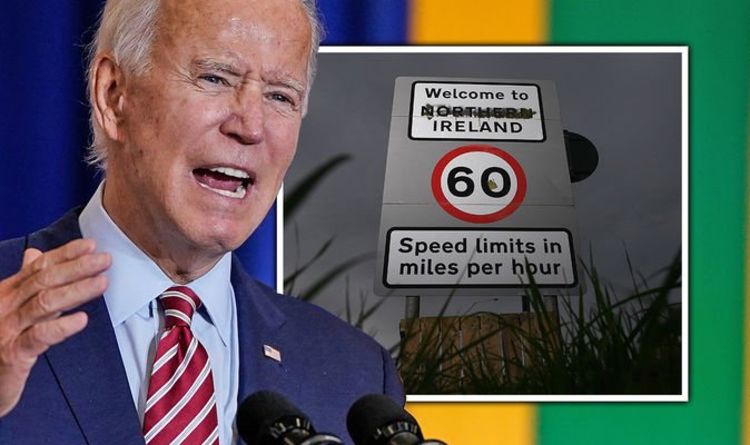