A cut cable, an equipment failure at a data center, an online traffic overload that crashed a website — online voter registration systems have already had their share of snafus this election season, amid record-breaking registration totals in battleground states. With registration deadlines approaching in more than a dozen states, voting rights groups and party officials warn there could be more glitches on the horizon, resulting in the disenfranchisement of would-be voters.

Registration deadlines were extended last week in Virginia and two weeks ago in Florida after web outages prevented residents from registering online for hours, prompting lawsuits from voting rights groups and even allegations of voter suppression.

Jeanette Senecal, senior director of mission impact at the League of Women Voters, said other states should be taking the outages seriously because online systems in states across the country sometimes fail even on regular days.

“It can also forecast problems with the state system to support their polling place finder or their ballot lookup or their voter verification system,” she warned. “All of these systems to tend to be connected to one another.”

With President Donald Trump on the ballot against former Vice President Joe Biden and control of the Senate up for grabs, the general election could see record turnout. More than 27 million Americans have already voted, one-fifth of the total votes tallied in the 2016 presidential race, according to the U.S. Elections Project, and several battleground states are seeing more registrations than ever before.

Georgia reported a record-high of nearly 7.6 million registered voters, 734,000 of whom registered online. A court extended Arizona’s Oct. 5 deadline to last Thursday, though a record-high almost 4 million residents had already registered to vote as of August, according to the secretary of state’s office.

More than 14.4 million voters have registered in Florida, its Department of State said last week, a total that bests its 2016 figure by more than 1 million. Almost 8.1 million Ohioans were registered to vote as of Wednesday, the secretary of state’s office said, narrowly topping its 2018 high. And nearly 3.4 million voters are registered in South Carolina, outpacing totals from the 2016 and 2018 elections.

Americans are turning to online voter registration as a safe method during a coronavirus pandemic that has infected more than 8 million Americans and killed upwards of 219,000 people in the U.S. “This year, clearly with Covid, more people are relying on online systems than in past years because in-person activities are just not as acceptable and available as they have been in the past,” Senecal said.

Alexandria residents wait in a socially distanced line to cast their ballots for the November presidential election on first day of early voting in Virginia. | John McDonnell/The Washington Post via AP

A federal judge in Virginia last week extended the state’s voter registration deadline to 11:59 p.m. Thursday. The original deadline was Tuesday, the same day the website crashed after a cable was severed. U.S. District Judge John Gibney Jr. said the outage caused “a tremendous harm” to people who wanted to register to vote.

Florida extended its Oct. 5 deadline to 7 p.m. on Oct. 6 after its system crashed two weeks ago. Secretary of State Laurel Lee said that at one point the state’s voter registration website was accessed by more than 1 million requests per hour, “an extremely high volume of traffic.”

Voting rights groups filed suit in Florida and Virginia following the deadline day snafus, warning that the outages disenfranchised people who tried to register but couldn’t. The Florida Democratic Party called the website malfunction “blatant voter suppression,” and the American Civil Liberties Union of Florida said the state’s online system “has a suspect history of crashing just before key deadlines,” blaming Republican Gov. Ron DeSantis and Lee, the secretary of state, for knowing but doing nothing.

Voting rights groups in Virginia similarly noted that Tuesday wasn’t the first time Virginia’s system has failed. “This now marks two presidential election cycles in a row in which the state’s registration system has collapsed,” Kristen Clarke, president and executive director of the Lawyers’ Committee for Civil Rights Under Law, said in a statement, “and we hope that this will counsel in favor of stronger systems and backstops to prevent mass disenfranchisement in the future.”

Louisiana also suffered a recent system failure — albeit last month, on National Voter Registration Day. Its website went down for three-and-a-half hours due to what Secretary of State Kyle Ardoin called “an unfortunate error” that allowed routine maintenance to occur that night. Democratic New Orleans Mayor LaToya Cantrell called the mistake “beyond reprehensible” and a “dereliction of duty” by the Republican official at a critical time.

And Pennsylvania’s voter registration web page and other online services went dark over the first weekend of October after equipment at a data center broke.

While it’s unclear how many people were unable to register during the outages, Senecal from the League of Women Voters said many of those people do come back and try again.

“One of the things that’s really helpful is that a number of organizations like the league, we have systems where voters can start or complete their registration process online, so we actually know if there are people who try to start the process, say in Virginia, and weren’t able to complete it,” she said. “We can then follow up with those people … All of the nonprofits who do this type of work that are using systems that enable that have the ability to reach back out to their voters.”

Despite the recent website outages in Virginia, Florida, Louisiana and Pennsylvania, some officials in states with upcoming voter registration deadlines are expressing confidence that their systems will operate smoothly.

POLITICO reached out to elections offices in five states with registration deadlines in the next week — four battlegrounds and California. Two expressed confidence in their systems to withstand any surge, and one said the issue needed to be discussed internally before commenting publicly.

“We are confident in the ability of our system to handle registration requests up to and through Election Day, as is allowed by Michigan law,” said Aneta Kiersnowski, press secretary of Michigan Secretary of State Jocelyn Benson.

Michigan is one of several states whose voter registration deadline is on Monday. But Michigan is “an automatic voter registration state, meaning any time you conduct a transaction at our branch offices, you are either registered or your registration is updated unless you decline it,” Kiersnowski said. “Our deadlines and this process allows the volume of registrations and updates to be better spread out over time.”

Kevin Hall, a spokesperson for Iowa Secretary of State Paul Pate, said, “We have confidence in the system.” Iowa’s Oct. 24 deadline “is a preregistration deadline,” Hall added, noting that that Iowans can register up to and on Election Day at the polls. Nineteen other states and Washington, D.C., also allow people to register in person on Election Day.

An automated email reply from the Pennsylvania Department of State encouraged a POLITICO reporter to call the office for “urgent matters,” citing delayed email response times due to an increase in inquiries. The reporter was No. 26 in a queue but hung up after more than 90 minutes of hold music.

By signing up you agree to receive email newsletters or alerts from POLITICO. You can unsubscribe at any time. This site is protected by reCAPTCHA and the Google Privacy Policy and Terms of Service apply.

Even though elections officials have projected confidence that no digital issues will plague them, elected officials and party officials were more wary.

Brendan Welch, a spokesperson for the Pennsylvania Democratic Party, highlighted in-person alternatives, “[i]n the event that the SURE (Statewide Uniform Registry of Electors) system does have issues on Monday,” the commonwealth’s registration deadline.

“Nobody can say they’re not worried this election year. You can’t,” Rep. Debbie Dingell (D-Mich.) said in an interview. “You wouldn’t be sane if you weren’t worried.”

But in Michigan, she said, Benson, the secretary of state, Gov. Gretchen Whitmer, Attorney General Dana Nessel and others are working hard to make sure people get registered and vote.

“I’m not saying I’m not worried,” Dingell said, “but I sure know we’re working hard to try to address all the problems.”

News – States brace for surge of voter registrations as deadlines near 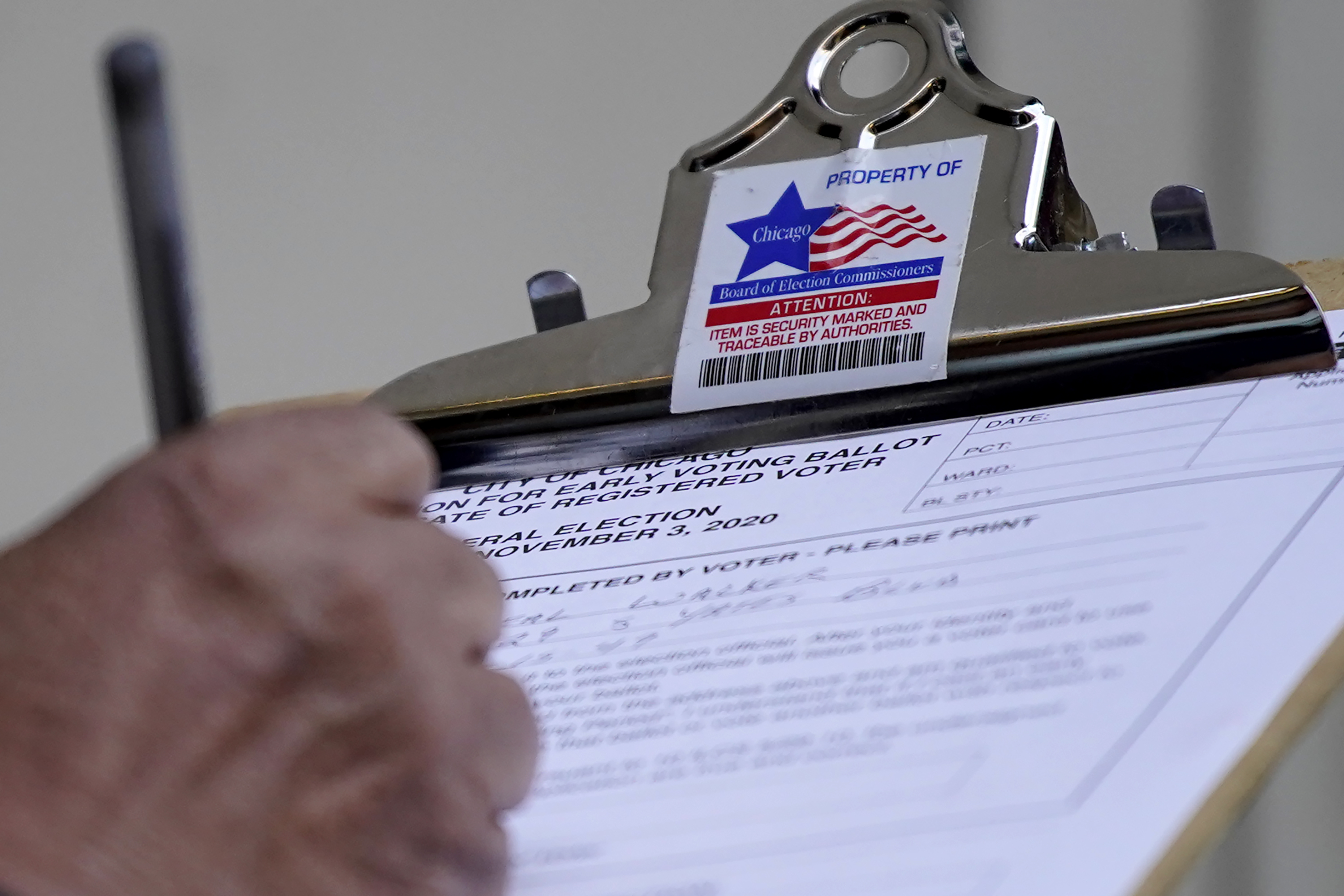