A 4.5-magnitude earthquake rocked Southern California, with tremors felt from Los Angeles down to San Diego.

The quake hit 10 miles west of L.A. at 11.39 pm local time on Friday, according to the US Geological Survey.

It occurred at andepth of nearly 11 miles, and lasted for 30 seconds. It was reported to be one of the biggest earthquakes to hit the L.A. area in years.

There have been no reports of injuries or damage to property, but authorities warned locals to prepare for aftershocks.

The Los Angeles Fire Department posted a tweet shortly after the quake, which read: ‘If Inside When Shaking Starts: DROP, COVER, HOLD ON! Protect Your Head & Neck While Taking Cover Under Sturdy Furniture or Near a Sturdy Interior Wall, Away From Windows and Doorways Until Shaking Stops.

A 4.5-magnitude earthquake has rocked Southern California, with tremors felt from Los Angeles down to San Diego

One seismologist stated that Friday’s quake occurred in almost the exact same location as the Whittier Narrows earthquake in October of 1987.

One TikTok user was partway through a performance, when her house began to rattle as the tremors hit.

Another wrote on Twitter: ‘Felt the biggest earthquake in Los Angeles   yet. It was so big I ran out of my apartment with my purse and no shoes.’

The experts fear the result could be a catastrophic 7.4-magnitude earthquake that would cause massive loss of life and billions of dollars in damage.

The 6.7-magnitude Northridge earthquake rocked the L.A’s suburbs on January 17, 1994, causing more than $20 billion in damage and killing 60 people.

A Los Angeles freeway is pictured in the aftermath of the 6.7-magnitude Northridge quake in January 1994

A fault line, long believed to be dormant underneath Los Angeles, could link with others and cause a major magnitude 7.4 quake, according to a report published in September 2019.

The ‘Wilmington Fault,’ was so deep below the Earth’s surface that it was difficult to study, but researchers from Harvard, the USC  and the US Geological Survey last year imputed a ‘cluster of clues’ into a three-dimensional model that revealed activity not previously detected.

Research indicates that the Wilmington Fault is usually supposed to rupture every 3,200 to 4,700 years – however it has been dormant now for millions of years.

There are fears for the communities of Los Angeles and Long Beach, which are built on the Wilmington Fault.

‘I hope bringing attention to it can potentially increase safety in the region,’ study author Franklin Wolfe, a doctoral candidate who is part of Harvard’s structural geology and Earth resources group, said at the time of publication.

News – Southern California is rocked by a 4.5 magnitude earthquake 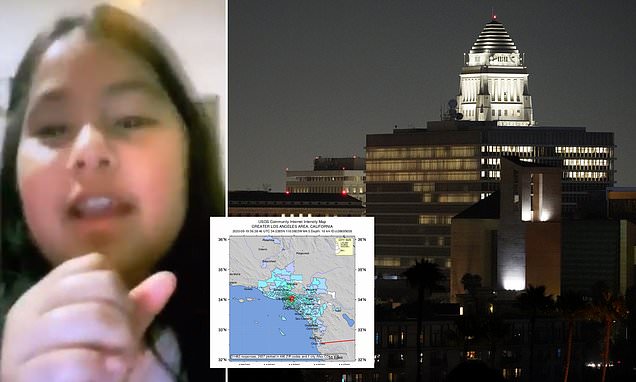