Ms. McBride, who would be the first openly transgender person to serve in any stateâs senate, won a primary for a safely Democratic seat in Delaware.

Ms. McBride, 30, defeated a token primary challenger and is widely expected to win the November general election â the Wilmington-based seat is safely Democratic and is being vacated by Harris B. McDowell III, who is retiring after representing the district for 44 years.

Ms. McBride said in an interview that she wanted her victory to inspire others. âMy hope is that this result can help reinforce for a young kid trying to find their place in this world, here in Delaware or anywhere else in this country, that this democracy is big enough for them, too,â she said.

âRight now in America, we are seeing voices that for so long were pushed to the margins and to the shadows finally being heard,â she added.

Ms. McBride is no newcomer to national or local politics. In 2012 she became the first openly transgender person to work at the White House when she was an intern during President Barack Obamaâs administration. She later lobbied the Delaware state legislature on behalf of a transgender rights bill, which was signed into law in 2013, and is now a national press secretary for the Human Rights Campaign, the nationâs largest L.G.B.T.Q. civil rights group.

In 2016 she became the first transgender person to speak at a major partyâs national convention when she took the stage before Democrats in Philadelphia.

âSarah is the epitome of what can make an elected official great,â said Alphonso B. David, the Human Rights Campaign president. âTonight, she takes the first step on what I expect to be a storied career in the public realm.â

Battles over transgender rights have played out in state legislatures across the country, with conservative lawmakers in more than two dozen states introducing anti-transgender measures this year.

No openly transgender person has been elected to any stateâs senate, though four transgender lawmakers currently serve in lower chambers of state legislatures. Like those politicians, Ms. McBride said she had not focused on identity while campaigning. Her would-be constituents, she said, are far more concerned about her views about health care and education policy.

âMy identity and the symbolic ramifications of my elections, that doesnât come upâ in conversations with voters, she said. âWhat comes up is that we need creative and courageous leadership that will meet this moment with meaningful action for peopleâs lives.â

Democrats also renominated Senator Chris Coons of Delaware, a 10-year-incumbent, for a second full term. Mr. Coons turned back a progressive challenger, Jessica Scarane, who never attracted the kind of financing or enthusiasm that propelled other liberal candidates who took on centrist Democratic incumbents this year.

Ms. Scarane had hoped to tap into the enthusiasm that launched progressive challengers to victories over veteran Democratic congressmen in Chicago, St. Louis and the Bronx. But Delawareâs 2020 Senate race never became a cause cÃ©lÃ¨bre on the left.

A poll conducted last month by a confederation of progressive organizations considering investing in the race on Ms. Scaraneâs behalf found Mr. Coons leading by 40 percentage points, a margin sufficient to dissuade them from spending money to help Ms. Scarane.

Mr. Coons still took the race seriously and used an enormous fund-raising advantage to blanket Delawareans with television ads, spending nearly $800,000 compared with Ms. Scaraneâs $65,000. The only third-party organization to devote significant resources to the race was the American Chemistry Council, which aired more than $200,000 in ads backing Mr. Coons.

Ms. Scarane, who moved to Delaware from New York 10 years ago, did not have the profile of other left-wing upstarts who have toppled incumbent centrist Democrats. Progressive organizations had first sought to recruit a woman of color to support in the race. Kerri Evelyn Harris, a Black progressive organizer, gave Delawareâs other Democratic senator, Tom Carper, a brief scare in 2018 before Mr. Carper prevailed by nearly 30 percentage points. 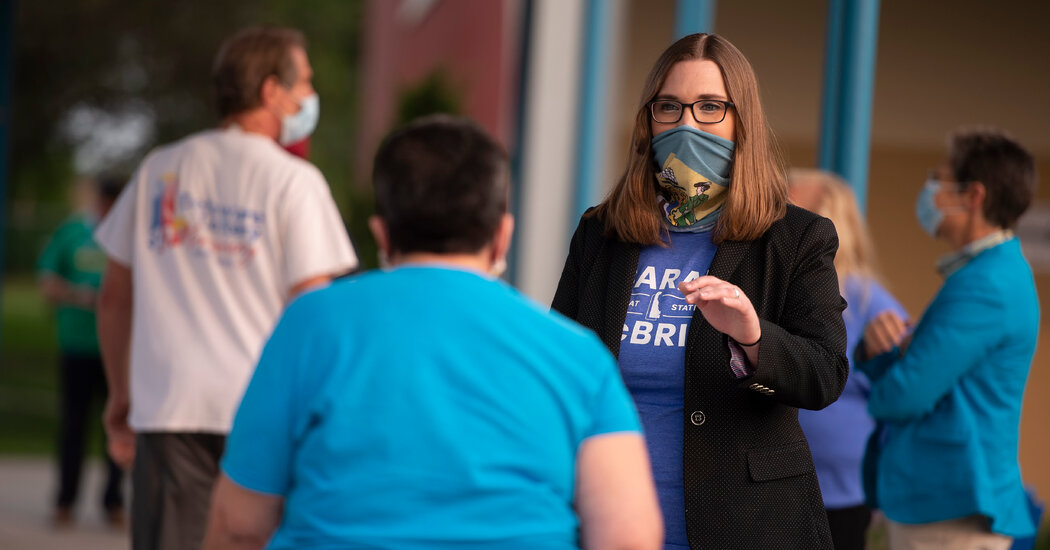