The Belgian MEP blasted eurosceptic leaders across the Brussels bloc and lashed out against European Union institutions failing to act against those who threaten the prosperity of the Union. Mr Verhofstadt urged European Commission President Ursula von der Leyen to repeat her 75-minute state of the union speech in the European Council as he claimed all the issues raised by the Commission leader are systematically ignored by some EU leaders.

He said: “My proposal is that you repeat this 75 minutes of your speech that I liked a lot, also in the Council.

“Because let’s be honest, half of the issues that you raised are in fact blocked in the Council.

“When we talk about migration, the tragedy in the Moria camp, that’s the consequence of the impossibility to reform Dublin, to reform the migration policy.

“When we are talking about Belarus, it’s 40 days after this election has been stolen by Lucachjemnclp and we are not capable to put sanctions on the table.

“When we’re talking about Turkey drilling in the east Mediterranean in Greeks waters, no sanctions, no actions at all.

“And when we talk about the rule of law inside the European Union, let’s be honest, it’s five, six years that we are talking about that here in Europe and the European Parliament.

“There are no sanctions against these authoritarian regimes. So my plea to you is repeat this the fastest as possible in the Council and let’s make a pact, a deal between us, that that is the priority for 2021.”

The European Union’s chief executive on Wednesday painted a sober picture of the bloc grappling with a pandemic and the deepest recession in its history, but laid out ambitious goals to make the 27 nations more resilient for future crises.

In her annual State of the Union address, European Commission President Ursula von der Leyen doubled down on the flagship goals she set out when she took office last December: action to protect the climate and a digital revolution.

She unveiled a plan to cut EU greenhouse gas emissions by at least 55 percent from 1990 levels by 2030, up from an existing target of 40%, and called for greater investment in technology for Europe to compete more keenly with China and the United States.

Officials said that, far from backing off the plans she laid out at the beginning of her term because of the coronavirus crisis, von der Leyen believes they will be key to Europe’s economic and political survival.

The EU has been buffeted for years by crises, from the financial meltdown of 2008 to feuds over migration and the protracted saga of Britain’s exit from the bloc.

Solidarity among the 27 member states frayed badly at the onset of the COVID-19 pandemic, when countries refused to share protective medical kit with those worst-affected and closed borders without consultation to prevent the spread of the virus.

The bloc’s leaders also jousted for months over a joint plan to rescue their coronavirus-throttled economies.

But in July they agreed on a stimulus plan that paved the way for the European Commission to raise billions of euros on capital markets on behalf of them all, an unprecedented act of solidarity in almost seven decades of European integration.

Von der Leyen told the European Parliament in her speech that “this is the moment for Europe” to trust each other and stand together.

“The moment for Europe to lead the way from this fragility towards a new vitality,” she said.

“I say this because in the last months we have rediscovered the value of what we hold in common … We turned fear and division between Member States into confidence in our Union.”

News – ‘Sanctions? No! Actions? No!’ Guy Verhofstadt loses it in European Parliament outburst 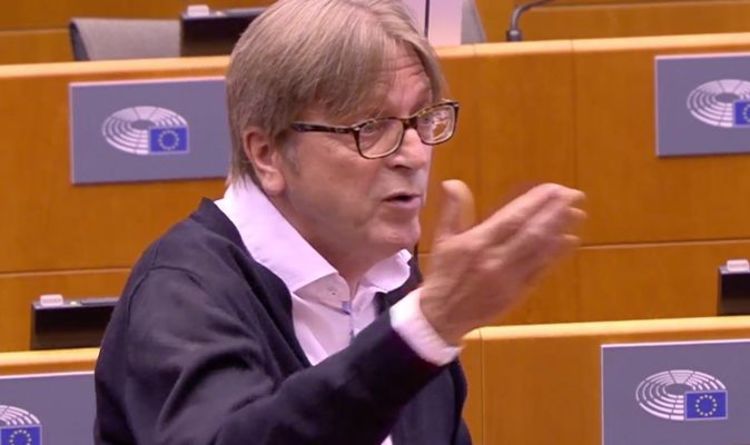