THOUSANDS today paid tribute to the teacher beheaded by a terrorist in Paris – who filmed the brutal killing and shared his footage with ISIS followers.

Aboulakh Anzorov, 18, was shot dead by police shortly after killing teacher Samuel Paty in a northern suburb of the French capital on Friday afternoon.

Samuel Paty, 47, is understood to have been killed because he showed his class a cartoon of the Prophet Mohammed.

After his murder, suspect Anzorov shared pictures and videos online with Chechen ISIS Telegram channels, and also denounced Emmanuel Macron as the “leader of the infidels”.

He posted one graphic image of Mr Paty on social media alongside a threat in French to those who “insult” the prophet.

Anzorov wrote: “In the name of Allah, to Macron, the leader of the infidels, I executed one of your hellhounds who dared to belittle Muhammad (may peace be upon him).”

Thousands denounced the slaughter in France today, with demonstrations up and down the country calling for free speech.

French placards read “No to brutality” and “I am a teacher,” as crowds gathered in Paris, Toulouse and Lille.

Many held signs which read “Je Suis Samuel” – a nod to the freedom of speech slogan “Je Suis Charlie” adopted after the Charlie Hebdo shootings in France, 2015, while others waved French flags above the crowds.

Samuel Paty previously received death threats for producing images of the Prophet Mohammed in a lesson on freedom of expression.

Investigations are focusing on Brahim Chnina, father of a 13-year-old girl in Paty’s class, who denounced the teacher online and gave details of the school. He has since been arrested.

Branding Mr Paty a thug in a video posted on Twitter sometime in the last week, he asked the community to complain about the teacher’s behaviour.  The killer is presumed to have seen the video and acted upon it.

Anzorov, a Russian national of Chechen origin, had been granted a ten-year residency as a refugee in March and was not known to intelligence services.

The jihadi was shot dead by cops after severing his victim’s head with a kitchen knife in the Paris suburb of Conflans-Sainte-Honorine on Friday.

The killer’s uncle told French television: “He was a child. He was only 18. If he were still alive, I would have asked him: ‘Why did you do that? What was going on your head?’ He must have been influenced by someone.”

Anti-terrorism prosecutor Jean-Francois Ricard said an investigation for murder with a suspected terrorist motive was opened.

At least four of those detained are family members of the attacker, while his half-sister joined the Islamic State group in Syria in 2014, Ricard said.

The prosecutor said a text claiming responsibility and a photograph of the victim were found on the suspect’s phone.

A group of Imams in the Lyon region are holding a special meeting Sunday to discuss together what the group called “the appalling assassination of our compatriot by a terrorist who in the name of an uncertain faith committed the irreparable.”

Mr Paty showed one of the illustrations in his civics class a month ago, which displayed the Prophet with a star on his naked bottom with the caption “a star is born”.

Anzorov asked pupils to point Mr Paty out before launching into the frenzied attack, a French anti-terrorism prosecutor today revealed.

The attacker is said to have shouted Allahu Akbar – meaning God is the greatest – as he carried out the bloody killing.

Authorities in France confirmed they are treating the attack as “murder linked to a terrorist organisation”.

He said: “He enjoyed refugee status but had hidden his radical Islamism from the security services.”

Heartbroken colleagues and pupils held white roses and signs reading “Je Suis Enseignant” – meaning “I am a teacher” as they paid tribute to Samuel.

Others have posted on Twitter using the hashtag “Je Suis Prof” in solidarity with the tragic teacher.

He had reportedly invited Muslim pupils to leave the room before showing the cartoon around ten days ago as any depiction of the Prophet is seen as blasphemous.

But one student stayed behind and later told her parents, who filed a complaint against Samuel.

A video was then posted online branding the teacher a “thug” as the community was urged to complain about the lesson.

A colleague said: “Samuel had angered parents by showing a picture of a nude Prophet Mohammed to kids in his freedom of expression class, and there had been threats against him.”

They said: “Charlie Hebdo shares his feelings of horror and revolt after a teacher in the line of duty was murdered by a religious fanatic. We express our deepest support to his family, loved ones and all the teachers.

“Intolerance has just crossed a new threshold and does not seem to stop at nothing to impose its terror on our country. Only the determination of political power and the solidarity of all will defeat this fascist ideology.

“This filthy act mourns our democracy but must make us more combative than ever to defend our freedom.”

The bloodbath erupted when Samuel was discovered decapitated near the school – around 25 miles from Paris – yesterday.

The killer then fled to the nearby town of Eragny-sur-Oise, around two miles away, where he refused to surrender.

Terror cops confirmed they were investigating and were threatened with “weapons” as they swooped on the suspect.

Around ten shots rang out in the quiet suburb as he was gunned down and killed by cops.

French President Emmanuel Macron condemned the horror as he visited the school where the teacher worked last night.

He said: “A citizen has been murdered today because he was a teacher and because he taught freedom of expression.

“The whole country stands behind its teachers. Terrorists will not divide France, obscurantism will not win.”

Just last month, seven people were detained in connection with a knife attack outside Charlie Hebdo’s former offices in Paris.

The deadliest was in 2015 when 130 people were killed in Paris as suicide bombers targeted the Stade de France, cafés, restaurants and the Bataclan music venue.

In July 2016, 86 people were killed and more than 400 injured when a 19-tonne truck was deliberately driven into crowds in Nice. 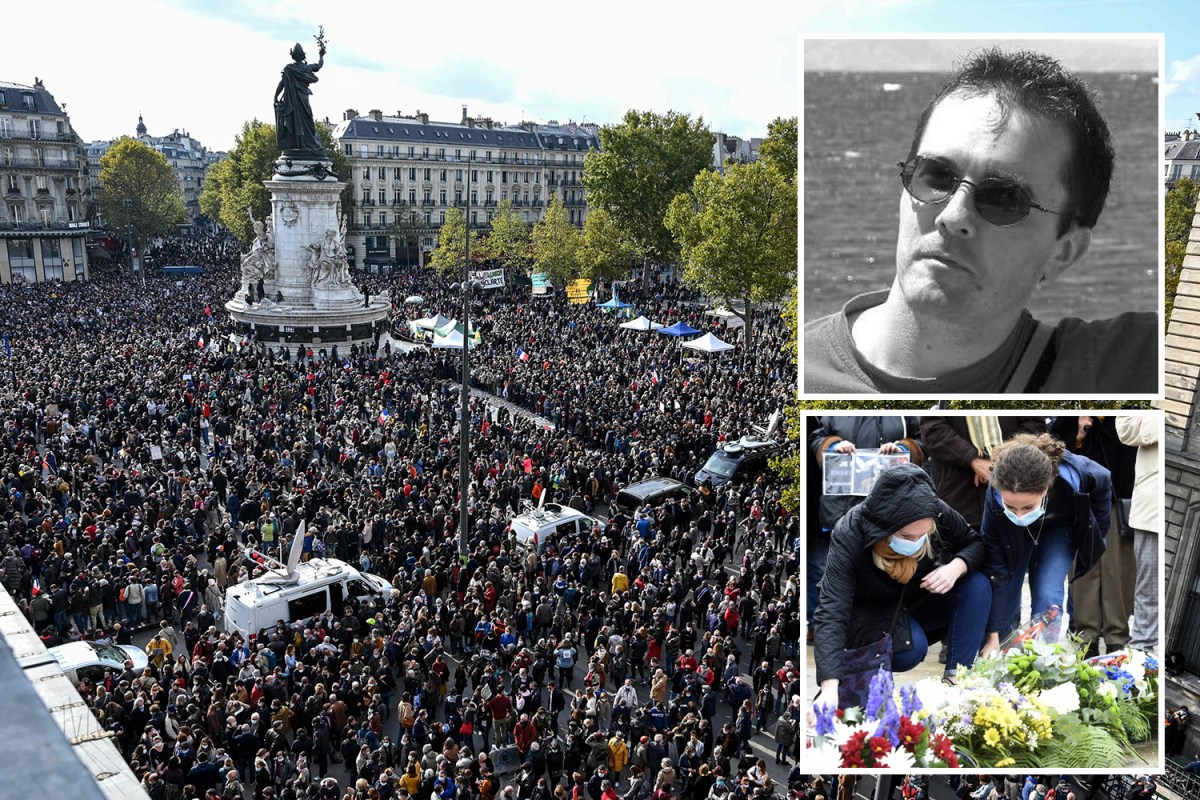