The normalization of relations between Israel and two Arab states is a welcome development. Thereâs still a long way to go toward peace.

The editorial board is a group of opinion journalists whose views are informed by expertise, research, debate and certain longstanding values. It is separate from the newsroom.

The normalization of relations between Israel and two Arab states, the United Arab Emirates and Bahrain, is, on the face of it, a good and beneficial development. The Trump administration deserves credit for brokering it. It has long been an anomaly in Middle Eastern affairs that Arab nations felt compelled to publicly treat Israel as a pariah in their midst, while many of them â including the U.A.E. and Bahrain â pursued all sorts of economic and security links with Israel.

Yet the notion, put forward by one conservative Norwegian lawmaker, that President Trump or the Israeli prime minister, Benjamin Netanyahu, deserves a Nobel Peace Prize for what they are calling the âAbraham Accordsâ is far-fetched, and not just because of their political records or reputations.

Past Nobel laureates who have been honored for advancing peace in the Middle East â Yasir Arafat, Yitzhak Rabin, Shimon Peres, Anwar el-Sadat, Menachem Begin â have not been saints. But their actions required courageously overcoming deep hatreds and ending painful hostilities, for which two of the laureates, Mr. Sadat, then the Egyptian president, and Mr. Rabin, then prime minister of Israel, paid with their lives. By contrast, Israel, Bahrain and the United Arab Emirates have never been in conflict, and the normalization of their ties carried few risks for any of them, while heaping considerable political benefits on Mr. Trump and Mr. Netanyahu.

The agreements, moreover, made only a perfunctory nod to what âMiddle East peaceâ has long referred to: peace between Palestinians and Israelis. The Palestinians, in fact, were not warned in advance that the Emirates was hatching a deal with Israel and the United States, although the catalyst for it was Mr. Netanyahuâs threat to annex much of the West Bank. The threat of annexation had the potential of inflaming Arab citizens. To forestall it, the U.A.E. reportedly turned to the Trump administration with the idea of normalizing relations in exchange for Israel suspending its annexation plans. Bahrain, a tiny kingdom closely tied to Saudi Arabia, followed suit. Oman and Sudan could be next.

The annexation threat was not the only ulterior motive in the agreements. Israel, Saudi Arabia and the Emirates â and the Trump administration â are united in their hostility to Iran. Also, the U.A.E. evidently expected to benefit from the deal by finally being allowed to buy advanced F-35 stealth fighter jets from the United States, though that possibility has sounded alarms in Israel. For Mr. Netanyahu, the normalization provided a political boost at a time when he is facing sharp criticism for his handling of the coronavirus pandemic and a corruption trial, while Mr. Trump welcomed the news during his re-election campaign.

Ulterior motives and national interests are inherent elements in politics and international relations, and even if Mr. Trumpâs primary lieutenant for the Middle East, his son-in-law, Jared Kushner, did not initiate the normalization agreements, he deserves credit for spotting their value and bringing them to fruition. By contrast, Mr. Kushnerâs own peace plan for the Israeli-Palestinian conflict, unveiled in January amid great hoopla, was so tilted to conservative Israeli positions that it was rejected out of hand by Palestinians and effectively eliminated the administration as a mediator in the conflict.

The signing ceremony in Washington on Tuesday demonstrated that the Palestinians have lost their veto power over Arab-Israeli relations. The time when the âinalienable rights of the Palestinian peopleâ was the dominant mobilizing call of the Arab world appears to be over, a fact underscored by the Palestine Liberation Organization in a statement calling the signing ceremony âa black day in the history of the people of Palestine.â

Decades without any substantive progress, combined with growing frustration in many Arab capitals over the corrupt and demanding Palestinian leadership, had steadily pushed the Palestinians to the background in a region more concerned with Sunni-Shiite feuds, a drop in oil prices, conflicts in Syria, Iraq and Yemen and sharp reductions in the American military presence. Israelâs technological and military prowess, in the meantime, gained in allure.

In this process, the Abraham Accords were something of a reality check, a confirmation of a Middle East landscape that had radically changed since the Oslo Accords were signed at the White House in 1993. That El Al flights could now fly openly to Abu Dhabi provides tangible evidence of a Middle East in which Israel was a serious and even welcome player rather than an outcast and enemy. That is a breakthrough, and long overdue.

But a true Middle East peace deal will require an accommodation with the 4.75 million Palestinians in the West Bank and Gaza, a people who have been denied a homeland for more than seven decades. Their plight will continue to draw sympathy and censure from around the world, and their frustration will continue to fuel violence. The two-state solution remains the only viable alternative to either the current state of affairs, or a single country in which Jews are a minority.

The Abraham Accords offered no movement on this front, save the hope that an Israel at peace with the greater Arab world will eventually be more amenable to a just peace with its immediate neighbors. That would justify Mr. Netanyahuâs triumphal talk achieving âpeace for peace.â For now, ânormalizationâ will suffice.

News – Opinion | Trumpâs Middle East Deal Is Good. But Not That Good. 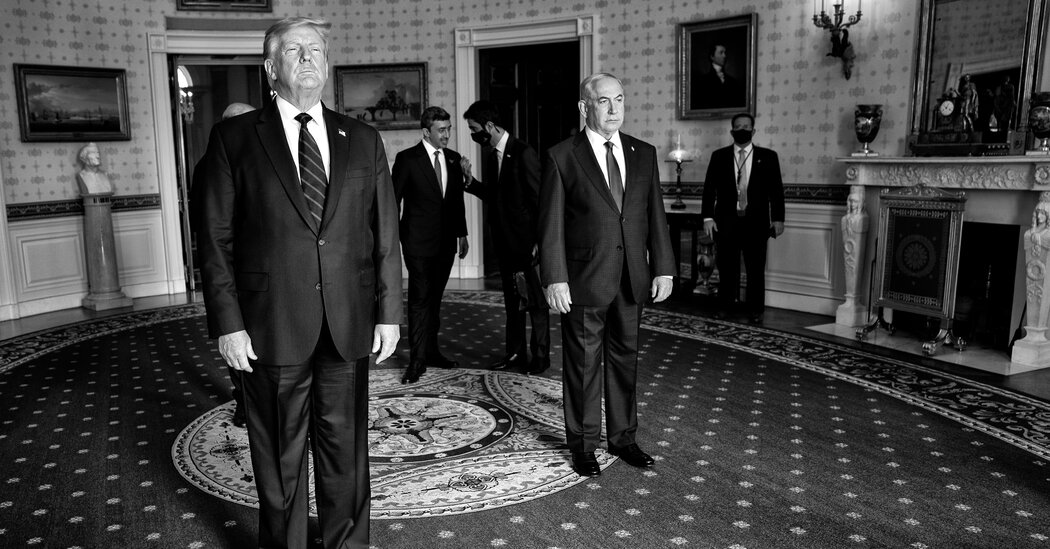