It was almost inevitable that President Trump would get one Supreme Court appointment during this four-year term. It was always possible that heâd get two.

But three? Seldom has a presidentâs impact been so inversely proportional to his warrant. Trump, with his nonexistent mandate, reaches extra far and wreaks extra damage. Thatâs what makes his reign so perverse. Thatâs the special hell of it.

Almost instantly after the news of Ruth Bader Ginsburgâs death, I checked how many Supreme Court justices Trumpâs immediate predecessors had appointed, because I knew how fast he and Mitch McConnell would move to fill her seat. When it comes to this sort of unabashed power grab, theyâre conjoined twins, connected by their contempt for fools who get hung up on hypocrisy and prattle about fairness.

Here, in reverse chronological order, are the five men who occupied the Oval Office over the roughly three decades before Trump took his seat at the Resolute Desk, and their impact on the court:

President Barack Obama appointed two Supreme Court justices: Sonia Sotomayor and then Elena Kagan. That was over two terms, both of which were secured with wide-margin victories in the popular vote as well as the Electoral College.

Obama would have had a third appointment, but Mitch McConnell, of course, blocked that nominee, Merrick Garland, decreeing that a court vacancy nearly nine months before the election should not be filled until afterward, so that the American people could have a fresh chance to weigh in.

Ginsburg died a month and a half before Election Day, and Trump, unlike Obama, took office with the support of a minority of Americans: He got nearly three million fewer votes than Hillary Clinton. No matter! McConnell has had some sort of reformation or revelation and decided that this present is in no way analogous to that past. Just ask Lindsey Graham, who had the same epiphany.

So if Trump succeeds in replacing Ginsburg before the election, heâll match Reaganâs tally in half the time, with a mere fraction of the popular support and respect that the Gipper had. This is what I mean by perverse.

Yes, I know, some people â and some presidents â just get lucky. But no one gets luckier than Trump, and no one deserves it less.

And this particular bit of luck, like his presidency, illuminates a serious and possibly unsustainable flaw in the American political system. Weâre increasingly a country where the minority is not merely protected from the tyranny of the majority, as the nationâs founders intended. Weâre a country where the minority rules, and under Trump, it rules tyrannically.

In 2018, Democrats won 22 of the 35 Senate elections, with candidates who got roughly 17 million more votes than the Republican candidates got. (And Iâm not even counting, among those 22, two independents who caucus with Democrats, Angus King of Maine and Bernie Sanders of Vermont.)

But the structure of the Senate â in which less-populous states get the same say and sway as much more populous ones â favors Republicans. As Philip Bump of The Washington Post observed this week, âThe Senate has since 2014 been controlled by Republicans who cumulatively represent less than half of the country â the longest such stretch in a century.â

Trump is in a position to make that third court appointment because of the Electoral College. As I noted, he lost the popular vote. That does not make him an illegitimate president. But it does advance the argument that weâve drifted too far from one person, one vote, and the Electoral College should be scrapped.

As things stand now, some handicappers theorize that Joe Biden might have to win the popular vote by more than five million ballots to be even remotely confident of an Electoral College victory. That, too, is perverse.

And here we are, on the cusp of a court that wonât represent what most Americans believe. Sure, the court isnât supposed to be beholden to public opinion, but Americansâ faith in their institutions and feeling that their voices are heard might be strained even further by what seem to be lurches backward by a court forged in the hottest flares of partisan passion.

While weâve been reminded several times recently of the folly of guessing how justices will vote, a court with three Trump appointees could well restrict abortion even though most Americans support its legality in all or most cases. Such a court could also revisit gay rights, though an even bigger majority of Americans support marriage equality and an overwhelming majority believe that gay Americans should be protected from employment discrimination. It could look anew at various aspects of voting rights and affirmative action.

Were this to happen, it wouldnât be because a president with deep-seated convictions was expressing them through the court. Rather, the most brazen of opportunists is continuing the politicization of the court and bending it to his re-election. His deliberations seem to take into account not only which justice or justices might energize evangelical voters the most, but also whether potential nominees are from battleground states. (Judges from Florida, Michigan and North Carolina have been floated.)

On this front as on all others, Trump is propelled not by a genuinely felt vision for the country but by a genuinely insatiable ego. Heâs a bully who likes to dominate â in any way available, to the fullest extent possible â and heâs running rampant, just for the adrenaline rush of it.

As Ashley Parker of The Washington Post reported this week, Trump gloated to Bob Woodward about how many judges he and McConnell had put on the federal bench and how much of that bench bore Trumpâs imprint. âThe only one that has a better percentage is George Washington, because he appointed 100 percent,â Trump told Woodward. âBut my percentage is, you know, like, ridiculous.â 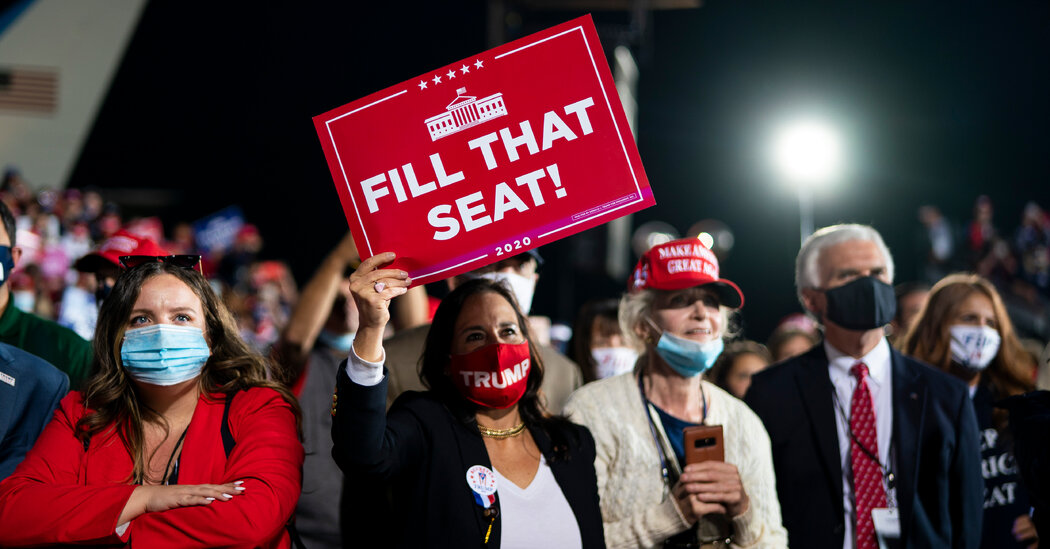