Then, one morning in August, I walked down our dirt road with the dog. Mist was rising off Long Pond. When we got home, I found a small stone among the snapdragons and joe-pye weed in our garden. Someone had painted it with a rainbow. On one side were the words âYou matter.â

This turned out to be one of a series of painted rocks that an anonymous person, or persons, have been leaving around my neighborhood. Some of the messages on them are generic, like âMaine: The way life should be.â But others seemed specific to their recipients. In front of the house of a neighbor with lots of children was a red rock inscribed with âKids are great.â In the garden of a new arrival to our tiny Maine neighborhood: âWelcome to the lake.â By the house of a couple with a goofy black Lab: âYour dog is cute.â

It seemed as if a guardian angel had appeared among us, charged with the task of giving us hope at a time when many of us have never felt so lousy.

For me, a reminder that my big gay family matters right now was more than a pleasantry. It was like a message from heaven. For the last four years the message from Donald Trump has been the opposite: To him, we donât matter at all. In so many ways, heâs made it clear he feels weâd be better off erased.

The messaging began the first week of his administration, when mention of L.G.B.T.Q. rights disappeared from the White House website.

This was just for starters. Later, he rejected plans to add questions about gender identity and sexual orientation to the 2020 census. He banned trans people from the military. On the anniversary of the Pulse nightclub shooting, he announced that his administration would roll back Obama-era health care protections for trans people. He prohibited embassies from flying the rainbow flag on flagpoles. For three out of four Junes he has failed to mention Pride Month â although one time he did take time out of his busy schedule to talk up National Homeownership Month.

His Department of Justice filed a brief with the Supreme Court endorsing the idea that employers had the right to fire L.G.B.T.Q. people just for being themselves. In the end, even the conservative-majority Supreme Court ruled against him. But the idea that the president of the United States went out of his way to put me, and people like me, at risk, is harrowing.

This August, at its convention, the Trump Republican Party re-endorsed its 2016 platform. You know, the one that sanctifies âtraditional marriageâ and condemns the Supreme Court ruling in favor of marriage equality. Quoting Justice Antonin Scalia, a dissenter to that ruling, it describes a marriage like mine as a âsilly extravagance.â

Last week the administration filed a brief with the Indiana Supreme Court making the case that a Catholic school can fire a gay teacher who marries. Itâs a First Amendment case, the administration says. Because persecuting L.G.B.T.Q. people is a form of free expression, I guess. Like cake frosting.

Also in the last week, the president released a shortlist of potential Supreme Court nominees for his second term, a list rife with anti-L.G.B.T.Q. and anti-civil rights individuals. The legal director of Lambda Legal, an organization that fights for the legal rights of L.G.B.T.Q. people, described the nominees as âterrifying.â One of them, Allison Jones Rushing, has ties to a group called the Alliance Defending Freedom, which has espoused the idea that homosexuality should be criminalized. The Southern Poverty Law Center calls it a hate group.

So itâs been that kind of summer. Pandemic. Apocalyptic wildfires in the West. Economic collapse. National convulsion over systemic racism. And almost every week, another message from the most powerful man in the world that my family â which includes a same-sex couple and a young transgender woman â is âless than.â Less than what? Less than equal.

Would you be shocked to learn, then, that the president bills himself as the most pro-L.G.B.T.Q. chief executive in history? An August video by Richard Grenell â a gay man who has served as ambassador to Germany, and (briefly) as acting director of national intelligence â says that âPresident Trump has done more to advance the rights of gays and lesbians in three years than Joe Biden did in 40-plus years in Washington.â

When I watched this video, all I could think of was the line from the old Sylvia cartoon: âThat woman must be on drugs.â

Itâs not that I donât applaud the appointment of an openly gay person to a cabinet-level position; thatâs a sure sign of progress. But the idea that this outweighs the relentless assault on L.G.B.T.Q. families is absurd. The Log Cabin Republicans, whose members are L.G.B.T.Q., defend the president by saying that tax cuts he promoted âhave benefited L.G.B.T.Q. families and helped put food on their tables.â Theyâre also enthusiastic about âopportunity zonesâ â areas where investors face a lower tax rate â and the âhard line on foreign policy.â

Listen, Log Cabin Republicans, Iâm glad youâre happy about tax cuts. But somehow the prospect of my marriage being considered a âsilly extravaganceâ and giving an employer the right to fire me because of who I am does â I admit it â reduce my glee somewhat.

Maybe some people think that L.G.B.T.Q. equality is a done deal. Maybe there are straight, white, suburban moms and dads who think their queer children are safe, now that the culture wars that once threatened their sons and daughters are a thing of the past.

The good news is that L.G.B.T.Q. people can make a difference in the next election, if we show up. Thatâs a big âif,â though; an estimated one- fifth of queer adults are not registered to vote. As Sarah Kate Ellis, the president of Glaad, told me in a recent interview, âItâs imperative that we bring our voices from the street to the polls.â The struggle for families like mine is far from over. But if we sit out this fight, it most definitely can still be lost.

Last week, I came outside one morning to feel the first cold wind of autumn blowing over the lake. On the maples, leaves had begun to turn red. Winter is coming.

I looked into the garden. The rock with the rainbow had vanished, just as swiftly as it had come. 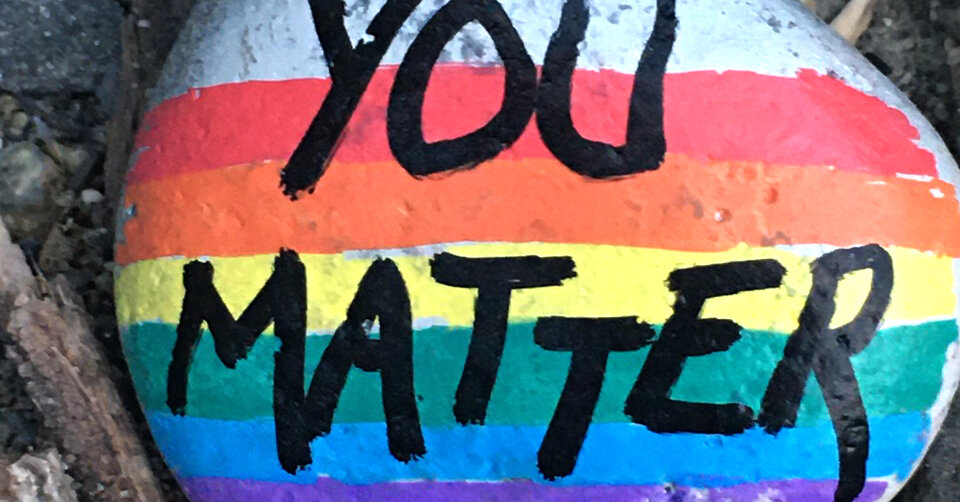