Having covered Arab-Israel diplomacy for more than 40 years, I have to say that the normalization agreements signed Tuesday between Israel and the United Arab Emirates and Israel and Bahrain came about in a most unusual â but incredibly revealing â fashion.

I can best explain it with a soap opera analogy: It is as if Jared Kushner was a lawyer who set out to arrange a divorce between a couple, âMrs. Israelâ and âMr. Palestine.â In the process, though, Mr. Kushner discovered that Mrs. Israel and Mr. Palestine were so incompatible that they couldnât even sit in a room together, let alone agree on his plan for separation.

But along the way, Mr. Kushner discovered something intriguing: Mrs. Israel was having an affair with Mr. Emirates, who was fleeing an abusive relationship with Ms. Iran.

So, Mr. Kushner stopped trying to arrange a divorce between Mr. Palestine and Mrs. Israel and seized instead on the mutual interest of Mrs. Israel and Mr. Emirates to marry â not to mention the self-interest of President Trump to serve as the âjustice of the peaceâ who would officiate on the White House lawn in the midst of a presidential campaign.

The fact that the normalization of Israel-Emirates and Israel-Bahrain relations was actually set in motion because of the failure, thus far, of the Trump administrationâs Israeli-Palestinian diplomacy does not diminish its significance, even if it adds a dollop of irony to our story.

My rule: In the Middle East, you get big change when the big players do the right things for the wrong reasons.

And this is the right thing. Egypt and Jordan each made peace with Israel to end their state of war, but trade, tourism and mutual investments have been limited. Israel and the Emirates and Israel and Bahrain are normalizing their relations because they want trade, tourism and investment, and also intelligence-sharing against Iran. And Saudi Arabia has clearly blessed it all by allowing Israelâs El Al airlines to fly through Saudi airspace back and forth to Bahrain and the U.A.E.

You donât see that every day. In my view, anything that makes the Middle East more like the European Union and less like the Syrian civil war is a good thing. A friend from Dubai tells me some people are already jokingly greeting each other with âShalom alaikumâ â a combination of the Hebrew and Arabic phrases for âhello.â

Have no illusions: I pray each night that Trump is defeated in November, but if he and Kushner helped to nurture this deal on their way out the door, good for them. They are guilty of a thousand sins â but this deal isnât one of them.

I canât predict how it will all play out, but when the most technologically advanced and globalized Arab state, the U.A.E., decides to collaborate with the most technologically advanced and globalized non-Arab state in the region, Israel, I suspect new energies will get unlocked and new partnerships forged that should be good for both Arab-Israeli and Jewish-Muslim human-to-human relations.

If successful, it will create an alternative model for emulation to the Iranian permanent resistance model, which has only helped spawn failed states in Lebanon, Syria, Gaza, Iraq and Iran.

First, because America is sharply reducing its military presence in the Middle East, and, as a result, new alliances are being forged to fill the vacuum. There is the Iran-Hezbollah Shiite axis in Lebanon, Syria, parts of Iraq and Yemen. There is a Turkish-Qatar alliance. And, countering both is this new tacit Israel-U.A.E.-Bahrain-Saudi axis, alongside a budding Iraqi, Egyptian, Jordanian, moderate Sunni axis.

The second trend is that ever since the Arab spring, the collapse of oil prices and the surge in Arab youth populations, moderate Sunni Arab states understand that they can no longer retain their legitimacy by outbidding one another on the Palestine question and offering government jobs and subsidies.

Their future stability depends on their providing their youth the educational tools, the trade relationships, the global connectivity â and the religious, gender and educational pluralism â they need to thrive. While they refuse to include political pluralism or dissent in that mix, in time theyâll have to. For now, though, their modernization model is China, not America.

There were also critical tactical considerations for the Emirates, argues David Makovsky, an expert on Arab-Israeli relations at the Washington Institute for Near East Policy. âOn one hand,â he told me, âthe U.A.E. felt its leverage with the Trump administration would never be higher than now â when Trump faces an uphill re-election effort and is looking for a Mideast diplomatic breakthrough. As such, if there was ever a time the U.S. would sell the U.A.E. advanced F-35 stealth jets, after refusing for eight years, itâs now.â

Making peace with Israel, Makovsky added, was also good âpolitical risk insuranceâ for the U.A.E. should Joe Biden win the presidency, as âit could offset strains with congressional Democrats over the U.A.E.âs hostility to Obamaâs Iran nuclear deal and its involvement in Yemen.â

But maybe the most important unintended consequence of Kushnerâs peace endeavor was how it exposed the fact that todayâs Israeli government is completely incapable of accepting any kind of two-state solution with the Palestinians.

How so? Kushnerâs plan abandoned traditional U.S. neutrality and put forth a two-state map that was designed to satisfy every security â and political â need of Israelâs right-wing prime minister, Bibi Netanyahu, and his base of West Bank Jewish settlers.

Bibi and his ambassador in Washington, Ron Dermer, helped to craft Kushnerâs plan. And what happened?

Kushner proposed that Israel could annex about 30 percent of the West Bank, where most of the Jewish settlements are, but that the Palestinians would be able to set up a state on the other 70 percent â albeit a collection of loosely connected pieces â with a capital on the edge of Jerusalem.

But hard-line settlers in Bibiâs coalition insisted on retaining sovereignty on the whole West Bank, which they believe was given by God to the Jews. They would not sign off on even 70 percent for a Palestinian state surrounded by an Israeli army.

So, Bibi tried to annex his 30 percent â without agreeing to the 70 percent for a Palestinian state. But Trump and Kushner, to their credit, blocked that. The U.A.E. then stepped in and said that if Bibi would abandon his annexation plan, the Emirates would normalize relations.

Bibi jumped on it. It enabled him to blunt some of the criticism from his extremist settler base for abandoning annexation and from the Israeli left for stalling the peace process with Palestinians. And the U.A.E. got Palestinians a freeze on annexation to cover its normalization with Israel. Thatâs how the two deals got connected.

But what have we learned? Bibiâs favorite line with U.S. presidents over the years was âtest me,â implying that heâd show political courage for the right two-state plan. Well, Trump tested him â and he flunked. Bibi never prepared his base to accept even the most benign, neutered form of a Palestinian state.

(Had the Palestinians had any sense of humor, instead of rejecting Kushnerâs plan theyâd have accepted it without reservation and totally exposed Bibi. But the Palestinians are lost in space, incapable of nuptials or divorce.)

So, where does this all leave the Israeli-Palestinian issue? I suspect that the international phase of their peace process is over. What U.S. president or European envoy is going to get involved with Bibi if Bibi canât accept Bibiâs own plan?

Therefore, the Palestinian issue will most likely become more and more an internal Israeli issue â one that Israel will own alone. The 2.5 million Palestinians in the West Bank, faced with the prospect of Israeli control with no alternative in sight, will eventually demand equal rights and Israeli citizenship. And that will pose a direct threat to Israelâs Jewish and democratic character in a way no Arab army ever has. Bibiâs true legacy.

Which is why, on the Israeli-Palestinian side of the ledger, the Trump-Kushner peace plan may be the most consequential peace plan ever put on the table â not for what it achieved between Israelis and Palestinians, but for what it revealed. 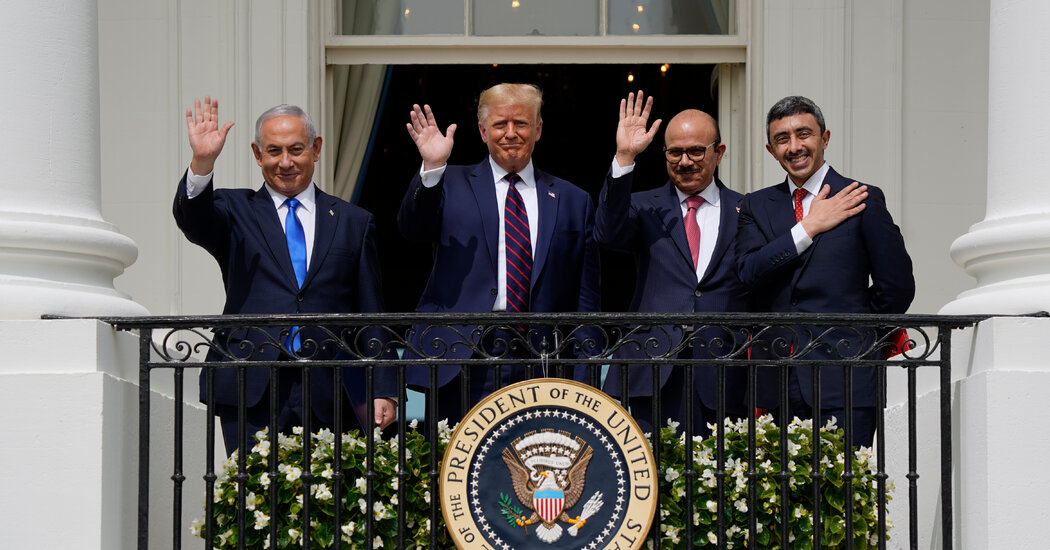