Among the few remaining advantages that Americans can claim over other countries is the relative cleanliness of our air. Air pollution is a leading risk factor for early death; it is linked to an estimated four million premature fatalities around the world annually. But over the last 50 years, since Congress passed environmental legislation in 1970, air quality in the United States has steadily improved. Today, America’s air is significantly cleaner than in much of the rest of the world, including in many of our wealthy, industrialized peers.

Well, not literally today, considering I needed an N95 mask to walk to the mailbox this morning. Over the last few years, for weeks and sometimes months in late summer and fall, my home state, California, and other parts of the American West erupt in hellish blaze, and plumes of smoke turn the heavens visibly toxic.

In some of the country’s most populous cities in the last few weeks, the concentration of dangerous particulates in the air shot up to levels worse than the averages in the most polluted cities in China, India and Pakistan. Ash generated by some of the largest wildfires in California’s and Oregon’s history fell across the region like snow. The sky burned Martian orange — a hue so alien that smartphones struggled to faithfully photograph it.

I have been searching for some glint of optimism during an otherwise bleak time. While choking through a walk this past weekend (I had to leave the house), I came up with this: Maybe such disasters will finally force us to recognize the steep costs of incompetent, neglectful, uncaring government.

Like America’s failed response to the coronavirus, the wildfires and poisonous air are best seen as a product of negligence at all levels of society, from individuals to cities and states to a federal government that, in recent decades, exited the business of getting anything done. These were natural disasters exacerbated by human weaknesses: a reluctance to plan, a preference for denial over prevention, for consumption and convenience over caution, and for quick fixes over lasting change.

Now, the singed chickens are coming home to roost. Militarily and economically, the United States remains an indomitable superpower. But in just about every other way, we have been exposed as a fragile nation, whose overlapping vulnerabilities can be attributed to a political system that has ceased caring about the most basic of citizens’ needs — even that of fresh air.

Donald Trump did not cause these fires; no lawmaker did. But as I watched the president’s brief photo op this week — he popped into town near Sacramento on Monday for about two hours, a layover between campaign events in Nevada and Arizona — it struck me that he is the embodiment of a political and cultural rot that will remain long after he’s left the scene.

In Sacramento, all of Trump’s familiar tics were on display. There was magical thinking: “It’ll start getting cooler, you just watch,” he told a state official who implored him to recognize that climate change is contributing to worsening wildfire seasons. There was the absence of empathy, with just a perfunctory mention of the people who’ve lost homes and businesses. And there was ego-driven denial. When the official pointed out that scientific consensus disagreed with Trump, the president all but pouted and stuck his fingers in his ears. “I don’t think science knows, actually,” he said.

Science does know, actually. Trump has argued that California’s fires could be addressed by better forest management. “You gotta clean your floors, you gotta clean your forests,” he said last month. He’s not totally wrong. Experts do say that improved management would mitigate fires (though they prescribe managed burns rather than whatever “cleaning floors” might mean).

But that is far from the whole story. A barrage of scientific evidence shows that climate change has intensified droughts and hotter, drier weather across the Western United States, which has made brush, trees and other organic matter more combustible. According to one study, between 1984 and 2015, climate change contributed to the near-doubling of the geographical area vulnerable to wildfires in the West. To put it in a way that might register with the president: We now have twice as much floor to clean.

If you live in the West, the connection between climate change and fire is unavoidable. A month ago, we suffered a record-breaking heat wave that baked the earth into kindling. Then the match was struck. The Bay Area woke up to a sky flashing blue with dry lightning — lightning unaccompanied by rain. Nearly 9,000 strikes hit the ground, sparking fires across the region.

Can the climate-denying right really continue to ignore this basic cause-and-effect? Trump’s brand of denial is hardly unique. In some ways, it is embedded in our political system. Trump has ignored climate change because it’s been politically easy to do so. The effects of climate change are imprecise, and in the case of the wildfires, they’re almost not his problem, as the Electoral College allows him to write off the West Coast entirely. (Trump often tweets as if “blue states” are not even part of the country.)

The political challenges will remain even if Joe Biden wins the White House and Democrats gain control of Congress. Environmental legislation is difficult: It imposes identifiable short-term costs and inconveniences on people and businesses in return for long-term benefits for society as a whole.

It may seem that passing rules to protect the earth would require unusual political courage. But we have tackled these problems before. The late 1960s and early 1970s were no model of political comity in the United States; that era, like ours, was a time of intense polarization, with a citizenry restive for change.

But according to a fascinating history of the Clean Air Act by Brigham Daniels, Andrew P. Follett and Joshua Davis that was published recently in the Hastings Law Journal, Richard Nixon and Democrats in Congress passed the law precisely because Americans had become so cynical about their government. Lawmakers saw fixing the environment as a difficult goal they could nevertheless achieve: “Vietnam, civil rights, and Soviet tension may all have been out of reach, but cleaning the air seemed to be attainable, and gains could be measured and seen,” the authors write.

The same logic holds today. Dirty air and fire surround us, but we still have the collective capacity to mitigate them. Breathing is important. Let’s get to it.

Farhad wants to chat with readers on the phone. If you’re interested in talking to a New York Times columnist about anything that’s on your mind, please fill out this form. Farhad will select a few readers to call.

News – Opinion | Clean Air Was Once an Achievable Political Goal 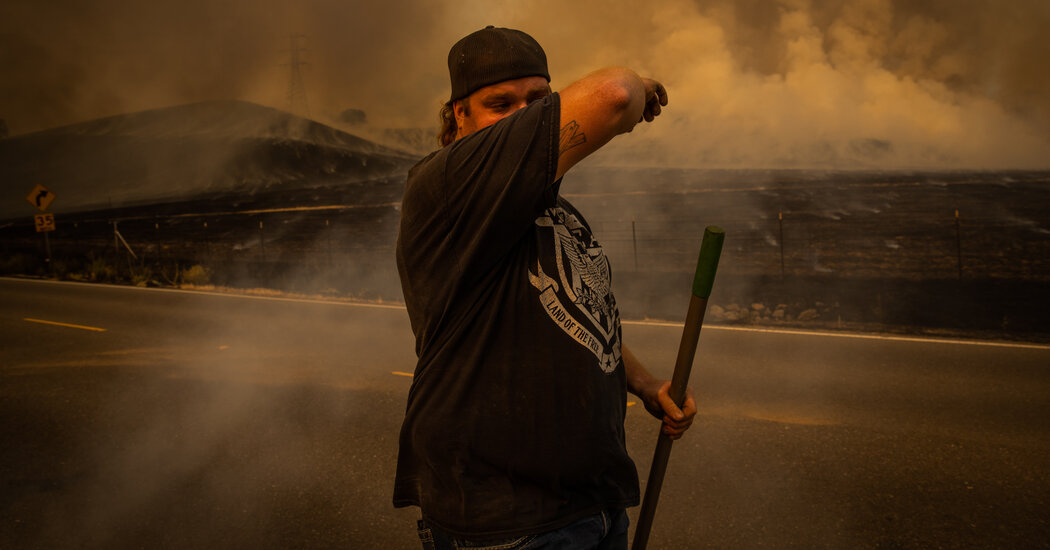