It isn’t hard to guess what you’re hearing from most of your fellow Republicans as they try to persuade you to cast a vote for President Trump’s Supreme Court nominee before the election. In a nutshell, it’s this: “The Democrats didn’t play by the rules in the past, and you’d be a fool to think they will play by them in the future. So why should we not fill a seat that’s constitutionally ours to have?”

In short, whatever sin is involved in moving forward on Trump’s next nominee this close to a presidential election, it’s a venial one compared with what the other side has done, and may still do.

Nor, I imagine, is that everything your caucus colleagues are telling you. The left, they say, is engaged in a full-scale attack on traditional American values, from freedom of speech to the presumption of innocence to the right to bear arms to the need to enforce our immigration laws to the broader concept of law and order. These things are too important to hazard on a bare 5-4 conservative majority on the Supreme Court, especially now that John Roberts has succumbed to the lure of being the swing vote. A 6-3 majority might be the only sure defense against this cultural revolution for a generation to come.

So I get the analysis. And I agree that Democrats have a lot to answer for, the Kavanaugh circus in particular.

One answer you might hear to this is that it’s no sin for a president to exercise his constitutional right to nominate a judge at any point in his tenure or for the Senate to vote on the nomination. Ruth Bader Ginsburg’s confirmation process, after all, took a grand total of some 50 days.

Yet it was Republicans who unilaterally changed the norms in 2016 to block Merrick Garland’s nomination to fill Antonin Scalia’s seat. And people like Lindsey Graham promised they would live by the new norms, even if it was politically inconvenient. It’s a promise Graham is reneging on, but has a moral obligation to honor.

I realize your decision may seem more difficult if Trump nominates a judge whose philosophy and character you admire. No doubt you’d like to see such a judge on the court. But refusing to cast a vote until next year merely delays her elevation by a few months — assuming, that is, that Trump wins and Republicans retain their Senate majority.

This, however, raises a philosophical consideration. If a central conservative complaint about the federal judiciary is that it has arrogated too many powers that ought to be in the hands of the people, how can conservatives justify entrenching their power in the courts in the expectation that they’re unlikely to win at the polls? The Garland rule (or, if you prefer, the Biden rule) may have had no basis in the Constitution, but at least it was consonant with the populist drift in conservative thinking.

Now you have a Republican Party that seeks to advance its notions of judicial modesty and democratic accountability by the most immodest means imaginable, all in order to lock in conservative control over the least democratic branch of government. Wouldn’t the better Republican way be to try to win more elections with better candidates?

I respect the fact that you’re a pragmatic politician who values the views of your colleagues and constituents — most of whom, I suspect, would likely favor rapid confirmation of the nominee. But as you so eloquently put it in February, when you cast the lone G.O.P. vote to convict President Trump in his impeachment trial, “freedom itself is dependent on the strength and vitality of our national character.” A Republican Party that lies and bamboozles voters contributes nothing to improving that character.

Senator, it may not have been your destiny to be president. But it’s still yours to show Americans what it means to be courageous by way of sound and independent judgment. Your decision alone won’t make all the difference; three Republican senators would need to join you. But — with your colleagues Susan Collins and Lisa Murkowski — it will show the way. 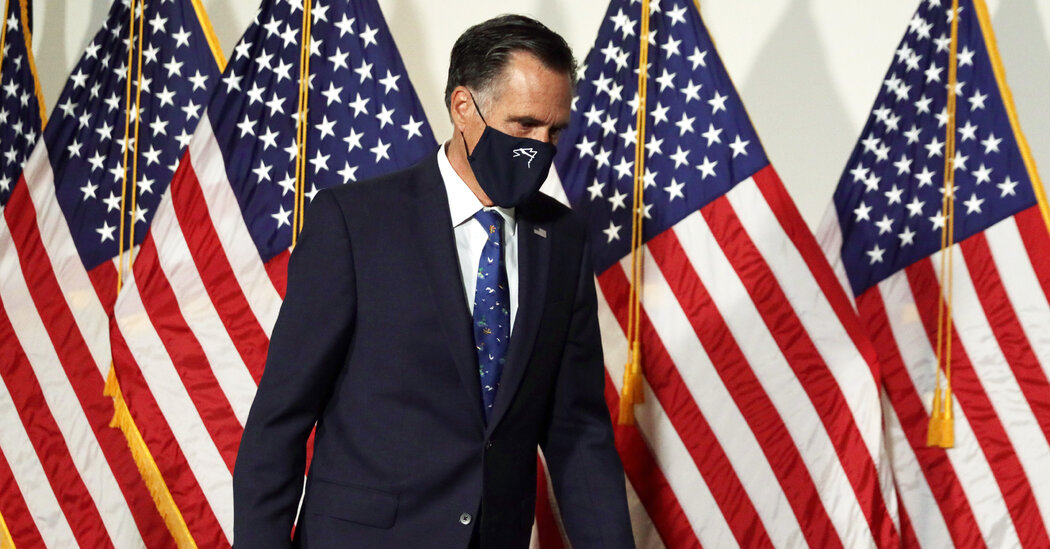