Mohammad Reza Shajarian’s politics were almost never explicit, but the Iranian people knew he stood with them.

Ms. Siamdoust is the author of “Soundtrack of the Revolution: The Politics of Music in Iran.”

Within minutes of the death of the Iranian vocalist Mohammad Reza Shajarian last week, thousands streamed into the streets surrounding his hospital in Tehran, openly wept and sang his songs in unison.

A man climbed on an ambulance and yelled to applause: “It is the right of the Iranian people to give him a majestic funeral. He belongs to all the people.” Another person called out for three days of mourning, a suggestion that drew cheers from the crowd.

A state funeral would have befit Iran’s most beloved public figure, who died at age 80 after a six-decade career. Mr. Shajarian’s music and message, drawn from the humanist canon of Persian poetry, unified people of all generations and political persuasions. But Iranian authorities kept his procession small by fencing off thousands of people paying their last respects in the ancient city of Tus, where he was buried next to the tomb of Ferdowsi, the revered Persian poet and author of the national epic “The Book of Kings.”

Mr. Shajarian’s politics were almost never explicit, and he long insisted that he was not political. His work, he argued, was simply “mardomi,” a term that means “of the people.” But for several years before Iran’s 1979 revolution and in the decades since, he created some of the country’s most political songs — calling on people to join the revolution in 1979, criticizing it in 1985 with his album “Injustice,” and commenting on the hypocrisy of clerics in his 2002 album “Without You.”

His most famous ballad, “Bird of Dawn,” based on an old Persian poem, became a protest song. At his concerts, whether in Tehran or in London, Paris or New York, people implored him to sing it. With his right hand on his heart he always obliged. As he sang in his familiar plaintive tenor, Mr. Shajarian embodied the pained bird, dramatizing in music and verse the struggle of a people:

Bird of dawn, start your lament, relight my anguishBreak this cage with your scintillating sighs and turn it upside downWing-tied nightingale, emerge from the cage cornerAnd sing the song of human freedom

The poem on which the song is based dates to the 1920s, when Iranians’ hopes for representative government were crushed with Reza Pahlavi’s authoritarian takeover. Repression ensued, and the poem became a call to freedom. When Mr. Shajarian sang his lyrical version of that poem, fused in his voice were not only thousands of years of civilization and a storied musical and poetic tradition, but a century-long arc of a modern political struggle for freedom.

When I pressed him on the political nature of his music in a 2011 interview, Mr. Shajarian was cryptic: He said he had always tried to “walk the right path.”

“When you’re moving with the people, your position is clear,” he said. “The people know what they want.”

That he so often drew from the mystical tradition of Persian poetry for his lyrics was not an accident; it allowed him to offer subversive political commentary while maintaining an air of deniability. The poetry of the likes of Rumi, Khayyam and Hafez is so nearly universally revered that even arch-conseratives can’t fault it. And in an Islamic Republic where political subversion can land artists and writers in jail, Mr. Shajarian’s unparalleled virtuosity as a vocalist and his virtuousness of character long made him untouchable.

For more than 40 years, Mr. Shajarian channeled the hopes and frustrations of Iranians and became the “people’s voice.” He delved into the country’s rich poetic heritage and sang verses that directly addressed people’s political and social problems. This turned his concerts into one of the few public places where crowds of strangers could get together and openly express their discontent through music.

For all his coyness, Mr. Shajarian understood this well and enjoyed nothing more than singing to his own people in his own land. He once told me, “In Iran, it’s like you’re reminiscing and sharing secrets with people you’ve suffered with.” Iranians, he said, “know what the words mean. Everything you say carries so much weight.”

But even Mr. Shajarian couldn’t stay untouchable forever. In 2009, when opposition demonstrators flooded the streets after Iran’s disputed presidential election, Mr. Shajarian spoke out against state violence on protesters and sang “Put Your Gun Down,” with lyrics drawn from a poem: “Come, sit, talk, listen/ Maybe the light of humanity will open a path in your heart.”

As a punishment, he was forbidden from ever performing in Iran again and his work — including his iftar prayer, “Rabbana,” which people had listened to on radio and television as they broke their fast on Ramadan nights for 30 years — was banned on national media. People resorted to streaming it from their phones.

“They think they are doing me harm, but they’re only harming themselves,” he said, referring to the government officials who instituted the ban. “They don’t even have enough social awareness to understand that you can’t take away from people something that they have connected with spiritually.”

Since his death, people have huddled together in groups throughout Iran to sing “Bird of Dawn” in what has become a new sort of national anthem. Crushed by government corruption, extreme U.S. sanctions and the pandemic, which has already resulted in nearly 30,000 deaths in the country, Iranians are at a particularly precarious moment. In commemorating Mr. Shajarian, they are also hanging onto the humanist messages of his songs, and the possibility — however remote — of a brighter day.

Nahid Siamdoust, a visiting assistant professor of women’s studies and anthropology of religion at the Harvard Divinity School, is the author of “Soundtrack of the Revolution: The Politics of Music in Iran.”

News – Opinion | A Musician Revered by Iranians, But Banned by the State 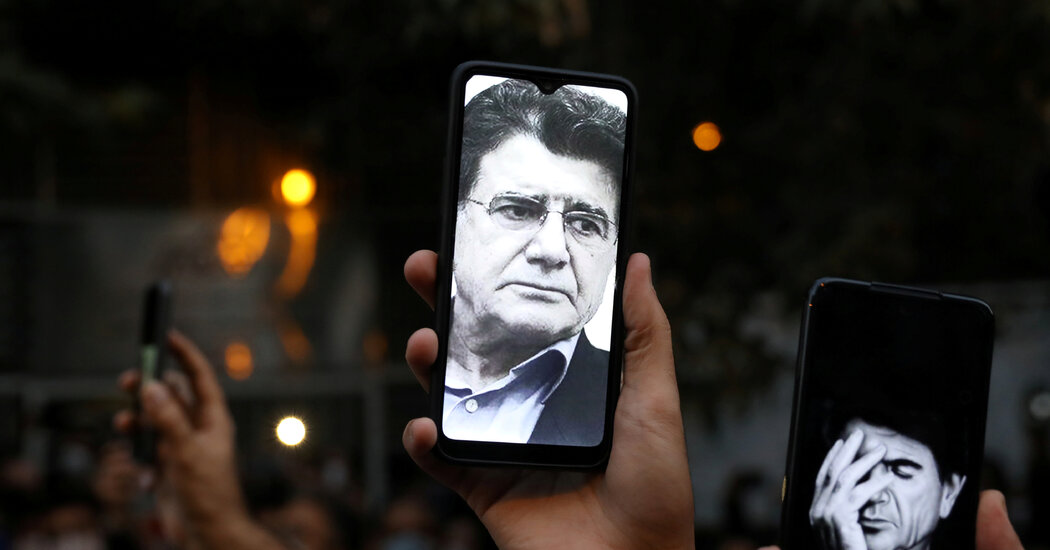