Early on Monday morning, Tiyanna Jackson, who had quit her job in the spring to care for her 4-year-old daughter, Zuri, was flooded with relief as she arrived at a pre-K center in the South Bronx. Finally, she said, with Zuri starting school, she could get back to work.

In East New York, Brooklyn, Balayet Hossain’s day began with disappointment after he brought his two daughters to school, only to find that the children, a kindergartner and first grader, could not return to their classrooms until next week.

And in Corona, a Queens neighborhood that was hit particularly hard by the coronavirus in the spring, Baryalay Khan said dropping off his daughter, Fathma, at pre-K made him feel that the city was finally recovering.

The mix of joy, confusion and hope was felt throughout New York City on Monday, on a first day of school unlike any other for the nation’s largest school district.

The vast majority of the city’s 1.1 million students started the school year on Monday online and will have the option of returning to classrooms over the next few weeks.

But up to 90,000 children in pre-K as well as students with advanced disabilities streamed into about 700 school buildings on Monday morning for the start of in-person classes. The city’s roughly 1,400 school buildings have sat largely empty for six months, after the city abruptly closed classrooms in mid-March to help slow the spread of the coronavirus.

Though Monday’s reopening falls far short of what Mayor Bill de Blasio originally promised — all students having the option to return to classrooms — it still marks a significant milestone in New York City’s long path to fully reopening. It is one of the few cities in the country where some children are now back in classrooms.

U.S. Attorney General William P. Barr on Monday identified three Democratic-led cities, including New York, that he said could lose federal funding over their responses to the protests against police brutality and systemic racism.

President Trump has cast Democrats as unable to protect citizens and maintain public safety, often resorting to great exaggeration or misleading characterizations of Democratic positions. In a memo earlier this month, he threatened to withdraw billions of dollars from some of the country’s largest cities.

The memo gave Mr. Barr 14 days to identify “anarchist jurisdictions,” citing the cities of New York, Seattle and Portland as some that had permitted “anarchy.”

Gov. Andrew M. Cuomo addressed Mr. Trump’s funding threat at a news conference on Monday, saying: “So, is it going to happen? No, because it’s illegal and it’s unconstitutional. But it’s politics; it’s politics for the next few weeks going up to the November election.”

The Puerto Rican rapper Bad Bunny performed a concert on the back of a truck rolling through the Bronx, Washington Heights and Harlem. [Gothamist]

A survey by the NYC Hospitality Alliance of 450 restaurants, bars and nightlife venues found that 87 percent could not pay their full rent last month. [CBS New York]

For more than 20 years, Metronome, which includes a 62-foot-wide, 15-digit electronic clock that faces Union Square in Manhattan, has been one of the city’s most prominent and baffling public art projects.

Its digital display once told the time in its own way, counting the hours, minutes and seconds (and fractions thereof) to and from midnight.

Over the weekend, Metronome adopted a new, ecologically sensitive mission. Now, instead of measuring 24-hour cycles, it is measuring what two artists, Gan Golan and Andrew Boyd, present as a critical window for action to prevent the effects of global warming from becoming irreversible.

On Saturday at 3:20 p.m., messages including “The Earth has a deadline” began to appear on the display. Then numbers — 7:103:15:40:07 — showed up, representing the years, days, hours, minutes and seconds until that deadline.

The Climate Clock, as the two artists call their project, will be displayed on the 14th Street building, One Union Square South, through Sunday, the end of Climate Week. The creators say their aim is to arrange for the clock to be permanently displayed, there or elsewhere.

It was on Putnam Avenue in Brooklyn between Ralph and Patchen, sometime in 1946 or ’47. Word went around the neighborhood one day that you could buy a pet snail for a penny.

All you had to do was provide your own can of water, give your penny to the storekeeper and “plop,” the snail was yours.

All day long, kids were walking around carrying tin cans with snails climbing up the sides trying to escape. When they got to the top of the can, they would be dunked back down again.

When it was time to go home, the snails were all dead. The pet snail craze had started, peaked and evaporated, all before dinner.

News – N.Y.C. Schools Reopen for a First Day Unlike Any Other 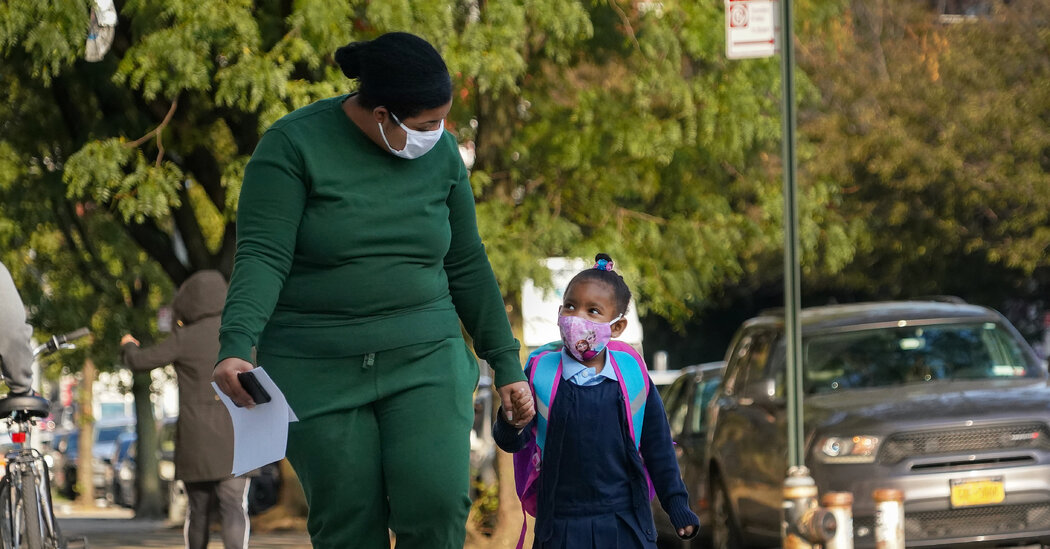