At a companywide meeting, Facebook’s CEO also said President Donald Trump brought up China during an October dinner at the White House.

Facebook CEO Mark Zuckerberg took a swing at Apple on Thursday, calling the iPhone maker’s app store monopolistic and harmful to customers during a companywide meeting.

“[Apple has] this unique stranglehold as a gatekeeper on what gets on phones,” Zuckerberg said to more than 50,000 employees via webcast. He added that the Cupertino, California–based company’s app store “blocks innovation, blocks competition” and “allows Apple to charge monopoly rents.”

While the Facebook CEO was specifically answering a question about Apple blocking gaming-related apps, his comments came at a time where authorities are scrutinizing both Silicon Valley giants for antitrust behavior. Last month both Zuckerberg and Apple CEO Tim Cook, as well as the heads of Amazon and Google, testified in a House of Representatives hearing examining potentially monopolistic practices at the United States’ largest technology firms.

Zuckerberg’s comments were another signal that there’s no love lost in the long-contentious relationship between the leader of the social network and the $2 trillion electronic device maker.

“That’s innovation that could really improve people’s lives,” Zuckerberg said on Thursday. “And Apple’s just balking at it.”

On Thursday, Apple refused to allow Facebook to notify people that the iPhone maker would collect 30% of in-app purchases made through a new feature on the Facebook app that lets businesses sell tickets to online events on the platform. After Apple told Facebook that a notification was “irrelevant information,” the social network was forced to scrub the message out of its app before Apple let the feature through.

Zuckerberg also criticized a change in Apple’s upcoming iOS 14 operating system for iPhones and iPads that would make it much harder for companies like Facebook to target people using those devices with ads. Zuckerberg estimated that Facebook’s ad targeting on iPhones and iPads would lose about 50% of its effectiveness once iOS 14 was released and suggested that if Facebook could distribute its apps outside the App Store, it could avoid that kind of scenario.

Apple, which this month became the first US company to be valued at $2 trillion, is under global scrutiny for the way it runs the App Store, the only way to buy and download apps on iPhones and iPads. In the last few months, app developers criticized the company for taking a 30% commission on every in-app purchase, and not allowing iPhone and iPad users to download apps from outside the App Store on their devices.

Earlier this month, Apple kicked the popular video game Fortnite off the App Store after Epic, the game’s creator, added a feature that let players buy virtual currency with their own credit cards, bypassing Apple’s 30% cut.

In response, Epic filed a lawsuit against the company, and Apple threatened to revoke the company’s developer accounts. This move had implications beyond Fortnite, jeopardizing all software that used the Unreal Engine, an Epic-owned platform used by other developers to make video games.

In his address to employees, Zuckerberg said Apple’s decision to block the Unreal Engine was “just an extremely aggressive move” that was “quite problematic.”

Zuckerberg also addressed a recent story in the Wall Street Journal, which reported that he had raised concerns about Chinese internet companies threatening American businesses in a private dinner with President Donald Trump at the White House in October.

Shortly after, the US government launched a national security review into Bytedance-owned TikTok, the most popular Chinese app used in the United States, and one of Facebook’s largest competitors. Last month, Trump declared TikTok a “national emergency” and signed an executive order that threatened to ban the app unless it was sold to an American company. On Monday, TikTok sued the Trump administration.

“Trump certainly brought up China or some of the actions that he was taking, but I don’t think TikTok or any of this stuff specifically came up there,” Zuckerberg told his employees on Thursday.

At an all-hands meeting earlier this month, Zuckerberg conceded that there were “valid” national security questions around TikTok, but maintained that banning it would set a “really bad long-term precedent,” and that “it needs to be handled with the utmost care and gravity whatever the solution is.” He repeated those views in his talk on Thursday.

Ryan Mac is a senior tech reporter for BuzzFeed News and is based in San Francisco.

News – Mark Zuckerberg Said Apple Has A “Stranglehold” On Your iPhone 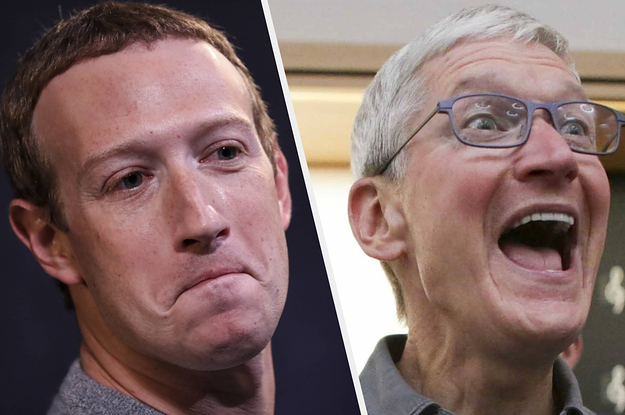