The row over a possible Tier 3 lockdown in Manchester is continuing , with Mayor Andy Burnham blaming Chancellor Rishi Sunak for being “the problem” amid confusion over talks with Downing Street.

Mr Burnham and Conservative politicians in Greater Manchester oppose Tier 3 measures being imposed, with the mayor calling for a return to the original furlough scheme that saw the Treasury pay 80 per cent of workers wages. Mr Sunak has only offered a 66 per cent subsidy.

It comes as it emerged that people who have been told to self-isolate through NHS Test and Trace could have their contact details shared with police on a “case by case” basis.

Meanwhile, former prime minister Tony Blair has denied claims that he breached coronavirus quarantine restrictions by failing to self-isolate for 14 days upon returning to the UK from a trip to the US.

Existing economic support packages will not be enough to stave off mass redundancies and business failures during the coronavirus crisis, bosses have warned Boris Johnson.

The British Chambers of Commerce told the Prime Minister that any new lockdown restrictions must come with “truly commensurate” financial support or risk “catastrophic economic consequences”.

In a letter to Mr Johnson on Saturday, they raised particular concern about the Tier 2 restrictions imposed on London and other areas on Saturday because they “dramatically” hamper businesses without extra support.

The Government said all restrictions “are guided by the science” in order to bring down transmission rates and stressed that it had introduced a £200 billion support package.

In the letter, the chambers said the Job Support Scheme, which sees the Treasury pay two-thirds of workers’ wages in businesses told to shut in Tier 3, will “assist some firms”.

But they added that firms they represent say it “will not be enough to stave off mass redundancies and business failures” as they called for “enhanced support”.

Tony Blair has denied claims he breached coronavirus restrictions by failing to self-isolate for 14 days after a two-day trip to the US.

The former prime minister was photographed leaving a Mayfair restaurant 10 days after his return from Washington DC via private jet last month, The Sunday Telegraph reported.

Sources told the newspaper that Mr Blair, 67, had requested special exemption from the two-week travel quarantine rules but Whitehall did not issue him with the formal dispensation required.

The ex-Labour leader allegedly claimed he was advised to follow rules on attending “international conferences”, having travelled to the US for a ceremony at the White House.

The outsourced Test and Trace system has failed to reach nearly a quarter of a million close contacts of people who have tested positive for coronavirus, according to a new analysis.

Private firms Serco and Sitel failed to contact 245,481 contacts in England either online or from call centres over four months – missing nearly 40 per cent of contacts, the figures show.

Labour said the figures show test and trace is “on the verge of collapse” and highlight the need for a short national lockdown to allow the Government to fix the system.

The Government defended the system, saying test and trace is “breaking chains of transmission” and had told 900,000 people to isolate.

Boris Johnson pledged in May that the system, which has cost £12 billion, would be “world-beating” and a successful tracing programme has long been hailed as a way to ease lockdown measures.

Labour’s analysis of official figures released this week showed more than 26,000 people in the week up to October 7 were not contacted in north-west England, where the Liverpool region and Lancashire have been plunged into the severest restrictions.

The Prime Minister has threatened to impose the Tier 3 measures on neighbouring Greater Manchester, even if local leaders do not consent because they are demanding greater financial support.

The figures showed that the private firms did reach 372,458 contacts in the period of the data, May 28 to October 7.

“Complex” cases – which include outbreaks linked to hospitals, care homes, prisons or schools – are handled by local health protection teams, which statistics show have far higher rates of success.

A Department of Health and Social Care spokesman said: “We’re continuing to drive forward local contact tracing as part of our commitment to being locally led, with more than 100 Local Tracing Partnerships now operating, and more to come.”

He added that, when including local teams, 84 per cent of contacts had been traced “where communication details were provided”.

Strictly Come Dancing fans have shared their joy at the show’s return, but also voiced confusion at the opening routine’s “ironic” backing track.

The 18th series kicked off on BBC One with a dance to Rozalla’s ‘Everybody’s Free’, to the bafflement of some viewers.

Social media users asked whether the “bold” song choice was a joke given the tightening up of coronavirus lockdown restrictions across the UK.

“Strictly starting with ‘Everybody’s Free’ when we are all hiding in our bunkers,” one Twitter user commented.

Thousands of anti-lockdown protesters descended on central London as the latest round of coronavirus restrictions came into force.

Campaigners marched down Hyde Park and Oxford Street calling for an end to strict new curbs as the capital entered Tier 2 of the Government’s Covid alert system.

Led by Piers Corbyn, brother of the former Labour leader, demonstrators chanted “stick your poison vaccine up your a***”, “take off your masks” and “we are the 99 per cent”.

Captain Sir Tom Moore has said he fears elderly people would struggle if another national lockdown is introduced.

The Second World War veteran, who in April captured hearts around the nation by walking 100 laps of his garden raising £33 million for the NHS, said the older generation will start to feel “lonely” should tougher coronavirus restrictions return across the country.

He told LBC another lockdown would be a “disaster”, as elderly people would be left without family members to meet up with.

Sir Tom said: “I am afraid it would be, let’s just say unpleasant, for older people.

“It will be very, very difficult because at the moment they are virtually imprisoned in their own premises.”

He added: “Whilst we continue with the lockdown, people are going to be more and more isolated, for longer and to me, this is going to be very, very bad for old people. ”

However, Sir Tom said it wouldn’t just be elderly people impacted by a second national lockdown, declaring it would be a “very serious situation for all of us”.

Asked for his message to those suffering, the 100-year-old said: “I think the thing is, you’ve got to look on the bright side, that things will get better.

“I mean I’m always, I’ve been very optimistic and I’m still optimistic, but I do worry for the old people.

“The old people have the right to say do look on the bright side because things will get better, and there is no doubt that we can get away from under this cloud that we’re in at the moment. ”

Sir Tom also urged younger people to help out their elderly relatives or neighbours, by communicating with them or by carrying out day-to-day tasks such as shopping.

In Wales, 442 Covid-19 patients were in hospital as of Friday, up from 291 a week earlier, with 32 in ventilation beds, remaining the same figure as a week earlier.

Data on patients with Covid-19 is not comparable across the UK due to differences in the way the figures are reported.

The number of Covid-19 patients admitted to hospital on Thursday – the most recent daily figures available – and the total number of patients in hospital and those on ventilators in each region of England, as of Saturday, are as follows (previous week’s figure in brackets):

A further 86 people who tested positive for coronavirus have died in hospital in England, bringing the total number of confirmed deaths reported in hospitals to 30,910, NHS England said on Saturday.Patients were aged between 44 and 99. All but two patients, aged 62 and 79, had known underlying health conditions.The deaths were between September 16 and October 16.Three other deaths were reported with no positive Covid-19 test result.

The Government needs to demonstrate how coronavirus restrictions are working to win over the “spoonful of scepticism”, a Tory Lancashire MP has said.Jake Berry told the BBC: “I do think the British public would react extremely well to having the data shared with them in a simple and meaningful way.“My preference would be through the NHS Test and Trace app to try and bring the people with us.“Because I think the point that’s made by Greater Manchester is that people are very sceptical about whether this new tiering system will work.“I think that spoonful of scepticism is because we’ve been in very similar measures since August and no one has really demonstrated to us the way out or how these measures are working.”

Downing Street is being urged to restart talks with Greater Manchester’s political leaders over the highest levels of coronavirus restrictions, amid warnings of rising deaths.

Boris Johnson was also under renewed pressure on Saturday to impose a short national lockdown known as a circuit-breaker to slow Covid-19’s resurgence.

The calls came as new controls including in Lancashire and London mean 28 million people – more than half of England – are living under heightened restrictions.

Both the Prime Minister and Labour have warned the situation in Greater Manchester is “grave”, while the region’s political leaders refuse to accept Tier 3 restrictions without greater financial support for businesses and residents.

But No 10 was understood to have not yet scheduled further talks for the weekend and mayor Andy Burnham said there had been no meetings since Thursday morning.

Government adviser Sir John Bell has said a short national circuit-breaker may be necessary as he described other measures as “biting around the edges”.The regius professor of medicine at the University of Oxford told BBC Radio 4’s Today programme: “I can see very little way of getting on top of this without some kind of a circuit-breaker because the numbers are actually pretty eye-watering in some bits of the country and I think it’s going to be very hard to get on top of this just biting around the edges.“I think there will be every effort to keep schools open.“If in the end we have to take kids out for two weeks, calm it all down, and then start ideally embedded in a much more rigorous testing regime then that’s maybe what we may have to do.” 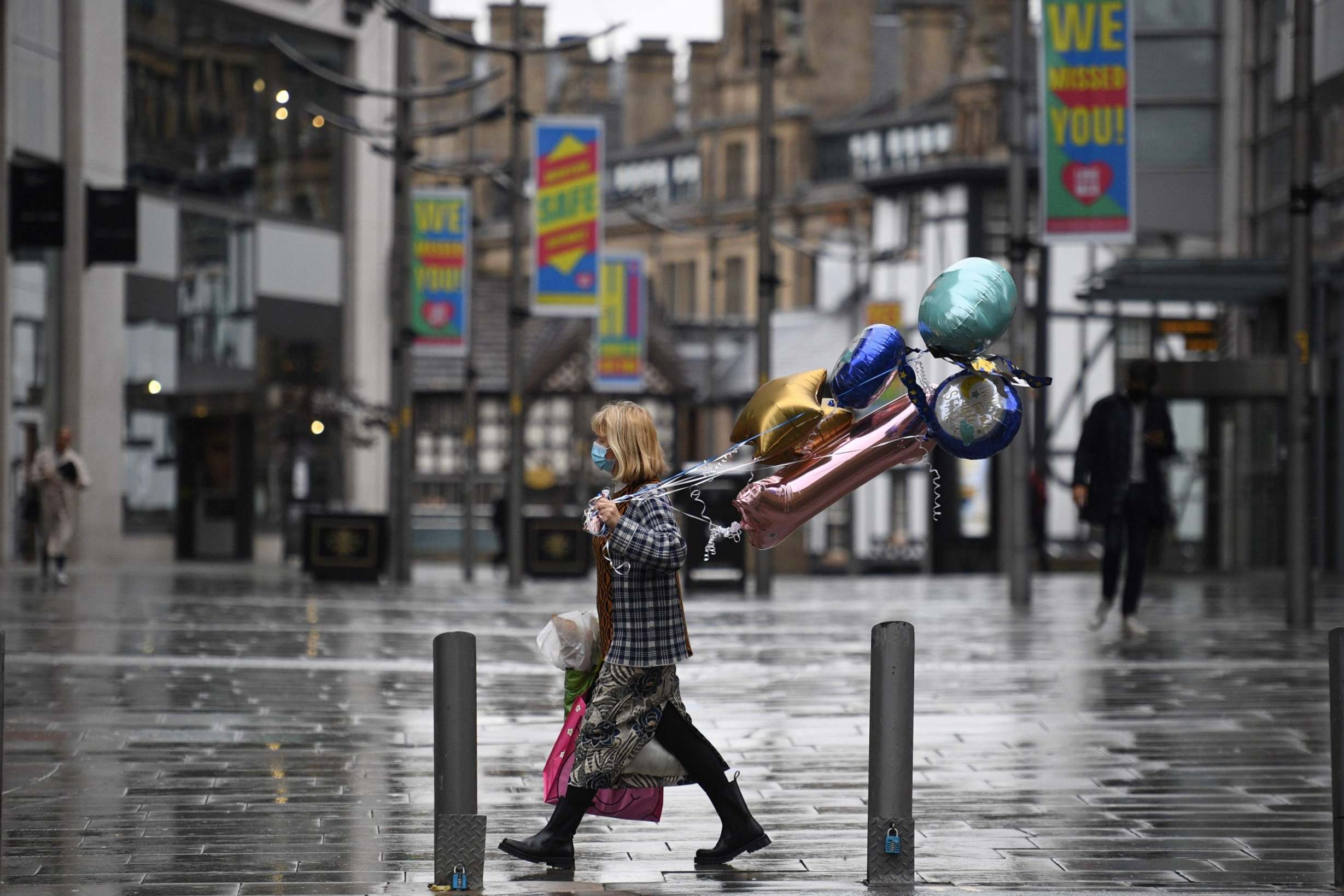