Jon Voight said in a video message on Friday that America must reelect President Donald Trump in order to save the nation from ‘evil’ Joe Biden.

‘Biden is evil. Trump must win. He’s real. He will bring back the people’s trust,’ Voight began.

In the video, Voight immediately slams Democratic presidential nominee, Joe Biden (left with his granddaughter Finnegan and right with his wife Jill on Sunday), and the liberal left. ‘Biden is evil. Trump must win. He’s real. He will bring back the people’s trust,’ Voight began

Voight, who has been a longtime supporter of the president, went on to claim that Biden’s plan for America is similar to that of former president Barack Obama.

‘Biden is an extension of the policies of Obama that weakened America and we cannot let that happen again,’ Voight told his more than 366,000 followers.

Voight called Trump ‘a man of integrity’ who is ‘fighting for you and this country’s welfare’.

Voight, who is the father of actress Angelina Jolie, has previously appeared at campaign rallies and events to support Trump.

Earlier this year, Voight praised Trump on two occasions as the coronavirus pandemic spread across the nation.

In a March video, Voight talked about American overcoming the pandemic, which at that time had started taking a toll on the epicenter, New York City.

Voight, who has been a longtime supporter of the president, went on to claim that Biden’s plan for America is similar to that of former president Barack Obama. Trump is seen with Voight outside the Oval Office in January 2020

‘God bless this nation and the entire creation and may God protect our president and his family,’ Voight said in the video.

A little less than two months later, Voight praised Trump for being a ‘hero’ who ‘will protect his country till the end, with dignity, honor, respect and love’.

‘We see president Trump as a magnificent soul, raising up this nation,’ Voight said in May. ‘He is a true patriot.’

Before the pandemic, Voight also appeared at in-person events in support of the president, including one that took place in January.

Voight also narrated a video that kicked off the first night of the Republican National Convention in August. 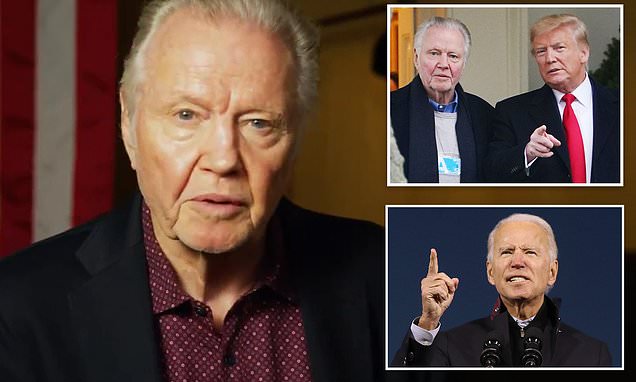