“A technical error caused a number of hashtags to not show related hashtags. We’ve disabled this feature while we investigate.”

Instagram’s “Related Hashtags” feature surfaced negative hashtags about the Democratic presidential candidate upon a search for #JoeBiden. Instagram has since disabled the feature.

For at least the last two months, a key Instagram feature, which algorithmically pushes users toward supposedly related content, has been treating hashtags associated with President Donald Trump and presumptive Democratic presidential nominee Joe Biden in very different ways. Searches for Biden also return a variety of pro-Trump messages, while searches for Trump-related topics only returned the specific hashtags, like #MAGA or #Trump — which means searches for Biden-related hashtags also return counter-messaging, while those for Trump do not.

Earlier this week, a search on Instagram for #JoeBiden would have surfaced nearly 390,000 posts tagged with the former vice president’s name along with related hashtags selected by the platform’s algorithm. Users searching Instagram for #JoeBiden might also see results for #joebiden2020, as well as pro-Trump hashtags like #trump2020landslide and #democratsdestroyamerica.

A similar search for #DonaldTrump on the platform, however, provided a totally different experience. Besides showing 7 million posts tagged with the president’s name, Instagram did not present any related hashtags that would have pushed users toward different content or promoted alternative viewpoints.

The difference between these two results, which an Instagram spokesperson told BuzzFeed News was a “bug,” prevented hashtags including #Trump and #MAGA from being associated with potentially negative content. Meanwhile, Instagram hashtags associated with the Democratic presidential candidate — #JoeBiden and #Biden, for example — were presented alongside content that included overtly pro-Trump content and attacks on the former vice president.

The difference in how the presidential candidates are treated by the platform raises more questions about how prepared Instagram and its parent company Facebook are for a pivotal US presidential election this November. After acknowledging it hadn’t done enough to prevent election interference during the 2016 presidential race, Facebook has invested heavily in security and get-out-the-vote initiatives for 2020, an election that CEO Mark Zuckerberg said will “be unlike any other.”

The Instagram bug, which was first noticed by the Tech Transparency Project, a nonpartisan tech watchdog group, suggests that hashtags associated with the two main presidential candidates have been treated differently since at least June. In most cases, algorithmically derived related hashtags are displayed to people who search for or click on a given hashtag, pointing them to more content that Instagram believes they might be interested in.

“What we’ve seen with the related hashtags with Biden is that there is so much vitriol, that it appears to be benefitting President Trump,” said Katie Paul, a director with the Tech Transparency Project. The fact that related hashtags didn’t surface for many Trump-related phrases also “removes any possibility that negative hashtags could be associated with his name or campaign slogans,” she added.

Instagram spokesperson Raki Wane described the issue as a bug on Tuesday. She pointed out that thousands of hashtags including #artofdrinks and #menshair had also been prevented from populating with related hashtags. She did not explain why the issue affected Trump hashtags and not those associated with Biden, or how long the problem had persisted.

“A technical error caused a number of hashtags to not show related hashtags,” Wane said in a statement Tuesday afternoon. “We’ve disabled this feature while we investigate.”

Hashtags, which are used regularly on Instagram posts, allow users to group posts into easily searchable categories that can also be followed as one would an account on the platform.

Instagram removed its “Related Hashtags” feature after it said a bug caused related hashtags to appear on some content but not others. These photos show what the feature looked like before and after it was removed.

Reached for comment, a Trump campaign spokesperson used the bug as an opportunity to lambaste social media platforms for alleged anti-conservative bias.

“Social media companies’ biases consistently make the strongest arguments for the President’s Executive Order on Section 230 reform,” said Ken Farnaso, a Trump 2020 deputy national press secretary, referring to the president’s push to end a law that gives internet companies legal immunity for what users post to their platforms. “It’s preposterous that Silicon Valley, the bastion of diversity and liberalism, is terrified of intellectual diversity and conservative voices.”

Nina Jankowicz, a fellow at the Woodrow Wilson International Center for Scholars who studies disinformation, said Instagram’s admission of a bug shows the company understands its suggestion algorithm impacts the content people consume. Related hashtags have also been used to spread conspiracy theories on the platform, and has been gamed by bad actors and foreign trolls.

“This feature doesn’t just benignly increase engagement,” she said of related hashtags. “It can lead to a tipping of scales in terms of equitable discourse.”

Instagram is believed to have been the target of foreign influence campaigns in the past. In 2018, third-party researchers compiled two reports for the Senate outlining the yearslong campaigns used by Russia’s Internet Research Agency to spread disinformation and sow discord.

“Instagram was perhaps the most effective platform for the Internet Research Agency,” one of the reports explained, and “is likely to be a key battleground on an ongoing basis.”

While Facebook and Instagram have ramped up investment to protect against election interference and check for disinformation, researchers like Jankowicz believe there’s still more to be done. She advocated for more human review, particularly around political hashtags.

“In times of crisis or volatile times ahead of an election, this stuff should be going under constant human review,” she said. “It shouldn’t be left up to a computer code to direct people’s consumption during a time like this.”

Ryan Mac is a senior tech reporter for BuzzFeed News and is based in San Francisco.

News – Instagram Displayed Negative Related Hashtags For Biden, But Hid Them For Trump 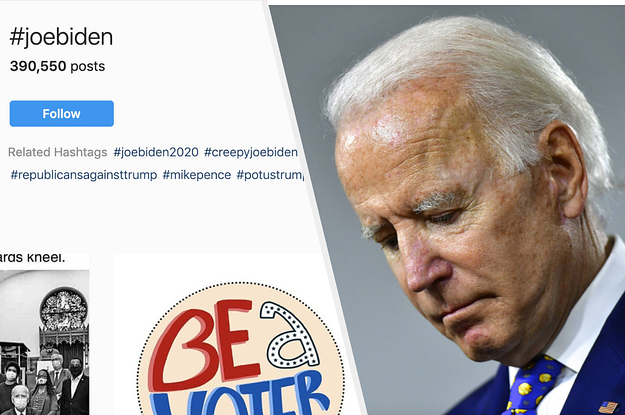