When Times readers heard the call of The Neediest Cases Fundâs annual campaign, they gave. And when a pandemic took hold, they gave again.

Last fall, Destinee Gonzalez Gil was a senior in high school, struggling with SAT exams and worrying about college applications.

Ms. Gonzalez Gil was among those profiled in the 108th annual campaign of The New York Times Neediest Cases Fund, which ran from October to January. Since Ms. Gonzalez Gil was featured in The Times, she has enrolled in the College of Mount Saint Vincent in the Bronx and is on track to study nursing with a full scholarship.

The Fund began in 1912, when the publisher, Adolph S. Ochs, sent a reporter out to New York Cityâs social services agencies to collect stories about hardship. The goal was to publish 100 stories. The short articles struck a chord with readers, who donated about $3,600. Since then, The Times has worked with nonprofit organizations each year and raised over $300 million total, which has been distributed not just to organizations in the city, but domestically and internationally as well.

All told, the 108th campaign raised $6,511,477.56. And after the 2019-20 campaign ended, The Fund responded to the Covid-19 crisis as it had in the wake of 9/11 and Hurricane Sandy, by starting a campaign to assist victims. The initiative, which ran from April to early May, had four beneficiaries: Feeding America; First Book; the NYC Covid-19 Response and Impact Fund, established by New York Community Trust; and World Central Kitchen. It raised $1,841,777.40.

Donate now to the 109th annual campaign of The New York Times Neediest Cases Fund. All proceeds go to 10 organizations providing assistance to those facing economic hardship. Make a tax-deductible donation through GoFundMe.

âThe generosity of Times readers to our annual campaign was incredible,â said Eileen Murphy, president of The Fund. âSo we were extremely grateful, but not surprised, when they stepped up again to support our Covid-19 campaign.â

The Fundâs 2020-21 campaign, the 109th, will feature weekly articles outside the paywall on how the agencies it supports are assisting those in need amid the pandemic. And it kicks off with a $1 million donation from the Ford Foundation.

âAs a result of Covid-19, millions of New Yorkers are dealing with unprecedented economic insecurity,â said Darren Walker, the foundationâs president. âWe in privileged positions must act to rise to the challenge of this historic crisis.â

The New York Times Company covers the administrative costs of the campaign, and the organizations spend the money at their discretion, often to cover holes in public assistance. Donations of $100,000 or more from trusts and estates go to The Fundâs endowment. Online contributions can be made through GoFundMe.

Last year, Catholic Charities Community Services used $1,100 from The Fund to pay for a specialized SAT course for Ms. Gonzalez Gil, who struggled with anxiety when taking tests. While preparing for the exam, she was also trying to help care for her two young brothers with severe medical issues at their home in a Bronx public housing complex. Attending to them had inspired her to pursue a medical career.

After Ms. Gonzalez Gilâs story was in The Times, she received special donations from readers, enough to help with her familyâs expenses, buy clothes for her brothers and purchase school supplies.

Two companies lent her a hand with her SAT prep, and nurses from around the country sent her gifts and cards with words of encouragement.

The coronavirus pandemic has been challenging â her father was furloughed from his position as a heating, ventilation and air-conditioning service technician at the college â but readersâ support helped Ms. Gonzalez Gil and her family get by.

Over the summer, Ms. Gonzalez Gil took classes with the stateâs Higher Education Opportunity Program, which helps low-income students prepare for college, and she interned at the mayorâs office and worked on the census outreach campaign through the stateâs Learn and Earn program. She started her college coursework this week.

As a mother of four, Erika Cuate has struggled to keep her children engaged and learning during summer break. âItâs hard because sometimes they want to be on the phone, and I have to make them read,â said Ms. Cuate, 32.

She received help encouraging them to read through a program supported by First Book, a nonprofit that distributes free and low-cost books to children. To help homeless students continue to learn as New York City schools moved to virtual instruction, the American Federation of Teachers offered to buy more than 10,000 books and other materials from First Book. The supplies were distributed to about 2,500 children in shelters operated by Win, a major provider of shelter housing in the city.

Ms. Cuateâs children were among those who were able to get free books this spring, picking them up at their Win shelter in Brooklyn. Her oldest child, Gelber, 12, picked up âHello, Universe,â a novel about a boy and a guinea pig who get stuck in the bottom of a well, and âNyxia,â a science fiction book featuring a teen protagonist who signs up for a program to discover a new planet.

Gelber, who likes dystopian and science fiction, said he has started reading more, even staying up until 4 a.m. to finish reading âNyxia.â

His last match was in late 2018, when he injured his shoulder and was forced to rest. As he took up training again, Brooklyn Community Services used $300 from The Fund to buy him boxing gloves last fall. Earlier this year, he was preparing for a fight in the New York Golden Gloves tournament, an annual amateur boxing competition.

The tournament started in February but was disrupted when the city went into lockdown. Mr. Mcleodâs plans to become a professional boxer were derailed again, but he said the coronavirus crisis put things into perspective.

After his gym closed, Mr. Mcleod, 21, started training in Central Park. He also worked two jobs â as a package handler at a FedEx warehouse in Queens and as an activity specialist with Brooklyn Community Services. He hosts virtual boxing classes for children and tries to motivate them to stay active.

In the fall, heâs moving to New Jersey and is looking to find a job closer to his new place.

âI went through a lot, from surgery to not being able to go to the gym and having to stay home for three months because I had to let my shoulder heal,â he said. âAll that pain just motivates me to be great.â

Three years ago, Prioska Galicia, 23, was studying communications with hopes of becoming a journalist. She wanted to write about immigrant rights, in part because of her experience emigrating to the United States from Mexico as a child. But the college tuition hung over her head. She couldnât defer payments because she was undocumented, so she dropped out.

Ms. Galicia later enrolled in a job training program and was connected with Community Service Society, which used $121 from The Fund to buy her a MetroCard to support her commute to the program.

After Ms. Galicia shared her story with The Times, a literary agent reached out and encouraged her to write a childrenâs book about her life.

With that news, 2020 started out smoothly. Ms. Galicia was working as a call representative for New York Medicaid Choice, the stateâs managed care enrollment program, and paying off her college debt. But after the pandemic struck, her mother could no longer find work cleaning houses, and Ms. Galicia became the sole breadwinner as her young siblings navigated online schooling.

After a few months, her mother started working again, and Ms. Galicia took on a second job with Fresh Air Fund. Then, Ms. Galicia injured her head after a fall. The incident was a wake-up call. âIâm always checking on others,â she said. âI realized I had to take care of myself first in order for me to keep helping my family.â

She left the Medicaid job in July â her second job ended around the same time â and spent the rest of the summer relaxing and helping her siblings prepare for school. Sheâs currently focusing on finding a new job and writing her book.

The Times article emboldened her to discuss her immigration status, she said. Her goal, she said, is âto leave something that will impact others.â

Lilia Gizetdinova planned to complete a longtime goal in 2020 â passing a final exam that would open the door to applying for medical residencies in the United States.

She had been a practicing surgeon in Kazan, Russia, for 15 years before she came to America in the early 2000s. She was raising her children in New York and studying in 2017 when she learned her husband, who had stayed behind in Russia, had died.

Difficulties mounted, and when Ms. Gizetdinova fell behind on rent last year, she reached out to the Edith and Carl Marks Jewish Community House of Bensonhurst, a beneficiary agency of UJA-Federation of New York, for help as she continued her studies. After she was profiled in The Times, she received letters from supportive readers who shared their stories of immigration and pursuing careers in the United States.

âI really appreciated that they helped me,â she said. âI felt not alone in this world.â

Ms. Gizetdinova said she kept all the letters and responded to each one. She continued to reread them as she prepared for that exam in May, which had to be postponed because of the coronavirus crisis. Sheâs scheduled to take the test soon, and if she passes, she will apply for a residency program.

âIâm going to be the happiest person in the world to go back to my field,â she said.

Araya Manning turned to dance and theater as an escape while she navigated foster care and depression during her first years of college. Now, pulling from her own experience, she helps teenagers express themselves through the performing arts.

As assistant artistic director at the Possibility Project, an arts and community nonprofit she has volunteered for since June 2019, she meets with 10 students twice a week on Zoom, where they explore music production and graphic design, as well as video editing, a hobby that Ms. Manning, 25, picked up this year.

âThereâs a big topic that we talk about, which is gender roles and the weight of that. That section is too heavy to do online, because it kind of leaves people exposed,â she said. âYou donât want to be crying in the house around your family.â

As the city locked down in March, Ms. Manning, who described herself as a homebody, said she didnât mind at first. âThen it kept going, and I started to feel isolated. It triggered my depression a little bit,â she said.

She was also dealing with problems in her New York City Housing Authority apartment, which lacked heat last year, prompting her to buy portable heaters with a gift card from Childrenâs Aid.

Ms. Manning recently began her final semester at Hunter College, where she is majoring in social work. While she is excited for this milestone as a first-generation college student, she worries about her job prospects.

âIâm hoping by the time I graduate things will have regulated enough to the point where they are hiring again,â she said, âbecause right now it seems very uncertain.â

Ms. Manning would like to move to Los Angeles, a city with a thriving dance scene, within the next three years. âI also just want to move somewhere that is almost always sunny,â she said.

News – In a Year Like No Other, a âHistoric Crisisâ of Need 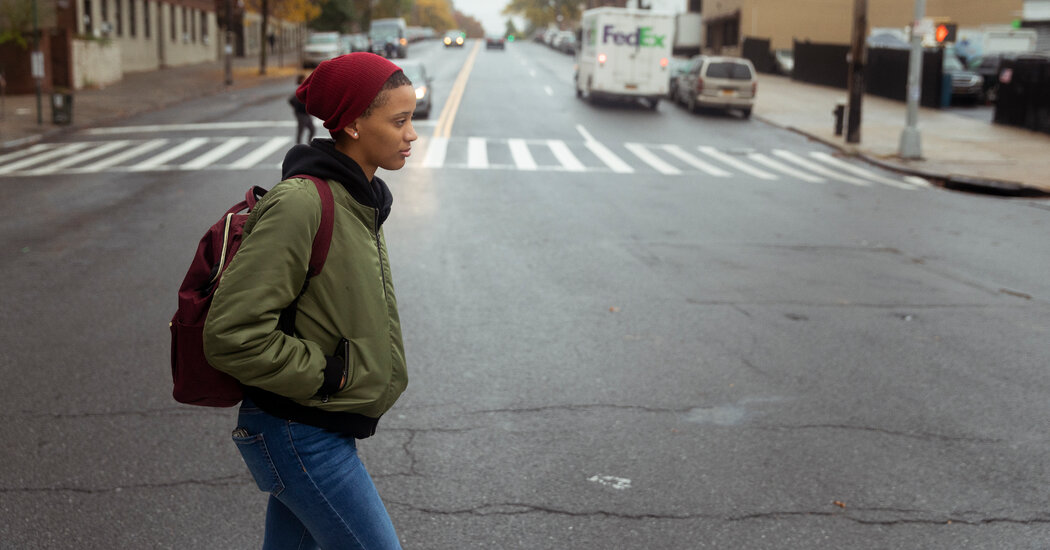