Kai Havertz accepted a huge chunk of the blame himself and says his team-mates must do likewise after Chelsea were their own worst enemies in twice blowing a lead in a wild 3-3 draw with Southampton.

Havertz admitted that his own error in the lead up to Southampton’s first goal, losing possession for Danny Ings’ smart finish, “changed the game”.

Chelsea had been 2-0 up and cruising after Timo Werner’s fine brace, but Ings’ fourth league goal of the new campaign teed up a madcap second-half.

Che Adams equalised for Saints after a defensive mix-up between Kepa Arrizabalaga and Kurt Zouma, only for Havertz to put Chelsea back in front.

The Germany midfielder’s first league goal for the Blues could not win the day however, as Jannik Vestergaard’s added-time effort forced a draw at Stamford Bridge.

“We had 42 good minutes in the first-half but then I made a mistake and we conceded a goal, which changed the game a little bit.

“We got it to 3-2 and then we had to take the result and get the win at home but we didn’t do it.

“We have to take responsibility for that; we have 11 players on the pitch and everybody has to work hard so we don’t concede goals like this.

“It’s not always one person who makes the mistake so we have to look at our mistakes and try to solve the problems.

“It would have been great if my goal was the winner. Of course, I’m happy with that but very frustrated too about the result.

“We had to take these three points at home and we can’t do that so it was a bad day for us.”

𝗙𝗿𝗮𝗻𝗸 on @TimoWerner: ‘They were really good individual goals and he looked sharp. It’s great for his confidence and we’ll see a lot more of that.’ 👊#CHESOU pic.twitter.com/AwG3isx2JI

The Blues boss has maintained however that formation switches are not to blame for Chelsea’s leaky defence.

“I don’t think it’s conceding goals in relation to the shape of the team, that’s something for me to think about all the time,” said Lampard.

“I’m not dead-set on playing that formation, there were loads of great things from the 4-2-3-1.

“It was challenging, a high-paced game; they came at us fast and often,” he told Southampton’s official club website.

Lampard thinks his team need to cut out the mistakes after they slipped up to Southampton at home.

Chelsea v Southampton offers goals, a lack of midfield structure and an opportunity for Kai Havertz.

The Premier League spent almost the same as the top divisions in France, Spain, Germany, Portugal and Holland combined…

Havertz speaks about the Premier League and how he is adjusting to life in England. 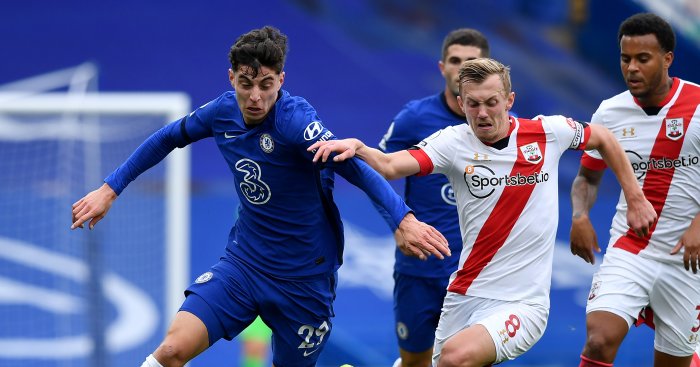