Shocked French teachers vowed to continue encouraging their pupilsâ âcritical spiritâ by raising contested subjects after an Islamic terrorist beheaded a secondary school teacher who showed his students caricatures of the Prophet as part of a freedom of speech discussion.

Representatives of teaching unions met the education minister Jean-Michel Blanquer and the prime minister Jean Castex on Saturday, hours after the death of 47-year-old history and geography teacher Samuel Paty.

Before the meeting Jean-Remi Girard, president of the secondary school teaching union, said teachers were âdevastatedâ but would not be cowed. âIt is terrifying to see that in France in the 21st century, a teacher can be decapitated in the street for doing his job,â Girard said.

âWe will continue to speak about freedom of speech. If there are difficult subjects, we will continue to teach them. We will try to encourage our studentsâ critical spirit and explain that everyone has the right to disagree.â

The French president Emmanuel Macron, who described the killing as a âtypical Islamist terrorist attackâ, said France was engaged in an âexistentialâ battle against terrorism.

The 18-year-old killer was born in Moscow but has Chechen roots. His family arrived in France when he was a child, investigators said. Police were questioning his parents, grandfather and 17-year-old brother and yesterday detained another five including the father of a pupil at the school and an acquaintance of his known to the intelligence services.

Paty was taking a moral and civic instruction class on 5 October at his school at Conflans-Sainte-Honorine, north west of Paris. These classes are obligatory and cover subjects including secularity, the death penalty and abortion.

As part of a discussion on freedom of speech, Paty showed the class some of the controversial Charlie Hebdo caricatures of the Prophet Muhammad. Conscious that this might cause offence to some of his Muslim pupils, Paty suggested they could look away or leave the classroom.

Afterwards, the school received complaints about the use of the cartoon in the lesson and demands that Paty resign.

After a meeting between the schoolâs head, teachers, parents and education officials, the parents lodged an official legal complaint. Paty lodged a counter complaint for âdefamationâ.

The father of one school pupil published a video on YouTube calling the teacher a âthugâ who needed to âgo back to school himselfâ and calling on parents to join him in demanding that the teacher face disciplinary action.

The teacher had gone to the local police station, with the school head, earlier this month after a legal complaint about his lesson.

He reportedly told investigators he could not understand what had happened because the daughter of the father who had complained was not in class the day he showed the cartoon.

The teacher lived near the school and was used to walking through a wood to get home, but had recently decided to change his route to walk through a residential area because he felt threatened.

The college received several âmenacing callsâ in the following days. The anti-terrorism prosecutor Jean-Francois Ricard says the police are trying to establish events in the run-up to the crime and whether the killer had accomplices.

A crowd of mourners including fellow teachers, local politicians and officials and former pupils of Paty gathered outside his school on Saturday.

Even in a country that has confronted some of the worst acts of terrorism in Europe over the past eight years, Fridayâs murder was shocking in its savagery, sparking an outpouring of anger, anguish and revulsion across France.

On social media the hashtag #JeSuisProf (I am a teacher) emerged and went viral, reminiscent of #JeSuisCharlie, the 2015 expression of solidarity with Charlie Hebdo after a massacre at its offices.

For France, the struggle against terrorism and the prevention of the radicalisation of home-grown jihadis has become what Macron described on Friday as an âexistential battleâ. Paris has been on high alert in recent weeks after the trial of 14 people suspected of being linked to the 2015 attacks opened in September.

But for the countryâs intelligence agencies and police, the struggle of late has shifted from not only foiling planned large-scale terrorist actions but also identifying individuals â often young â who are not on the security servicesâ radar and not flagged as a threat risk.

To mark the opening of the long-awaited hearing â scheduled to last until November â Charlie Hebdo republished caricatures of the Prophet Muhammed including those that led the Islamist gunmen SaÃ¯d and ChÃ©rif Kouachi to attack its offices. killing 12 people, and AmÃ©dy Coulibaly to shoot a police officer and kill four people at the Hyper Cacher supermarket.

The reprinting of the cartoons in turn led to an 18-year-old Pakistan-born man stabbing and seriously injuring two people outside the former offices of Charlie Hebdo in what the French authorities said was âclearly an act of terrorismâ three weeks ago.

Ricard said the teacher had been âassassinated for teachingâ and the attack was an assault on the principle of freedom of expression. âThis is the second attack to take place during the Charlie Hebdo trial which shows the high level of terrorist threat we face,â Ricard said.

On Frida, Abdallah Zekri, president of the Observatory of Islamophobia, described Fridayâs beheading as a âterrible and horrific act committed in the name of my religion using the pretext of Charlie Hebdoâ. 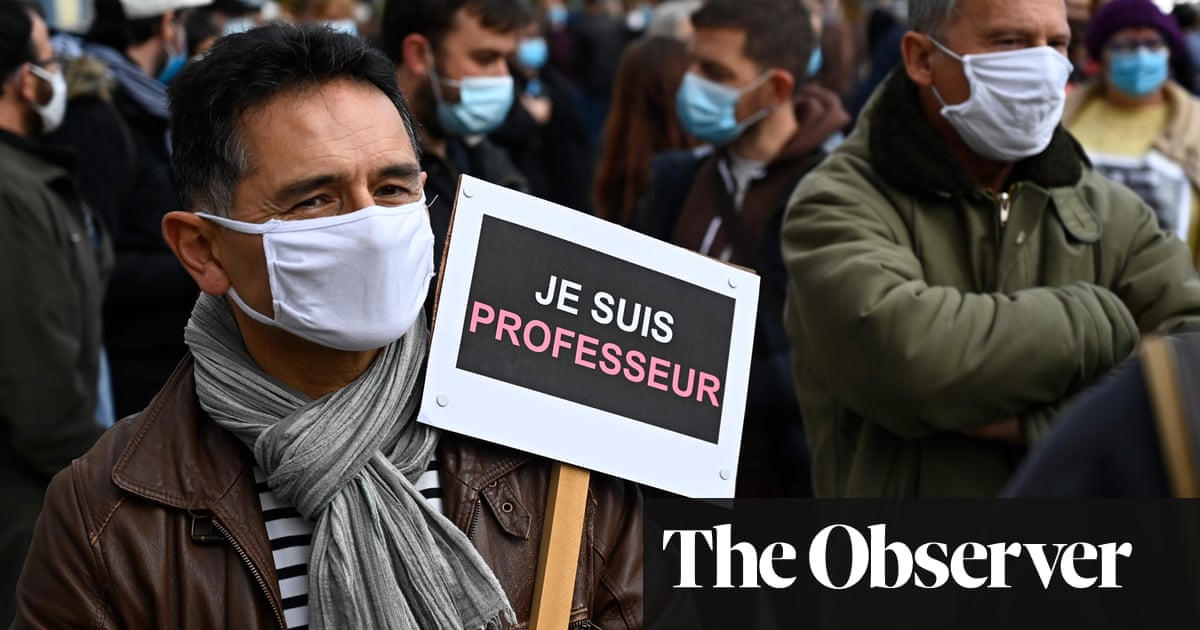