The French president describes it as a “cowardly attack”, saying the man was killed because he “taught the freedom of expression”.

The teacher killed in a suburb of Paris in an Islamist terror attack has been named as Samuel Paty, Sky News has confirmed.

The history teacher, who is said to have discussed images of the Prophet Muhammad with his pupils, was beheaded.

The suspected attacker was shot dead about 600 metres from the scene, according to the AP news agency.

According to Le Parisien newspaper, the attacker was an 18-year-old man of Chechen origin, who was carrying a knife.

French anti-terror prosecutor Jean-Francois Ricard said the suspect, who had been granted a 10-year residency in France as a refugee in March, was not known to intelligence services.

He added that a text claiming responsibility and a photograph of Mr Paty were found on the attacker’s phone.

The suspect had been seen at the school asking students about the teacher, and the headteacher said he had received several threatening phone calls.

In an interview with French broadcaster BFMTV, the suspect’s uncle insisted there was “no way” his nephew could “just go and cut off a head like that”.

He said: “He was discreet, he was nice to everyone, there wasn’t anything negative about him.

“If we had known he was into religion, we could have anticipated it, but we actually didn’t see it coming.

“If he was alive, I would have told him: ‘Why did you do that? What happened in your mind?’

“His father and I would tell him: ‘Be careful, don’t hang around outside, stay out of trouble’.”

The relative went on to stress “we’re not killers” in reference to the wider family, adding: “We never told him to do anything.”

He then said he hoped the victim’s family would accept his condolences as he apologised to wider France.

“We apologise – in front of the whole of France – we apologise. The Chechen community is not like that.

“The teacher has done his job; I have nothing against the teacher. I’m sorry, really, we are grateful to France.”

Video of the suspect’s last moments is thought to feature the sounds of the gun being fired, followed by a volley of shots as he was killed.

The fatal shots were believed to have fired after the attacker refused to put down his gun.

The weapon was found at his side. Reports say it was an airsoft gun that fired plastic pellets.

The country’s anti-terror prosecutor earlier called the incident a stabbing, but both the Reuters and AP news agencies said police sources told them the victim was decapitated.

The attack happened on a street in Conflans Sainte-Honorine, northwest of the French capital, at about 5pm local time.

Visiting the scene, Emmanuel Macron called it a “cowardly attack”, saying that the man was a “victim of an Islamist terrorist attack” and was killed because he “taught the freedom of expression, of believing and not believing”.

France’s anti-terrorism prosecutors have said nine suspects have also been arrested, including the grandparents, parents and 17-year-old brother of the attacker.

Mr Paty reportedly showed images of the Prophet Muhammad in class during a discussion about freedom of expression on 5 October.

Sky News understands that among those who complained was a parent who posted a video online about the incident. That parent is among the nine arrested.

However, another parent of one of the teacher’s pupils said Mr Paty asked Muslim students to raise their hands and to leave the classroom before they were taught about the image.

“He told me, no it was not to offend us, it was images that he didn’t want us to see. My son understood that at no moment he (teacher) had lacked respect.”

The Elysee Palace said that there would be a national ceremony at a future date to pay homage to Mr Paty.

Education minister Jean-Michel Blanquer tweeted that the republic had been attacked through the “despicable assassination of one of its servants”.

He added that “unity and firmness are the only answers to the monstrosity of Islamist terrorism”.

It is the second terrorism-related incident since the opening of an ongoing trial on the newsroom massacre in January 2015 at the satirical newspaper Charlie Hebdo after the publication of caricatures of the prophet of Islam.

As the trial opened, the paper republished caricatures of the prophet to underscore the right of freedom of expression.

Exactly three weeks ago, a young man from Pakistan was arrested after stabbing, outside the newspaper’s former offices, two people who suffered non life-threatening injuries. 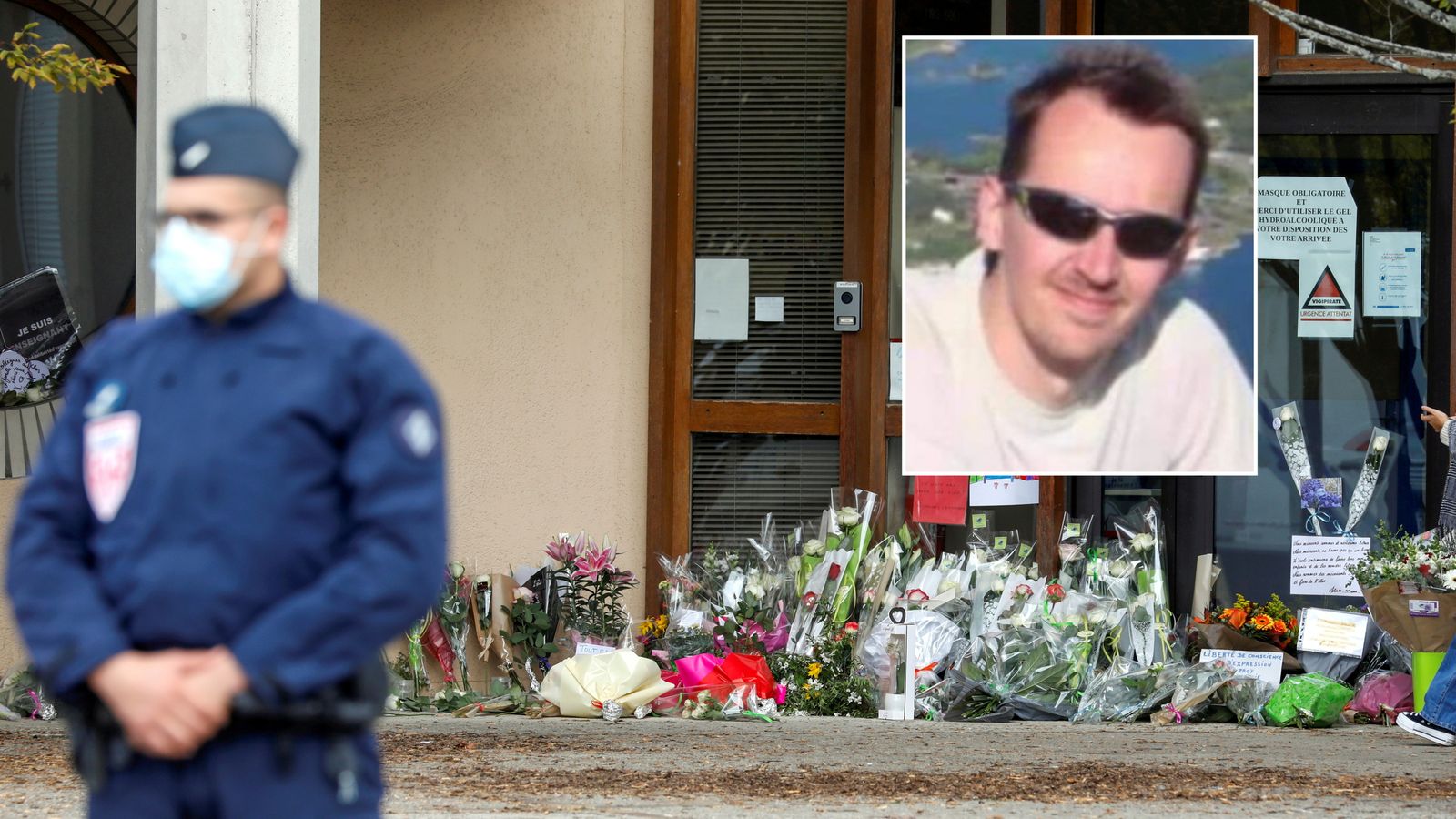