Former Prime Minister Tony Blair has been accused of breaking the two-week quarantine rules after he was photographed at a London club 10 days after a trip to the US.

Mr Blair, 67, was pictured at Harry’s Bar in London’s Mayfair less than two weeks after returning from a two-day trip to the White House.

A spokesman for the former prime minister said Mr Blair was invited to an ‘international conference’ because of his ties to the Middle East peace agreement between Israel and the UAE.

He has been accused of ignoring the quarantine rules after a special dispensation from the rules was not awarded to him, according to The Sunday Telegraph.

His spokesman denied the claims and said Mr Blair ‘was told to follow the guidance on international conferences which he did’.

Tony Blair, 67, was pictured at Harry’s Bar in London’s Mayfair less than two weeks after returning from a two-day trip to the White House

Mr Blair was pictured mingling with guests on the South Lawn of the White House on September 14. He held his face mask while posing for photographs

But Mr Blair is considered a private ­citizen since he left his role as Middle East envoy in 2015.

‘Mr Blair was tested for Covid before departing the UK, on arrival at the White House, when he returned to the UK and has been tested several times since. All tests have been negative. No other meetings were attended.’

David Jones, a Conservative member of Parliament’s public administration committee, told the newspaper ‘it sets an appalling example to travellers if a former prime minister appears to flout the rules’.

Mr Blair was pictured mingling with guests on the South Lawn of the White House on September 14. He held his face mask while posing for photographs.

Returning to the UK on September 16, Mr Blair reportedly travelled by private jet on the £7,000-an-hour Falcon 7X.

He is believed to have had with him a team of Scotland Yard protection officers – paid for by the British taxpayer.

Ten days after his return, on September 26, he was pictured leaving ‘one of the most elegant and sophisticated private members’ clubs in London’.

David Jones, a Conservative member of Parliament’s public administration committee, told the newspaper ‘it sets an appalling example to travellers if a former prime minister appears to flout the rules’. Pictured, Mr Blair leaving the club

Those failing to follow the rules on self-isolation could be liable for a £1,000 fine, or potential prosecution.

Sir Keir Starmer has returned Labour to being a ‘politically competitive’ party which is in a position to win a general election, Tony Blair says.

The former Labour leader and prime minister praised his successor’s performance in the three months since he won the contest to replace Jeremy Corbyn.

Mr Blair told the PA news agency: ‘Keir is doing a good job – a very good job actually – and I think he has put Labour back on the map. He has made them competitive again.

‘He will know and we all know that there’s a long way to go before a general election and many things to be done.

‘But in these months since he has become the leader, he has I think completely changed the image certainly of the Labour leadership amongst the public and he deserves respect and admiration for that.’

Asked if Sir Keir had made Labour a party that can win again, the former prime minister said: ‘He has put it in a position where it can.

‘There are a whole set of questions around policy and so on that in time I’m sure and know he will come to.

‘But has he made it politically competitive again which it hasn’t really been for quite a long period of time? Yes – and that is a huge step forward for the Labour Party.’

Labour has failed to win a general election since Mr Blair left office in 2007, with Gordon Brown, Ed Miliband and Jeremy Corbyn all failing to secure majorities.

A Foreign Office spokesman said: ‘The FCDO provides travel exemptions to diplomats travelling on business relating to the interests of the UK, ­representatives of international organisations, and their families and dependants. Those issued an exemption will not need to self-isolate.’

As of last month, police forces have only issued 38 fines from over 4,000 referrals from public health authorities.

The story emerged as Britain recorded its highest number of coronavirus deaths in four months after another 150 victims were announced.

More than half the population are also living under tightened coronavirus restrictions – with London entering tier two curbs and Lancashire joining Liverpool in tier three.

But Boris Johnson is resisting calls to plunge the whole country into a two-week circuit breaker lockdown, amid fears of the harm it could do to the economy.

In July, Mr Blair said infrastructure to stop the spread of the virus was critical as another national lockdown would not be possible, suggesting that people instead need to learn to live safely with the virus.

Mr Blair described the crisis as ‘the biggest challenge logistically and practically’ a government has ever faced, but criticised ministers for not yet putting in place an ‘infrastructure of containment’.

He said: ‘The reality is that we’re going to be living with Covid-19 – we’re not really going to be able to eliminate it.

‘And when you look at what has been happening in other countries, as lockdown has been eased, then more and more problems have appeared and many countries, having gone into lockdown then easing it, are finding spikes in the disease.

‘You can’t be sure of this but there’s at least a 50/50 chance that you have a resurgence of the disease in the autumn and that’s why it is absolutely essential now to prepare for that.

‘And to put in place every single last bit of containment infrastructure that you possibly can to make sure that if that happens you are able to control the disease, because you’re not going to be able to go back into the lockdown that we endured in March, April and May.’

He took aim at the Government’s 14 day quarantine rules for people returning to the UK from countries where coronavirus is on the rise as he said the self-isolation period could be cut ‘substantially’.

He called for ministers to take a more ‘sensible’ approach to calculating risk amid rising speculation that Croatia and Greece could soon join Spain and France on the UK’s ‘red list’.

Meanwhile, Mr Blair also suggested ministers had been over reliant on officials during the crisis and that they needed to recognise ‘where the science ends and judgements begin’. 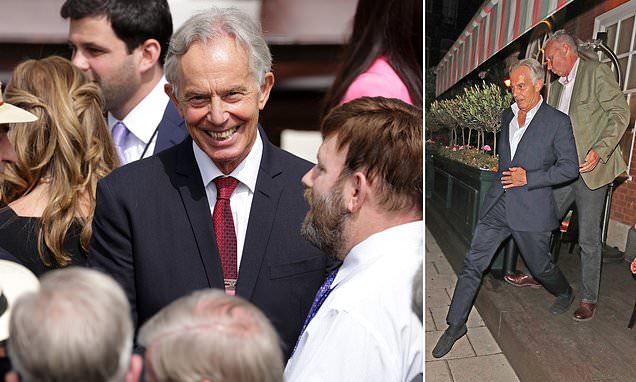