N.F.L. fans in the Northeast, lusty booers in normal times, have had to watch their teamsâ dim performances from afar, without recourse. âI have no way to release my venom,â one Jets fan said.

Drew Kanevsky, a Jets season-ticket holder since 2002, misses the familiar game day rhythms when the team is at home: putting on his trusty No. 74 Nick Mangold jersey, tailgating at Lot K1 at MetLife Stadium, explaining nuances to his 10-year-old son, Anthony, that the television feed doesnât show.

But in this fraught N.F.L. season in which fans have mostly been barred from stadiums because of public health concerns, Kanevsky finds himself pining for a cherished bygone ritual: booing his favorite team.

âMore than you can understand,â said Kanevsky, 42, of Belleville, N.J. âBecause I have no way to release my venom.â

The void Kanevsky feels is yet another consequence of a pandemic that has muted so many joyous occasions â buzzer-beating shots and game-winning field goals drilled in empty venues; the Stanley Cup awarded in Edmonton, Alberta, to a team from Tampa, Fla., that beat a team from Dallas â but also deprived the sporting world of a critical side of fandom: the collective venting.

Watching from home â âmiserably,â Kanevsky said â as the winless Jets plod through the season, he has groaned, seethed, even changed the channel. Nothing, he said, has adequately replaced the âweird satisfactionâ he derives from expressing his disapproval in person, surrounded by his people.

This sense of loss is being felt, maybe more than anywhere else across the N.F.L.âs empire, along a section of the Northeast corridor. Jets and Giants fans â in a boon to their mental health, perhaps â are prohibited from attending games at MetLife all season. About 90 miles south, the slumping Philadelphia Eagles have been cleared to host 7,500 people â a small fraction of the normal crowd size â at Lincoln Financial Field beginning with Sundayâs game against the Baltimore Ravens.

In those parts, a general affinity for booing has collided with a grim answer to that old metaphysical question: If ugly football is played and no one is there to see it, yes, the results still count in the standings.

In the New York metropolitan area, the locus of N.F.L. agony, the Jets and Giants are each 0-5, outscored by a combined 138 points, and their game film is best handled by a hazmat crew. The Eagles, at least, have won a game â but only one â and their demanding fan base treats the teamâs record, 1-3-1, as a personal affront.

Booing is a basic human need in Philadelphia, less an impulsive reaction for its sports fans than a state of mind (a Twitter account, @Phillybooing, emits lengthy boos when a sports team there stumbles, which is often). Eagles fans proudly admit to booing draft picks whoâve never played a down. But booing is also an expression of love â an accountability check of sorts â and without it, some fans are feeling unmoored.

âIâm a lifelong Philadelphian â this is in my blood,â said Stephanie Ruggeri, 47, an Eagles season-ticket holder for 23 years. âThe booing, really, comes from a place of âWe know you can be doing better than this.â Itâs not so much like, âWe hate you as a person.ââ

She has wondered whether players miss it, and at least some of them kinda, sorta do. In empty stadiums, the antiseptic atmosphere makes games feel like glorified practices, Giants linebacker Blake Martinez said, without the regular auditory cues, anticipatory murmurs and paroxysms of emotions that announce ebb and flow.

âFor certain people, Sunday is their day â they get to let out their aggression at a football game, cheering or booing, and thatâs their weekly decompression theyâre not getting right now,â Martinez said in a telephone interview. âObviously, for me, Iâm fine with no more booing. But is it worth it to have those awesome cheering moments if you also get the negative moments of booing and all that? Over all, yeah, Iâd rather have the fans in the seats going crazy.â

So far, 18 of the leagueâs 32 teams have been cleared to allow fans in their stadiums at diminished capacities. The seats are often filled by cardboard cutouts of fans, and the television networks have been playing prerecorded crowd noises to mask the eerie quiet for viewers at home. During a game in the second week of the season in Philadelphia, Fox, perhaps catering to its audience, occasionally sprinkled in some catcalls after the Eagles quarterback Carson Wentz threw an incompletion or interception.

Philadelphia lost that game, to the Los Angeles Rams, by 18 points, but for many fans a more embarrassing indignity befell the Eagles the next week when Coach Doug Pederson sent out the punt team on fourth-and-12 from the Cincinnati 46-yard line late in overtime, effectively conceding a tie.

âI really feel that if fans were in the stadium, the rain of boos that would have come down would have made him second-guess that decision,â said Eric Emanuele, 38, of Clinton, N.J., whose family has had Eagles season tickets for nearly 30 years. âTo not be able to voice your displeasure in that moment â oh, absolutely, thatâs something that hurts.â

On these fallow Sundays, the game day experience is not quite a solitary pursuit for Emanuele â he now partakes with about 12 others on the deck at his home, where he refrains from screaming so as not to disturb his neighbors â but rather an underwhelming imitation, a reminder of where heâd rather be.

That sense of belonging is vital to the identity of sports fans. And itâs harder to recapture during the pandemic, sports psychologists say, when people are discouraged from congregating in large groups. Rich Knott, 60, of West Caldwell, N.J., said he often conveyed his emotions at Giants games â whether it was bewilderment, disgust or, less likely over the last few years, euphoria â just by making eye contact with strangers in Section 124.

âItâs a way to communicate fitting in,â said Christian End, a social psychologist at Xavier University who studies sports fansâ behavior, âeven though, you know, quite frankly, the athlete or whoever isnât going to hear you from the last row of the stadium.â

On some level, Kanevsky realizes this. It isnât as if, he lamented, Coach Adam Gase is going to resign just because Jets fans angered by his play calling or the teamâs (lack of) execution are yelling at him from behind the benches. But thousands of like-minded fans, as paying customers, have a strong voice. At stadiums, they have a direct conduit to objects of their ire, an opportunity to provide immediate feedback. That release now goes unfulfilled.

âI donât want to boo; I want to go there and cheer when they win,â Kanevsky said. âBut how else can we tell them that this is mind-numbingly frustrating? Thatâs all we have. When itâs third-and-7 and he runs a 2-yard out, what am I going to do? I have to tell them. They have to hear that.â

Football fans are not alone in being denied vocal vengeance. With Major League Baseball banning all fans from stadiums in the regular season, the Houston Astros avoided blowback after they were caught in one of the sportâs worst cheating scandals (though a man with a megaphone scolded them from an apartment balcony overlooking the stadium at a recent playoff game in San Diego).

âAny time someoneâs in the wrong in sports this year, thereâs never going to be a real penalty from the public spotlight perspective,â said Greg Stengel, 25, a Jets season-ticket holder from Morristown, N.J. âIf Jets games were happening right now, it would be a clown show.â

As Stengel well knows, Jets games are, indeed, happening. Their performance in the home opener, a 31-13 loss to San Francisco that fell on the second day of Rosh Hashana, prompted Stengel, who watched while observing the holiday with his family, to bemoan, âWhat a great way to ring in the New Year, right?â

Among the regrettable moments that afternoon, one in particular irked Kanevsky: With the Jets trailing, 24-3, late in the third quarter, Gase, the coach, played it safe on fourth down, choosing to attempt a short field goal rather than try for a touchdown. The kick was good, and when the fake crowd cheered the meager three points, Kanevsky felt like throwing his television out the window because, he said, really, what else could he have done?

News – Footballâs Boo Birds Are All Cooped Up 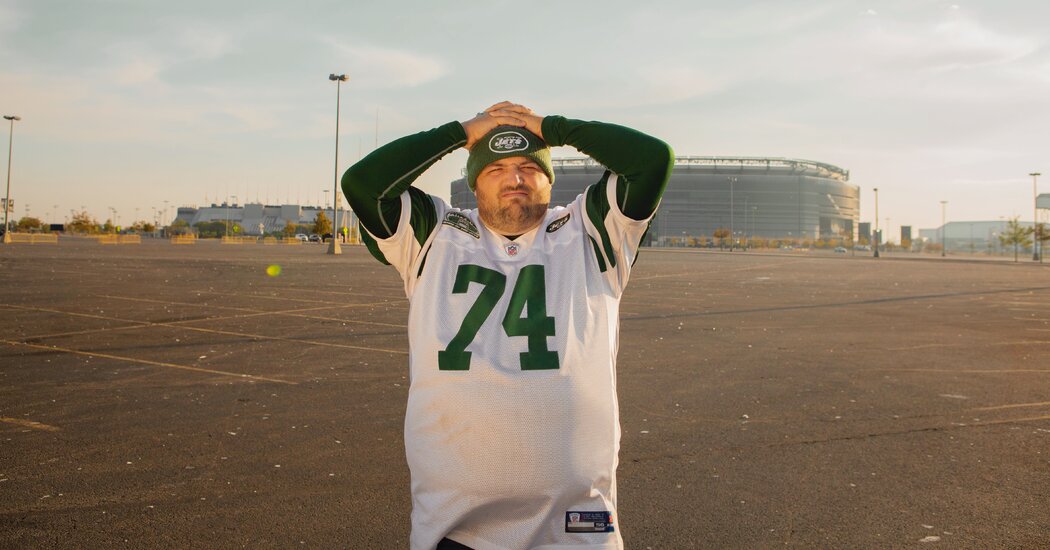