Greater Manchester is set to run out of beds to treat people left seriously ill by Covid-19, and some of the region’s 12 hospitals are already full, a leaked NHS document has revealed.

It showed that by last Friday the resurgence of the disease had left hospitals in Salford, Stockport and Bolton at maximum capacity, with no spare beds to help with the growing influx. The picture it paints ratchets up the pressure on ministers to reach a deal with local leaders over the region’s planned move to the top level of coronavirus restrictions.

It suggested that Greater Manchester’s hospitals are quickly heading towards being overwhelmed by the sheer number of people with Covid needing emergency care to save their lives, in the same way that those in Liverpool have become in recent weeks. By Friday 211 of the 257 critical care beds in Greater Manchester – 82% of the total supply – were already being used for either those with Covid or people who were critically ill because of another illness.

Greater Manchester hospitals admitted 110 new patients with confirmed or suspected Covid in the 24 hours before the spreadsheet was produced and shared with NHS bosses on Friday, illustrating the intense pressure they are coming under. That took the total number of Covid cases they were dealing with then to 520.

The revelation came as the impasse continued between the government and Andy Burnham, the Greater Manchester mayor, as well as many other local leaders and MPs. Ministers have designated Greater Manchester a tier 3 area, requiring the toughest sort of local lockdown, but Burnham said this can only happen with greater support for businesses forced to close such as pubs, and those left without income.

Michael Gove, the Cabinet Office minister, escalated the government’s war of words with Burnham on Sunday by accusing him of risking lives by opting for “press conferences and posturing” rather than agreeing to new coronavirus rules.

Burnham has written to Boris Johnson, Keir Starmer and other Westminster political leaders urging them to hold a parliamentary vote to decide the level of financial aid for areas under the strictest tier 3 restrictions.

The disclosures came soon after another document, obtained by the Manchester Evening News, showed that on current trends the region could have more hospital deaths and more intensive care beds occupied by late November than it had at the peak of the pandemic in early to mid-April.

It warned that a number of the area’s hospitals, including those in Tameside and Stockport, could have double or even treble the number of patients needing intensive care by 10 November than they have beds for. Bolton, for example, could have 51 patients all needing its 18 beds.

“These projections paint a stark picture, with the possibility in a worst-case scenario that some intensive care units in the city potentially run out of beds within weeks. They also suggest that the number of patient deaths may even overtake those seen during the peak of the pandemic earlier this year,” said Dr Rob Harwood, chair of the British Medical Association’s consultants committee.

“The last thing we want to see is a repeat of the numbers of cases – and the subsequent pressures on hospitals – that we saw back in April, but worryingly this analysis forecasts just that.

“The situation in the region is alarming, with the number of new infections remaining worryingly high, and doctors are incredibly concerned that unless the rate of transmission is curbed urgently, it is possible that we may soon see a further increase in patients needing intensive care and, tragically, an increase in deaths.”

A spokesperson for the NHS in Greater Manchester said: “We are monitoring the situation with our hospital admissions, overall beds and ICU beds very, very closely. It’s not unusual for 80-85% of ICU beds to be in use at this time of year and our hospitals work together if there are particular pressures in any one area, to ensure the best care for patients who need the high level of support ICU provides, both for Covid and for other reasons.”

The Guardian can also disclose that hospitals in Liverpool, the centre of the second wave of the disease, had to send some patients to intensive care units in other hospitals in the north-west because theirs could not cope because staff have been off sick or in isolation because of Covid.

A well-placed NHS figure in Liverpool said: “There have been a number of ICU patient transfers over this weekend to try to cope with demand. Staff absence levels are running a bit more than double normal sickness rates. There is very little ‘spare’ ICU capacity in the region.”

Hospitals in Cheshire and other parts of Merseyside are also seeing big rises in Covid admissions, as the resurgence of the disease makes life difficult for them with winter pressures already looming.

NHS bosses in Greater Manchester are considering opening the region’s Nightingale hospital in the city centre in the next few weeks to cope with the fast-growing influx of patients. However, it is still unclear where the staff needed will come from, because the local hospitals are already all busy. The Manchester, Harrogate and Sunderland Nightingales were all put on standby last week to reopen soon if needed in response to the problems Covid has been causing across northern England.

But Dr Nick Scriven, the immediate past president of the Society for Acute Medicine, said that finding the personnel to work in them could pose a challenge. “The big question for the Nightingales is how will they be staffed. Given the pressures on all ICU wards how can they release their staff to other units if the intention is to look after level two or three patients there? There needs to be some very clear guidance and thought put into who the Nightingales will be tasked with looking after.”

The most recent official figures showed that 196 patients were admitted to hospitals because of Covid across the north-west last Friday, up from 180 the week before. The region now has 1,785 patients in hospital with the disease, of whom 161 are on a mechanical ventilator to help them breathe.

A senior doctor in Manchester said the city’s rapid rise in Covid patients, and expectations the increase will continue as winter brings its usual payload of breathing problems, was “terrifying”.

“I’m dreading the coming months. We have rising Covid-19 numbers against a background of most places continuing to do electives [planned operations] and catching up from the first wave. Winter brings a heavy load of respiratory admissions for flu and other reasons anyway, even without Covid the wards get full to bursting,” they said.

Meanwhile, growing numbers of hospitals are considering or intending to postpone planned operations in order to free up beds and staff to deal with the second wave of Covid. They include the trusts in Liverpool, Plymouth and in the north-east.

Covid is also putting serious pressure on hospitals in Wales. Dr Ami Jones, an anaesthetist and intensive care doctor in south Wales, warned in a tweet on Saturday that while hospitals in Liverpool “are totally overwhelmed by Covid patients we are not far away from this in Wales” and that some of those affected were “fit and well young patients [in their] 30s, 40s and 50s]”.

Dr Dave Jones, another Welsh anaesthetist, tweeted that, unlike the first peak of the pandemic, the NHS was “going into wave two with trolleys in corridors and ambulances outside [hospitals]”. A third anaesthetist, Dr Tamas Szakmany used the same platform to warn that hospitals could not give patients in critical care the same standard of care as usual, including to those on a ventilator because of Covid, while also continuing to provide normal, non-Covid care, because they have too few staff.

A spokesperson for NHS England in the north-west said: “Coronavirus cases are rising and it is obviously a serious situation so it is vital everyone does what they can to control the virus.

“Social distancing is our first line of defence, followed by the test and trace programme, but if they fail to contain the spread of infection the NHS has put in place escalation plans, which are in operation, including asking Nightingale hospitals in the north, including in Manchester, to get ready to admit patients.” 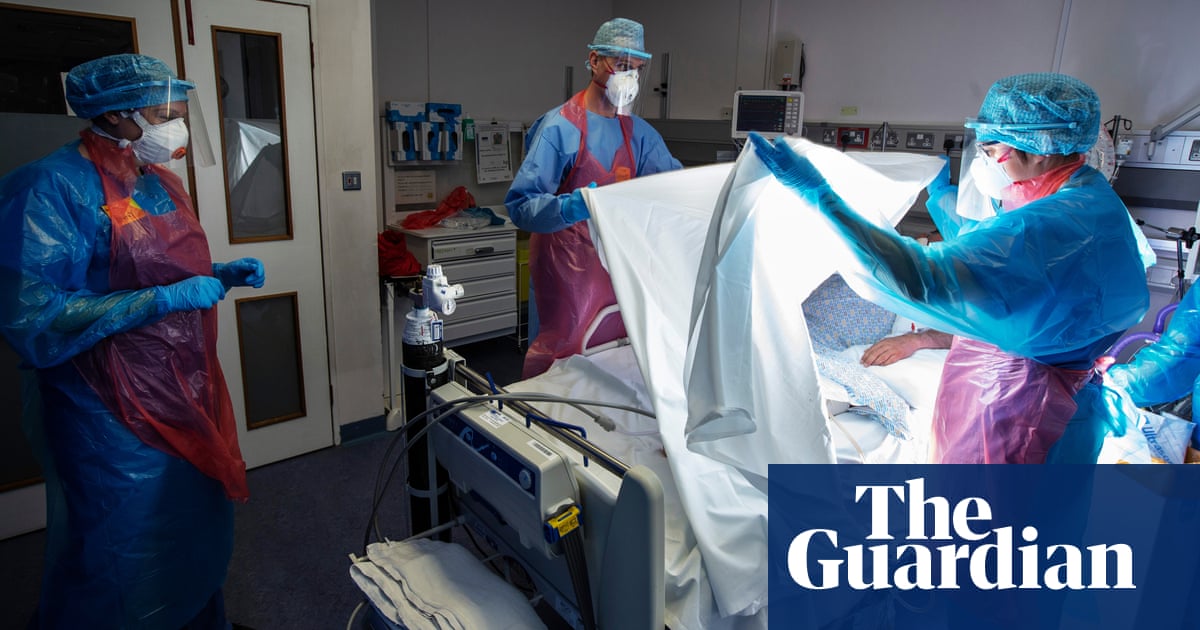