The American politicians wrote a letter to the Prime Minister today urging him to reconsider the legislation, citing ‘grave concern’ over the bill’s Northern Ireland protocol. On Monday night the controversial bill passed through the House of Commons with 340 MPs backing Mr Johnson’s changes to the Withdrawal Agreement. Three of the four congressman who wrote to Mr Johnson are Democrats.

In their letter, they told the Prime Minister they are “disturbed” by the Internal Market Bill over fears it could have “disastrous consequences for the Good Friday Agreement”, and warned the bill could see a US/UK trade deal dropped.

“If these reported plans were to go forward, it would be difficult to see how these conditions could be met.”

The congressmen also said their chief issue with the proposed bill would be how it impacts the Good Friday Agreement, signed in 1998.

Talks between then-Prime Minister John Major and Taoiseach JohnBruton were brokered and charged by US Special Envoy George Mitchell, who helped achieve the disarmament of paramilitary groups in Northern Ireland which lead to the GFA.

The letter added: “We appreciate the challenges that your country faces as it stares down the October 15th deadline for a negotiated agreement – but an Ireland divided by a hard border risks inflaming old tensions that very much still fester today and undoing decades of work that the United States, Republic of Ireland, and United Kingdom achieved together.

The congressmen concluded their letter by urging Mr Johnson to “abandon any and all legally questionable and unfair efforts to flourish the Northern Ireland protocol of the Withdrawal Agreement”.

The House of Representatives Speaker said in a statement: “Whatever form it takes, Brexit cannot be allowed to imperil the Good Friday Agreement, including the stability brought by the invisible and frictionless border between the Irish Republic and Northern Ireland.

“If the UK violates that international treaty and Brexit undermines the Good Friday accord, there will be absolutely no chance of a US-UK trade agreement passing the Congress.”

The controversial legislation passed through the House of Commons last night with a majority of 77 votes.

Ahead of the vote, Mr Johnson spoke to MPs and said the bill was “a protection, it’s a safety net, it’s in an insurance policy, and it is a very sensible measure”.

He added threats from the EU made the legislation necessary, after reports claimed the bloc threatened to prevent food exports from Great Britain to Northern Ireland.

But in 2018, Mr Trump told then-Prime Minister Theresa May a soft Brexit would have “killed” any hope of a US/UK trade deal.

During a four day visit to the UK, the US President said to the Sun: “I would have done it much differently. I actually told Theresa May how to do it, but she didn’t listen to me.”

He added: “The deal she is striking is a much different deal than the one people voted on.

“It was not the deal that was in the referendum…I know they have had a lot of resignations, so a lot of people don’t like it.” 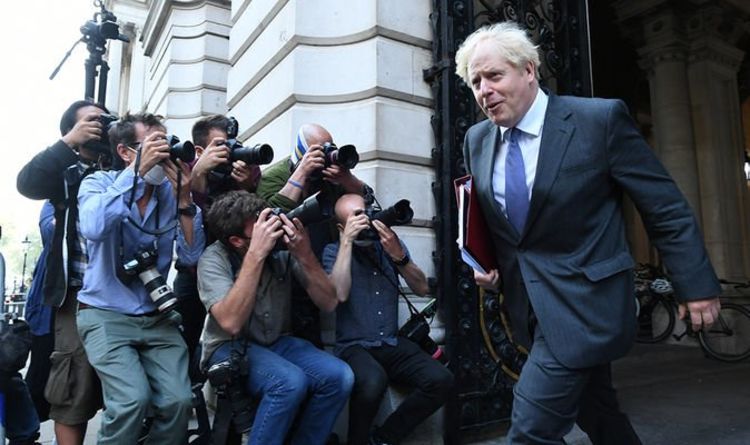