European Commission president Ursula von der Leyen furiously attacked Boris Johnson’s plan to override parts of the withdrawal agreement this afternoon. She said the UK cannot unilaterally set aside the Brexit deal, which the prime Minister agreed with the EU last October. In response to the EU’s tough stance, Express.co.uk asked its readers whether Mr Johnson should end post-Brexit trade talks with Brussels.

The vast majority of the 5,261 respondents thought the UK should walk away from the negotiations.

Readers then took to the comments to explain why they thought the UK should pull out of the talks.

One person wrote: “The trade negations should have been discontinued three months ago in favour of a WTO solution when it had become apparent that there was no satisfactory common ground available to reach agreement.

“The increasingly toxic relationship should now be carried to its logical conclusion with total repudiation of the withdrawal agreement and preparations for outright competition and a trade war.”

Another user wrote: “Allowing this to drag on serves absolutely no purpose, all it does is keep the door open for an adverse result when the best one, by far, is to walk.

“This tedious delay is like a game of Russian Roulette, except it’s only ever pointed at us, with Remainers and the EU taking turns to have another spin and pull of the trigger, in the hope that the next spin will be a loaded chamber.

A third said: “We need to walk away NOW with our heads held high to show the EU and the rest of the World this country will not be bullied or brow beaten to conform to a set on undemocratic failures who seem to think it’s okay for them to change the agreements but nobody else can.

“By walking away it will give courage and hope to other countries in the EU to do the same and end this charade call the EU once and for all.”

Another reader wrote: “The UK will be well within it’s right to walk away from the EU on WTO considering the aggressive manner of the EU.

“It’s good to see that 96 percent of the British people who took part in this poll voted to WALK AWAY, I agree with you.”

Earlier today Ms von der Leyen gave her annual State of the Union address to the European Parliament, where she chose to discuss Brexit.

She said: “This Withdrawal Agreement took three years to negotiate and we worked relentlessly on it line-by-line, word-by-word, and together we succeeded.

“The EU and the UK jointly agreed that it was the best and only way for ensuring peace on the island of Ireland and we will never backtrack on that.

News – Boris Johnson urged to end EU trade talks NOW – ‘We will not be bullied’! 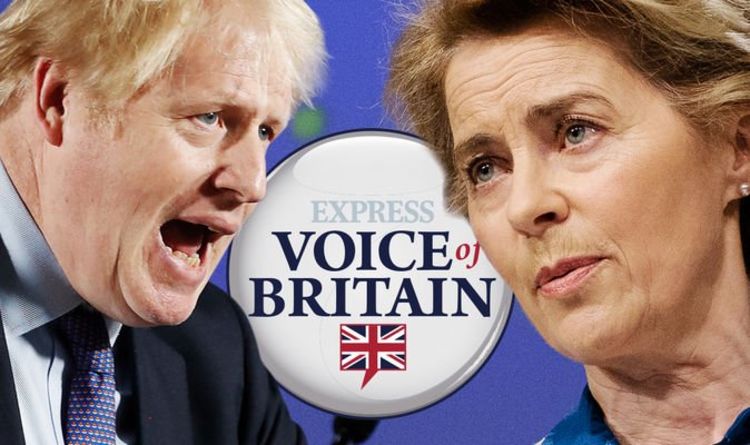