Roland Pagan on Saturday stood knee-deep in swirls of smoke on a mesa where the two-story home it took him nine years to build once offered commanding views of the desert flatlands below.

Almost exactly 24 hours earlier, Pagan, 80, stood on a nearby hill and peered through binoculars, watching his house in Juniper Hills collapse in flames.

“The ferocity of this fire was shocking,” he said, shaking his head in sadness. “It burned my house alive in just 20 minutes.”

The Bobcat fire exploded Friday amid intense winds, burning homes in the Antelope Valley and spreading in multiple directions.

As of Saturday, the fire had burned more than 93,842 acres and was threatening some desert communities along Highway 138. The fire lines stretched across 30 miles of rough terrain on the northern flanks of the San Gabriel Mountains.

Pagan was struggling to take stock of his losses and figure out what to do next.

“Holy mackerel,” he mumbled, to no one in particular as he strode through the smoldering ruins.

“It’s gonna take several days to come to grips with what just happened here,” he said. “I’m in shock.”

As he spoke, columns of smoke arose in the distance on all sides of his house, signaling property elsewhere that was catching fire.

“Yesterday and through the night, the fire made a dramatic push due to the windy conditions,” Capt. David Dantic, public information officer for the fire response effort, said Saturday morning.

Several homes in the remote foothills community were lost, Dantic said. The extent of the destruction wasn’t immediately clear.

“We’ll get a better assessment once our teams go out, but we were in an active firefight yesterday,” he said. He said firefighters were continuing to work to protect homes on Saturday.

Though the fire approached the high desert community of Valyermo, a Benedictine monastery there appeared to have escaped major damage.

The fire spread rapidly onto the desert floor Friday as winds arrived. Some residents had to flee as the fire jumped around, hitting some homes but sparing others.

Flames tore through stands of yucca and juniper, leaving behind piles of ash resembling leopard spots and transforming the landscape into a smoky wasteland.

The fire was 15% contained as of Saturday, but fire officials said they have a tough weekend ahead with hot conditions and more winds forecast.

“We are expecting another round of some pretty gusty south to southwest winds over the Bobcat fire this afternoon and into the evening hours,” said David Gomberg, meteorologist with the National Weather Service in Oxnard. The weather service was warning of an elevated fire weather threat both Saturday and Sunday due to the combination of wind and low relative humidity.

A high priority throughout the day for firefighters was monitoring the behavior of the wind, which was sporadic and ranged from stock still to rambunctious. Whenever gusts arose, there suddenly appeared more smoke in the air and more spires of dark smoke, indicating new blazes.

The fire has more than doubled in size in just a few days, growing nearly 20,000 acres from Friday to Saturday alone. Officials said the fire has been so challenging because it is burning in areas that have not burned in decades, and because the firestorms across the state have limited resources.

There are now more than 1,600 firefighters on the lines. They have relied upon helicopters and water dropping airplanes to deal with heat, erratic winds, low humidity and flames sweeping across vast swaths of inaccessible mountain terrain.

Compounding problems for firefighters trying to defend lives and property in sparsely populated areas has been what L.A. County Fire Department Capt. Sam Bashaw described as “a lack of responsibility among folks who should know better.”

“The price of living in a rural area comes with responsibility — be prepared for the worst,” he said. “Do they take that to heart? Absolutely not.”

The blaze is destroying forests and laying the groundwork for mudslides in some of the last refuges for federally endangered animals, including the southern mountain yellow-legged frog.

The fire burned through the Devil’s Punchbowl Natural Area, destroying the nature center, the Los Angeles County Department of Parks and Recreation said on Twitter. No animals or staff were hurt, and the wildlife sanctuary staff office was still standing, the department said.

Crews are trying to stop the blaze from marching east of Highway 39 and, to the west, working to protect Mt. Wilson, topped by its namesake observatory as well as numerous communication towers. Firefighters have put a containment line around part of Mt. Wilson but are “still not out of the woods” because hotspots could flare up, Dantic said.There was also concern that wind could push the fire northeast toward the Wrightwood area, which remained under an evacuation warning Saturday.

At 2:30 p.m., the eastern edges of the fire were chewing through pine and oak forests about eight miles south of the San Gabriel Mountain resort town.

The town of about 4,000 residents sits at the bottom of heavily wooded Swarthout Valley and has been threatened many times over the decades by encroaching wildfire.

As of Saturday afternoon, however, it was business as usual with tourists ringing up purchases in gift shops and restaurants.

But firefighters at the U.S. Forest Service’s century-old wood-framed visitors center, four miles south of town, were not taking any chances.

There, a crew spent much of the day encasing the historic structure’s eaves, wood shingles and exterior walls in aluminum foil to deflect windblown embers.

“Our goal is to make sure we contain the fire but fire is unpredictable and it can do anything at any point and time,” Dantic said. “We do have units strategically in place so we can stop this fire.”

He urged residents to heed evacuation orders and to be ready to leave if placed under an evacuation warning.

Residents in northern foothill communities, including portions of Juniper Hills, Devil’s Punchbowl and Paradise Springs, were placed under evacuation orders earlier in the week as flames closed in on the area.

Fire crews have made significant progress on the southern edge of the fire, which jeopardized several foothill communities, including Arcadia and Sierra Madre. Evacuation warnings for Arcadia, Sierra Madre, Monrovia, Duarte and Bradbury were lifted Saturday afternoon, but the warnings remained in place for Pasadena and Altadena.

The blaze comes in the midst of an unprecedented fire season in California, with more than 7,900 wildfires burning more than 3.5 million acres in the state since the start of the year, according to the California Department of Forestry and Fire Protection.

The fires have killed 26 people and destroyed more than 5,800 structures since mid-August, when a siege of dry lightning strikes sparked hundreds of blazes, some of which quickly spread through dry vegetation that was primed by a record-setting heat wave.

Experts say that climate change has played a role in the extreme conditions, as the gradual warming of the planet has accelerated as greenhouse gas emissions continue to rise.

Crews have nearly contained several of the lightning-sparked fires that converged into massive complexes in Northern and Central California.

Crews also reported progress against several large fires burning elsewhere in the state but said that weather conditions could pose a challenge this weekend.

The North Complex fire, which has killed 15 people and damaged or destroyed more than 1,450 structures in Butte, Plumas and Yuba counties, was at 289,951 acres and 58% contained.

Fire officials said they expected an increase in fire activity Saturday due to dropping humidity and warmer temperatures.To the south, the 22,071-acre El Dorado fire was burning in San Bernardino County along Highway 38 and in the Angelus Oaks area, officials said.

The fire broke out Sept. 7 near Yucaipa and was 59% contained Saturday, down from 66% earlier in the week. Officials said it was caused by a smoke-emitting pyrotechnic device that was part of a gender-reveal party in a park.

Flames had destroyed at least four homes and damaged two others, and the fire was continuing to threaten more than 26,000 structures. A firefighter died while fighting the blaze earlier in the week, becoming the third firefighter to die while fighting California’s wildfires this year.

You may occasionally receive promotional content from the Los Angeles Times.

Louis Sahagun is a staff writer at the Los Angeles Times. He covers issues ranging from religion, culture and the environment to crime, politics and water. He was on the team of L.A. Times writers that earned the Pulitzer Prize in public service for a series on Latinos in Southern California and the team that was a finalist in 2015 for the Pulitzer Prize in breaking news. He is a CCNMA: Latino Journalists of California board member, and author of the book, “Master of the Mysteries: the Life of Manly Palmer Hall.”

Body camera video from protests this summer shows LAPD officers yank a sign from a man and shoot him in the groin with a projectile at close range.

We need to listen to nature’s chorus about the alarming effects of climate change and act to reverse it, columnist Steve Lopez writes.

California was choked by wildfire smoke. How bad is it for our health?

California was choked by wildfire smoke. How bad is it for our health?

For weeks, millions of Californians were smothered by smoke from wildfires. Many worry about long-term health impacts. 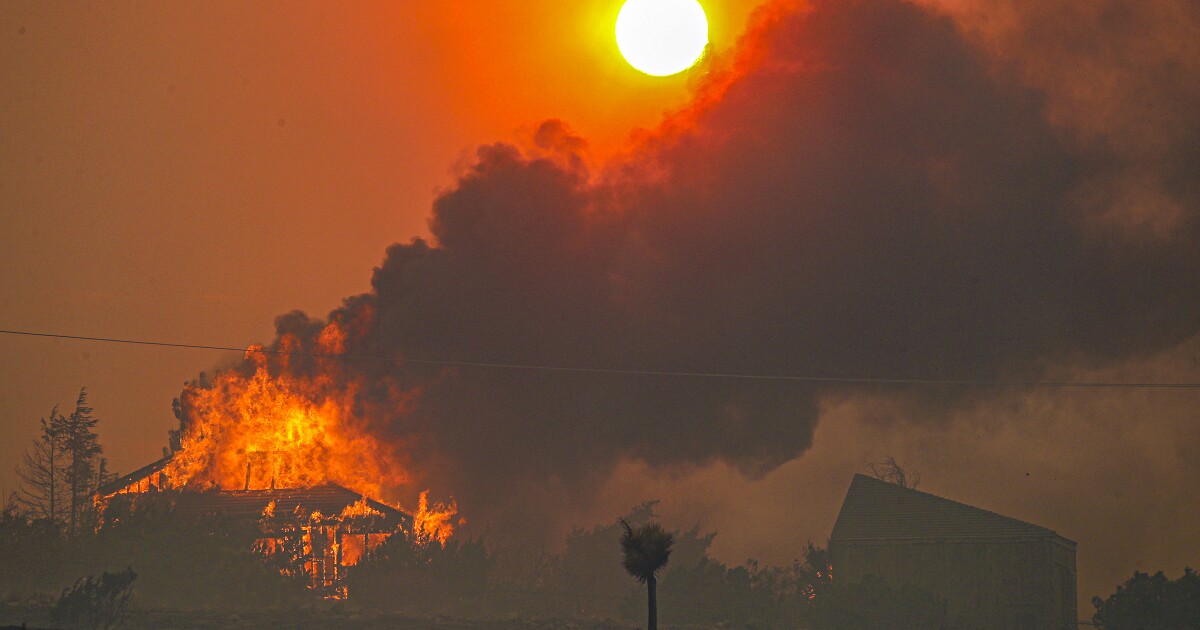 World News – USA – Ben Wallace will be inducted into the Basketball Hall of Fame class in 2021, according to report