The Tuesday announcement marks the first time the magazine has endorsed a presidential candidate in its 175-year history.

While the publication had noted President Trump’s disdain for science — calling it “frightening” — it did not endorse Hillary Clinton against him in 2016.

Scientific American’s editors explained that they felt “compelled” to back Biden due to the president’s handling of the COVID-19 pandemic and beliefs — or disbeliefs — in issues such as climate change.

“The evidence and the science show that Donald Trump has badly damaged the U.S. and its people — because he rejects evidence and science,” they wrote.

“That is why we urge you to vote for Joe Biden, who is offering fact-based plans to protect our health, our economy, and the environment,” the editors continued. “These and other proposals he has put forth can set the country back on course for a safer, more prosperous and more equitable future.”

The Trump campaign has long maintained that the administration listened to medical experts “every step of the way” to help fight the deadly virus — pointing out that travel restrictions helped save thousands of American lives.

At a town hall event broadcast on ABC Tuesday night, the president denied that he had ever “downplayed” the importance of the virus — a contrast with recently released recordings of his conversations with journalist Bob Woodward.

“Well, I didn’t downplay it. I actually, in many ways, I up-played it in terms of action,” he remarked.

Almost 200,000 Americans have been killed by the deadly disease and over 6.6 million have been infected, the highest in any nation on the planet.

While the editorial focuses on the president and his administration’s response to the novel coronavirus, editors also emphasized that the president’s shortcomings and “refusal to look at the evidence and act accordingly [extend] beyond the virus.”

“Joe Biden, in contrast, comes prepared with plans to control COVID-19, improve health care, reduce carbon emissions and restore the role of legitimate science in policymaking,” they argued. “He solicits expertise and has turned that knowledge into solid policy proposals.”

The Golden Gate Bridge at 11 a.m. Wednesday, Sept. 9, 2020, in San Francisco, amid a smoky, orange haze caused by the ongoing wildfires. (Frederic Larson via AP)

Unlike Trump, the magazine asserted, Biden would “heed the abundant research showing ways to recover from our present crises and successfully cope with future challenges.”

“Although Trump and his allies have tried to create obstacles that prevent people from casting ballots safely in November, either by mail or in person, it is crucial that we surmount them and vote,” the editors concluded. “It’s time to move Trump out and elect Biden, who has a record of following the data and being guided by science.”

On his campaign website, Biden touts a $2 trillion environmental plan, with a lofty goal of creating an emissions-free power sector by 2035. By eliminating the president’s corporate tax cuts and investing in solar and wind power, the former vice president claims he will produce 2 million new jobs for U.S. workers.

The magazine’s endorsement comes just a day after the president visited California to assess the damage from still-raging wildfires that have displaced thousands of Western residents and turned Bay Area skies a terrifying shade of burnt orange.

In a briefing with Democratic Gov. Gavin Newsom, Trump pushed back on any link between the wildfires and climate change, alleging that “it’ll start getting cooler.”

Almost 3,000 miles away, Biden said in a Delaware campaign speech that the president is a “climate arsonist.”

“Donald Trump’s climate denial may not have caused these fires and record floods and record hurricanes, but if he gets a second term, these hellish events will continue to become more common, more devastating and more deadly,” he warned. 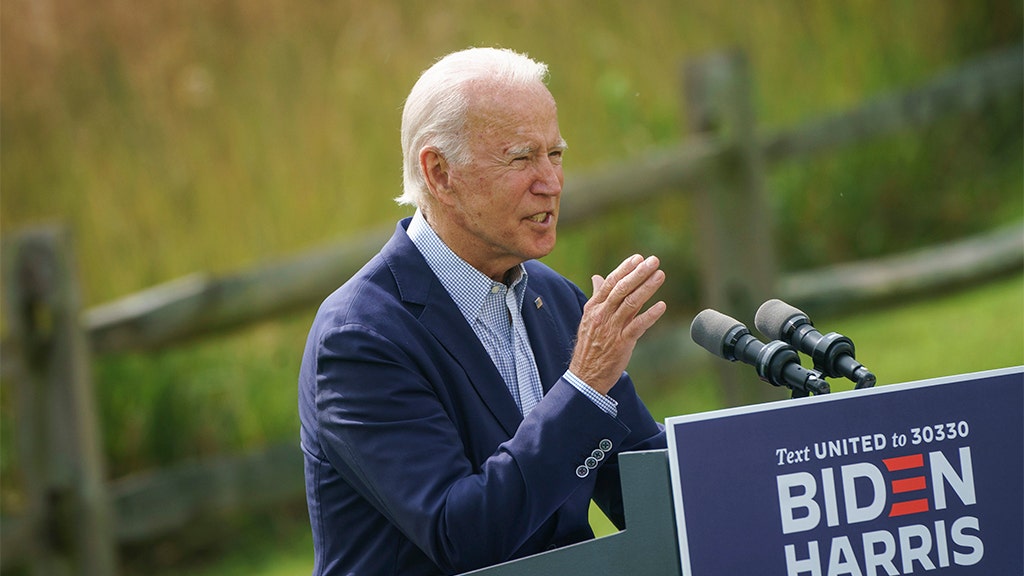