Scranton, Pa., is no longer the dying coal town of Joseph Bidenâs youth. It is more racially diverse and prosperous, and not everyone there is enthusiastic about his candidacy.

SCRANTON, Pa. â Despite it all, Gabriel Perez, the Empanada King of Scranton, is still hopeful about America.

In the first few months of the pandemic, âit was scary, business dropped for a little while,â he said. But now, more people are ordering delivery from his small shop where he has been serving steaming beef and chicken empanadas to go since 2016. Last month he invested in a renovation of his kitchen, with new equipment and a fresh coat of paint.

Mr. Perez did not vote for Donald J. Trump in 2016. He did not vote at all. But he does not dislike him. Mr. Trumpâs book âThe Art of the Dealâ gave him âguidelines for how to run my business: No matter how many times you make a mistake, just keep going.â

And while he does not think he will vote for President Trump this year, he is not sold on former Vice President Joseph R. Biden Jr. either.

âThe Democrats and Republicans are both lost,â he said a few weeks ago in his shop, a Biden ad on mute on the television on the wall. âThey are not giving solutions. They just want you to pick their side.â

In the final weeks of the campaign, Mr. Biden has made Scranton, his hometown, a major part of his closing pitch. âI really do view this campaign as a campaign between Scranton and Park Avenue,â he said at a CNN event in town last month. Embedded in Mr. Bidenâs shorthand is that he can win back the paradigmatic Scranton voter: white, working class, disaffected by Democrats.

But Scranton is no longer the dying coal town of Mr. Bidenâs youth. It is both more racially diverse and prosperous. In more than two dozen interviews the week of Mr. Bidenâs visit, few voters were particularly enthusiastic about his candidacy, despite his personal roots, but about half said they probably would vote for him anyway. Voters who abandoned the Democratic Party in 2016 said they planned to vote for Mr. Trump again this year. Some people said they were so fed up with politics that they were not going to vote at all. Others expressed annoyance at what they said was Mr. Bidenâs habit of making Scranton into a kind of blue-collar cartoon.

At the town-hall-style event, held six miles from downtown in a stadium parking lot, Mr. Biden said that not many people in Scranton owned stock.

âFrankly, it was insulting,â said Frances Keating, 74, a retired accountant who has lived in Scranton most of her life. âHeâs using Scranton as a prop.â

Scranton has become a symbol for Democratsâ lost dreams in 2016, when working-class voters abandoned the party in droves. The city itself is blue. But the surrounding county, Lackawanna, and a neighboring one, Luzerne, had the second- and third-largest swings toward Mr. Trump of any county with more than 100,000 voters in the United States. The surge was enough to cover his 44,000-vote victory in Pennsylvania.

Mr. Trump is trailing in the state by seven percentage points, but the enthusiasm he enjoys among many ancestral Democrats in Scranton highlights the challenges Mr. Biden still faces in a state regarded by both parties as a must-win next month.

Kim Anzelmi, a former meat inspector, was watching television after dinner in a suburb of Scranton last month when Mr. Biden flashed on the screen.

Ms. Anzelmi scoffed. She said that she was tired of hearing from progressives that she had privilege because she was white and that she feared a Biden presidency would only give them more power.

âI put myself through college,â said Ms. Anzelmi, who is 55 and whose vote for Mr. Trump in 2016 was the first she had ever cast for president. âI was a security guard at Sears. I worked in meat plants where I was the only woman. Now you tell me Iâm entitled?â

That Mr. Biden is from this area did not matter. Ms. Anzelmi plans to vote for Mr. Trump again. But in a sign of how complicated politics have become within families, her husband â an immigrant from Uruguay who got his citizenship in 2009 but has never voted â likes Mr. Biden and said he thought he might vote for him.

Mr. Trump âis crazy,â he said, sitting in an armchair near his wife. âHe speaks too much.â

A saw-shaped spot on the map whose coal mines drew immigrants from Europe in the 19th and early 20th centuries, Scranton has a population that peaked in the 1930s and declined sharply in the following decades.

In the early 2000s, the economy began to pick up. Located at the intersection of several major Interstate highways, logistics companies and warehouses began to open up. The economic engines that powered revivals in places like Pittsburgh â education and health care â have grown too. Colleges have expanded dramatically. A new medical school has opened.

Demographics have changed too. Hispanics are now about 14 percent of the population in Scranton. In Hazleton, a city in Luzerne County, they make up more than half. Scranton now has two Hindu temples and Indian grocery stores that serve South Asians working in the hospitals and at a nearby T.J. Maxx warehouse.

The day after Mr. Bidenâs visit, Dipen Vyas was standing outside his Indian food supply store with two friends. All of them were Indian immigrant business owners and all had voted for Mr. Trump in 2016. They liked that he was a businessman, and that he had promised to be tough on illegal immigration.

But they could not decide whether to vote for Mr. Trump again. On the one hand, Indians who had been waiting years for permanent residence were now being rejected. On the other, the president seemed to have struck up a strong relationship with Prime Minister Narendra Modi of India. But they liked Mr. Biden too. He was from Scranton. And he had already been vice president, so he knew the ropes.

On Scrantonâs South Side, where new arrivals from Mexico, Central America and the Caribbean are now moving into houses that used to belong to immigrants from Southern and Eastern Europe, Mr. Perez at the empanada shop, Papiâs Kitchen, was reflecting on the political decision before him.

In 2016, Mr. Perez preferred Bernie Sanders. Health care for everyone and free tuition made sense to him. But he did not vote after Mr. Sanders lost the Democratic nomination. That year, he opened his empanada shop in what used to be a pizza takeout place.

Now the Democratsâ main pitch seems to be to get rid of Mr. Trump. But Mr. Perez, 45, did not feel very excited by that.

âI didnât come from a great background, but for me to be where I am today, thatâs America,â said Mr. Perez, who grew up in a working-class Puerto Rican family in Newark but said he sometimes felt that Democrats reduced him to his ethnic background.

âItâs not really even about Biden,â said Eddie Franklin, who, together with other Trump supporters, was parked by the side of the road that led to Mr. Bidenâs event. What worried him was how weak Mr. Biden seemed, and how that might allow less moderate Democrats to take over.

Mr. Franklin, 68, who works in a car lot, said that he came from a long line of coal miners who were Democrats, but that the party had moved too far left. A sign saying, âDemocrat never again, my eyes are open,â was taped to his back window.

âTrump people really believe in him. Theyâre not like, âIâm voting for Trump because heâs a Republican.ââ

The largest concentration of Biden yard signs was in the Green Ridge neighborhood, where Mr. Biden grew up, which includes large stately houses with awnings and wide porches.

âJoe Biden is the best shot that Scranton has ever really had in my lifetime,â said Joseph Corcoran, a former county commissioner who grew up in an Irish-American family about 12 blocks from Mr. Bidenâs house.

But liking Mr. Biden did not always translate into voting. A worker at Hankâs Hoagies, a sandwich shop a few blocks from Mr. Bidenâs childhood house, said he liked Mr. Biden but had not voted for president since 2004 and did not think he would this time either. Politicians âare just so corrupt,â he said. That cynicism has settled deeply in Scranton. This month, the former mayor, a Democrat, was sentenced to seven years for extorting contractors, part of a long line of public corruption scandals in the area.

Turnout is what worried Michael McDermott, the business manager at International Brotherhood of Electrical Workers Local No. 81. Not enough union members voted in 2016 to keep Mr. Trump from winning Pennsylvania.

âTrumpâs numbers arenât going to change that much,â he said. âWhat we need is for our numbers to change.â

He predicted that many who did not turn out in 2016 would show up for Mr. Biden this year. Still, he is worried.

News – Biden Says He Gets Places Like Scranton. Some in Town Arenât So Sure. 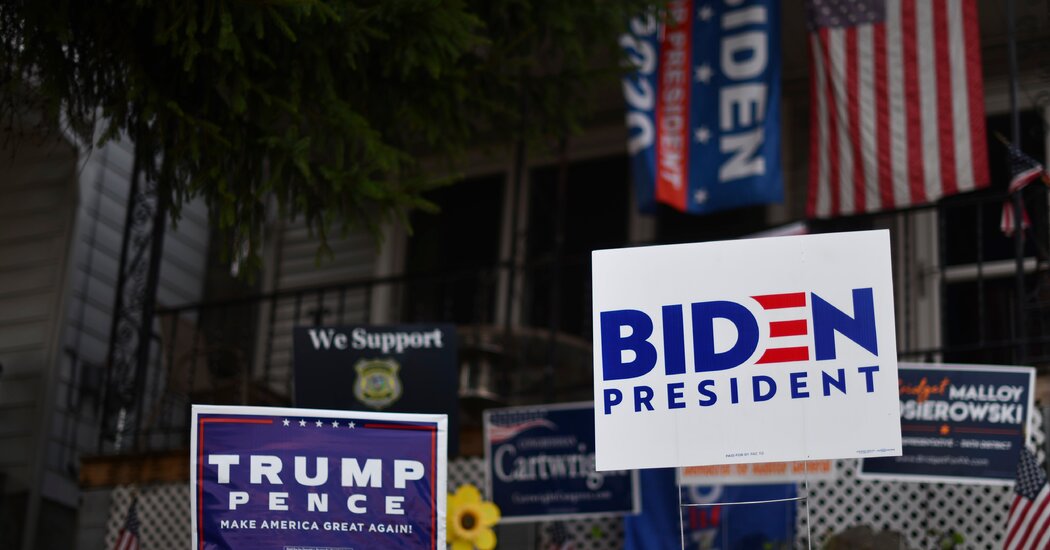