Joe Biden was at a loss for words Wednesday night when he was asked how he felt about Donald Trump refusing to vow to leave office peacefully if he lost the election in November.

‘I’m being facetious,’ he clarified. ‘I said, what country are we in? Look, he says the most irrational things. I don’t know what to say.’

President Trump was asked Wednesday during a press conference at the White House if he would peacefully transfer power after the November election. He declined to make such a commitment.

‘Well, we’ll have to see what happens,’ said Trump, when pressed on the matter at the White House.

Independent Senator Angus King weighed in on the comments Thursday morning, claiming they are ‘incredibly dangerous’ and an ‘invitation to violence.’

‘Peaceful transfer of power is really at the essence of who we are as a country,’ King told CNN’s ‘New Day.’

‘What country are we in? Look, he says the most irrational things. I don’t know what to say,’ Biden said to reporters

‘Get rid of the ballots and you’ll have a very peaceful – there won’t be a transfer frankly, there’ll be a continuation,’ President Donald Trump said, in a likely reference to mail-in ballots

‘For him to say what he did last night is – ‘chilling’ is too mild a word,’ he continued. ‘Apparently holding onto power is the only thing [on Trump’s mind].’

King admitted that on Election Night there will not be a ‘final count’ due to mass mail-in voting measures implemented to accommodate those affected by the coronavirus pandemic.

After refusing to go along with a pledge, the president attacked Democrats and delivered swipes that appeared to be directed at mail-in voting, the subject of his frequent attacks at the White House and at campaign rallies.

‘Win lose or draw in this election will you commit here today for a peaceful transferal of power after the election?’ Trump was asked at the top of his press briefing.

‘Well, we’ll have to see what happens,’ Trump replied – entertaining the question, but also refusing to commit.

His questioner pointed to ‘rioting’ in U.S. cities, and asked if Trump would commit to making sure there is a peaceful transfer of power after the election.

‘You know that. I’ve been complaining very strongly about the ballots. And the ballots are a disaster,’ he said, in a likely reference to mail-in ballots. Trump regularly says they are rife with fraud, although a handful of states use them for elections.

‘Get rid of the ballots and you’ll have a very peaceful – there won’t be a transfer frankly, there’ll be a continuation,’ Trump said.

He continued: ‘The ballots are out of control. You know if. And you know who knows it better than anybody else, the Democrats,’ he said.

The president quickly moved on to other questions about the coronavirus and charges for an officer involved in the shooting of Breonna Taylor in Kentucky.

A man wears a shirt supporting U.S. President Donald Trump while waiting in a socially distant line to vote on the first day of early voting for the 2020 U.S. presidential election at the Fairfax County Government Center in Fairfax, Virginia, U.S., September 18, 2020

The president’s dodge came on a day when the Atlantic published an article titled The Election that Could Break America that played out scenarios where Trump would refuse to accept results amid court cases and recounts, and rejects the outcome even if rival Joe Biden appears to have won or be within sight of prevailing in the Electoral College.

The president made the comment as some of his fiercest critics have accused him of making moves toward authoritarianism. Biden said this summer trump will ‘try to steal’ but said he is convinced the military ‘will escort him from the White House with great dispatch.’

The president faces the backdrop of ongoing investigations by prosecutors in New York that could implicate the president if he were to leave office.

On Wednesday, a New York judge ruled that Eric Trump must comply with a subpoena in a probe that extends to Trump Organization statements when obtaining financing for projects.

Trump concluded the briefing saying he had to take an ’emergency phone call’ and turned the podium over to coronavirus advisor Dr. Scott Atlas.

News – Biden as Trump won’t commit to transition: ‘What country are we in?’ 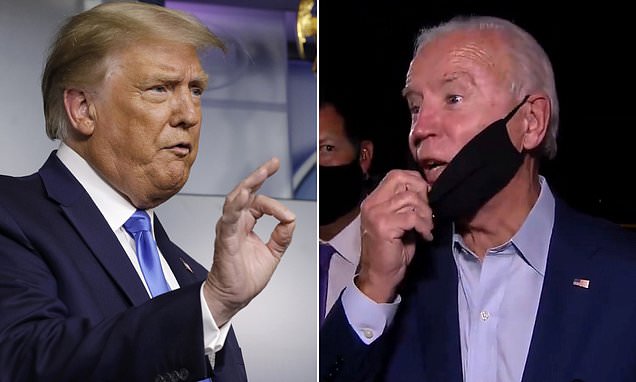