The attorney general’s remarks scanned as a rebuke of career Justice Department lawyers who have questioned his level of involvement.

ARLINGTON, Va. — Attorney General William P. Barr said on Wednesday that as the nation’s top law enforcement official, he had the right to intervene in investigations and to overrule career lawyers, castigating his own department and attacking what he described as politically motivated inquiries.

Speaking at an event hosted by Hillsdale College, Mr. Barr delivered remarks that scanned as a rebuke of career Justice Department lawyers who have questioned his level of involvement — a management style in which he has cast himself as the ultimate authority on almost every issue that the department faces, including antitrust settlements, criminal prosecutions and civil litigation.

“Because I am ultimately accountable for every decision the department makes, I have an obligation to ensure we make the correct ones,” he said.

For months, Mr. Barr has been accused of politicizing the Justice Department, particularly by interfering in legal matters that benefit President Trump or his allies. In February, Mr. Barr overrode a sentencing recommendation for Mr. Trump’s longtime friend and ally Roger J. Stone Jr. with a more lenient one. And in May, he directed the Washington federal prosecutor’s office to withdraw the government’s case against Michael T. Flynn, the president’s first national security adviser, who twice pleaded guilty to lying to the F.B.I.

Reflecting widespread concerns among rank-and-file lawyers, a former department prosecutor said in an op-ed article that the Stone and Flynn interventions would inflict “lasting damage to the institution” and that “the department again put political patronage ahead of its commitment to the rule of law.”

But in his speech on Wednesday night, Mr. Barr said that it was well within his power as the attorney general to be the final arbiter in all cases before the Justice Department. While that assertion is technically true, past attorneys general have typically let the deputy attorney general run the day-to-day matters of the department and have even distanced themselves from politically fraught issues.

Mr. Barr also said that it was his job to push back on career lawyers and make important judgment calls because those prosecutors were too narrowly focused or too inexperienced to know how best to handle delicate cases.

“Letting the most junior members set the agenda might be a good philosophy for a Montessori preschool, but it is no way to run a federal agency,” he said.

While Mr. Barr did not mention the Flynn or Stone cases by name, he said that following the letter of the law and the spirit of fairness sometimes meant “investing months or years in an investigation and then concluding it without criminal charges.”

“Other times,” he said, “it will mean aggressively prosecuting a person through trial and then recommending a lenient sentence, perhaps even one with no incarceration.”

Mr. Barr also alluded to his past statements that the investigation into Russia interference in the 2016 election had been improperly initiated by career department employees who could not accept the results of the race. That assertion has been disproved by a Republican-led Senate intelligence panel and the Justice Department’s inspector general.

“I’d like to be able to say that we don’t see headhunting at the Department of Justice, but that would not be truthful,” Mr. Barr said. “It is a temptation sometimes to go after people rather than crimes.”

“Advocating for clear and defined prohibitions will sometimes mean we cannot bring charges against someone whom we believe engaged in questionable conduct,” he said. “But that is what it means to have a government of laws and not of men. We cannot let our desire to prosecute ‘bad’ people turn us into the functional equivalent of the mad emperor Caligula.” 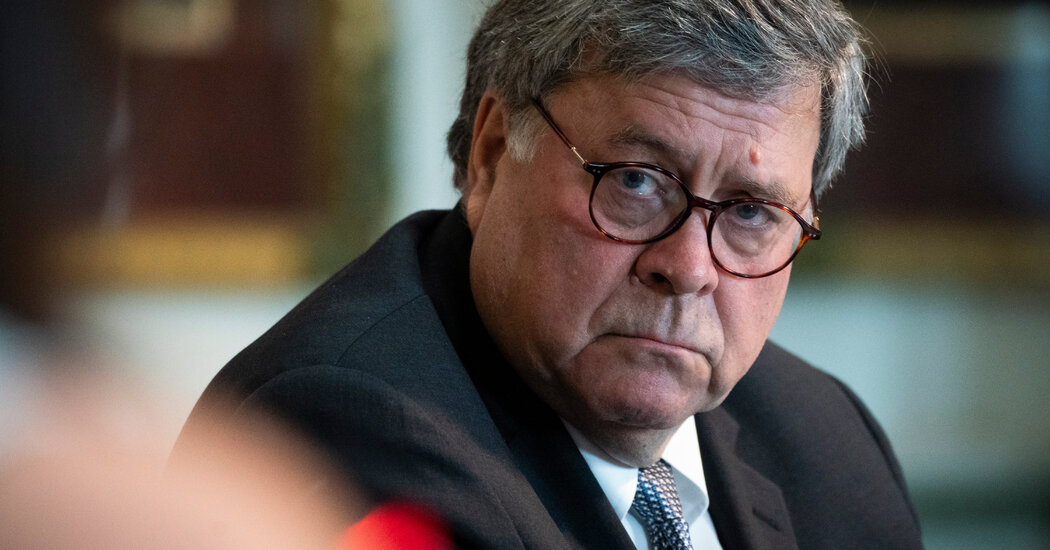