“Bad things can happen, but it’s not the end of the world. We get to choose when something negative happens, do we let it destroy us or do we let it make us a stronger person?”

A woman who survived being kidnapped by a serial killer when she was 15 years old is inspiring hundreds of thousands of people on TikTok, where she has been sharing her story and advice on dealing with trauma and how to help victims.

On June 24, 2002, Kara Robinson Chamberlain, then 15, was at a friend’s house. The teens had planned to head out to a lake for the day, she told Elizabeth Smart in a 2018 interview with CrimeWatch Daily, but first, her friend’s mother asked if the teens could water her flowers on the front lawn.

Chamberlain offered to do so while her friend took a shower, and was alone when a strange man pulled into the driveway. After asking if he could hand her some brochures, the stranger put a gun to Chamberlain’s neck and forced her into his vehicle, she told Smart.

The man, Richard Evonitz, put Chamberlain in the back of his car in a container. He took her to his apartment and held her captive for 18 hours, according to the FBI, and sexually assaulted her repeatedly.

As Chamberlain told Smart, during her ordeal she focused on trying to study her attacker and plan her escape. While her attacker slept, Chamberlain wiggled out of her restraints, and ran out the front door. She flagged down a motorist, who took her to the Richland County Sheriff’s Department.

Chamberlain later learned she had survived a serial killer. Evonitz fled to Sarasota, Florida, where he died by suicide after being surrounded by police. After his death, the FBI states that investigators found evidence that led them to identify Evonitz as the killer of three girls.

The first victim, 16-year-old Sofia Silva, was abducted from the front steps of her home in Virginia on September 9, 1996, and her body was found in a pond five weeks later, the Washington Post reported at the time. Seven months later, Evonitz kidnapped and murdered sisters Kristin and Kati Lisk. The sisters, 15 and 12 at the time, vanished from their home on May 1, 1997, and their bodies were found in a river five days later.

An unidentified FBI agent kneels by the grave of the Lisk sisters, Tuesday, Aug. 13, 2002.

After her ordeal, Chamberlain not only survived, but thrived. In the summer of 2003, she began working with the Richland County Sheriff’s Department in victim’s services and in the DNA lab through the end of high school and college, and after her graduation, decided to go to the police academy to become a school resource officer. During her career, Chamberlain investigated sexual assault and child abuse cases and went back into victim’s services.

After leaving law enforcement to stay at home with her two young sons, Chamberlain decided she wanted to pursue a career in motivational speaking to share her stories and inspire others. After doing the interview with Smart, Chamberlain joined five other survivors of kidnapping and sexual abuse, including Smart, Gina DeJesus, and Katie Beers, for a Lifetime special called “Smart Justice.”

Chamberlain told BuzzFeed News the experience was “empowering,” and said it inspired her to continue to share her story.

“That helped me realize how much power we as women can have when we speak our truths, and we share and we empower people,” she said.

Chamberlain is working on a documentary to share her story, but also has been working to get her speaking career off the ground. But many of the speeches she gave to law enforcement were not taped, so she didn’t have a lot of material to show what she could do. She decided to see if she could build a following on social media, and that’s when she started her TikTok.

She started filming videos, sharing her story and answering questions about how to support trauma survivors, her views on law enforcement, and more. After participating in her first “challenge” video, Chamberlain had her first viral hit.

But it was her next video, where Chamberlain tells a story from her time at the police academy, that put Chamberlain on the map.

Chamberlain explains in the video that she was sitting in class at the police academy when her instructor began to teach a lesson…about her case. The video now has nearly 3 million views.

She said in the video that she, the only woman in her class, got an award and a standing ovation at her graduation. Chamberlain said she got nothing but support after she told her classmates and instructor that she was the “Kara” in the story.

“They all kind of surrounded me with support and love, like ‘wow, we are so proud of you,'” she told BuzzFeed News. “So it was a very supportive environment for me to be in…I didn’t really feel any different than anyone else would have.”

Chamberlain now has more than 157,000 followers on TikTok. Since her viral videos, she has covered topics like PTSD and dealing with stress and trauma.

She also answers questions from followers, including a video where she discusses how to escape if you are restrained.

Her background in law enforcement, Chamberlain said, helps her have a unique perspective on her trauma, and helps her connect with a large number of people. She also has answered messages from sexual assault nurses and law enforcement about how to best support trauma victims.

Chamberlain said that the support and response to her videos has been “astounding.” One girl who messaged her, she said, later revealed to her that she was being sex trafficked, and Chamberlain has worked with her to try and get out of that situation.

Another connection she made through TikTok is with the family of a K-9 officer who helped to apprehend Evonitz in Florida in 2002. The officer has since passed away, but Chamberlain has been able to talk with his widow, who told Chamberlain that her story had made a huge impact on her husband’s life.

“Contacts like that that I’ve been able to make of people who were connected to the case in ways, I never would have found them otherwise,” she said.

Chamberlain said she is thankful that she found her community on TikTok, and hopes to use her platform to continue to inspire and help others.

“Bad things can happen, but it’s not the end of the world,” she said. “We get to choose when something negative happens, do we let it destroy us or do we let it make us a stronger person?”

Stephanie McNeal is a social news editor for BuzzFeed News and is based in New York. 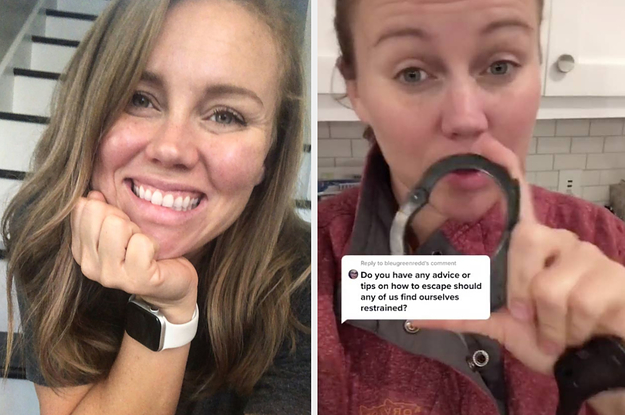