Rep. Clay Higgins has spoken at events organized by militia groups. When a rumor spread of a Black militia group protesting police brutality, he said their armed presence would be considered a threat and he’d “drop any 10 of you where you stand.”

Facebook removed two posts from a Republican member of Congress representing Louisiana on Tuesday in which he threatened demonstrators against police violence, suggesting he would shoot and “drop any 10 of you where you stand” if they took to the street armed.

“If this shows up, we’ll consider the armed presence a real threat,” Rep. Clay Higgins, a former law enforcement officer, posted Tuesday on his personal, verified Captain Clay Higgins Facebook page along with a picture of an armed Black militia group that has protested the police killings of Breonna Taylor and George Floyd. “We don’t care what color you are. We don’t care if you’re left or right. If you show up like this, if We recognize threat… you won’t walk away.”

Higgins, a vocal advocate for gun rights who was elected to Congress in 2016 and who has been featured in NRA promotional videos, made no reference to protesters turning violent, but instead suggested their mere armed presence would be considered a threat.

“I wouldn’t even spill my beer. … We are SWAT. Nothing personal. We just eliminate the threat. … That’s not a challenge, fellas. It’s a promise,” he wrote Tuesday.

Louisiana is an open-carry state, meaning a permit is not required for someone to visibly carry a firearm in public.

Higgins has also touted himself as a strong advocate for the Second Amendment. One of his political ads started with him wearing a SWAT vest, shooting a rifle, and telling the viewer to “tell the world we’re American.”

“You’re the ones threatening, if you show yourselves, aggressively natured and armed in my presence,” he wrote in his now-deleted post. “We don’t want to see your worthless ass nor do we want to make your Mothers cry.”

Higgins did not explicitly threaten to shoot protesters, but seemed to make reference to it in his post by writing “1,450 fps” – a reference to the speed of some ammo measured by feet per second.

A spokesperson for Facebook told BuzzFeed News Tuesday night that the lawmaker’s post had been removed for breaking its violence and incitement policies, which state that content is removed if it “incites or facilitates serious violence.”

Higgins’ post had featured a picture of masked protesters raising a fist in the air and who did not appear to be visibly armed, as well as a second picture of a Black militia group called the Not Fucking Around Coalition, or NFAC. Its members have appeared heavily armed in bulletproof vests at protests against police brutality, including the killing of Taylor in Louisville. The group has challenged white supremacist groups, including the KKK, into confrontations and has called for the removal of Confederate monuments.

The lawmaker’s post was made after a rumor began circling on social media that members of the NFAC would be appearing in Lafayette, Louisiana. The group did not ultimately appear.

However, both KATC and the Advocate reported that at Tuesday night’s Black Lives Matter protest at Layfayette City Hall, it was actually a right-wing militia who showed up “heavily armed.” The Advocate reported that 40 to 50 members of the Louisiana Cajun Militia attended the demonstration. The group posted pictures of its members in bulletproof vests and camouflage gear and armed with long guns outside the government building.

Higgins has made no mention of that armed group in his social media accounts and his office did not respond to multiple requests for comment about his posts or the militia’s presence at Tuesday’s protest. But the lawmaker has shown no qualms in the past about appearing alongside and speaking at events organized by other mostly white militia groups.

On July 29, 2017, Higgins appeared at a DC event organized by Oath Keepers, a group that claims to have tens of thousands of members and has been described by the Southern Poverty Law Center as a radical anti-government group.

Although leaders of the group contend it is not a militia, the group has acted and launched “operations” similar to a paramilitary force. Members of other militia groups were invited and attended the event.

The Advocate has also reported the Louisiana Republican has sold shirts at his political events with logos identical to that of the Three Percenters, another set of anti-government militia groups scattered across the country.

After his original post was taken down Tuesday night, Higgins followed up on Facebook saying he had not deleted the post himself, suggested he was being censored, and continued to encourage people to respond to protesters. “America is being manipulated into a new era of government control. Your liberty is threatened from within. Welcome to the front lines, Ladies and Gentlemen. … I’ll advise when it’s time gear up, mount up, and roll out,” he wrote.

That post was removed on Wednesday evening after BuzzFeed News asked whether it also went against the platform’s policies. The Facebook spokesperson said the second post also violated “our policies against inciting violence.”

Rob Anderson, a Democrat running against Higgins in 2020, said in a statement that his campaign informed local, state, and federal law enforcement about Higgins’ posts and also contacted Republican and Democratic leadership in Congress.

“No elected official in this nation in any office should be responsible for drumming up violence where there is no violence,” Anderson said. “To do so is literally to break the oath he took to preserve, protect, and defend the constitution. … What Congressman Higgins has done with his words inciting violence is to rally those who believe his words to arm themselves, and come into our district looking for war. This is absolutely the most reckless, negligent, and irresponsible thing a public official could do. If he had a shred of dignity, he would resign.”

Representatives for House Speaker Nancy Pelosi and House Minority Leader Kevin McCarthy did not respond for requests for comment on Higgins’ posts.

The posts come, and were removed, as protests continue across the country against the killing of Black people by police, and as these demonstrations are increasingly met by opposing, sometimes armed counterprotesters with deadly results.

In Kenosha, a 17-year-old was charged with shooting and killing two people during a protest against the shooting of Jacob Blake, a Black man shot seven times in the back by a white police officer. In Portland, Oregon, a man who appeared to be with a right-wing group was killed this weekend.

Higgins is a former law enforcement officer and was a member of a SWAT team. He resigned from the Opelousas Police Department in 2007 after an internal investigation accused him of using unnecessary force on a suspect (he has since denied that was the reason for his resignation).

Higgins later went viral for a series of “tough on crime” videos he made during his time at the St. Landry Parish Sheriff’s office for its Crime Stoppers program. In the videos, Higgins often addressed people accused of crimes directly, mocking them and asking them to turn themselves in, or threatened to take them down himself, referring to members of a gang in one video as “animals” and “thugs,” for example. He earned himself the nickname “Cajun John Wayne” for his delivery and he resigned in 2016 after the St. Landry Sheriff and the ACLU criticized his videos.

Just a few months after he resigned, Higgins announced a campaign for Congress and won. Just six months into his first term, Higgins posted a video from inside a gas chamber at Auschwitz, saying that the US needs to be prepared because it is now “more accessible to terror like this, horror like this.” Higgins took down the video after the Auschwitz Memorial Museum criticized it and said that the gas chambers are not a “stage.” 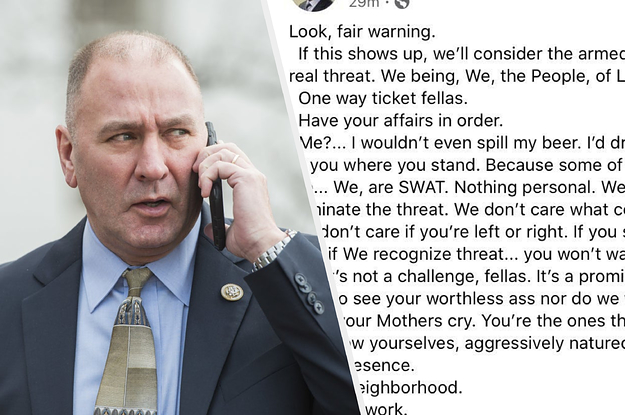