A clash between motorists and so-called squeegee kids in Baltimore quickly spread on Twitter after a respected doctor falsely described it as an attack by Black Lives Matter protesters.

“My daughter called in tears,” wrote Andrea Natale, a world-recognized heart doctor based in Texas, on Sunday. “She was driving [with] her boyfriend in Baltimore & their car was attacked by a group of BLM. It was damaged & her BF was beaten.”

“She filmed it & called the police but they cannot do anything [because] they are African American,” he wrote. “Is this the America we want?”

The Italian-born doctor soon began retweeting some of the hundreds of replies he received as his tweet went viral.

First, the doctor’s adult daughter and her boyfriend were not attacked by a crowd of violent Black Lives Matter protesters. Instead, as police body camera footage provided to BuzzFeed News showed, they told officers they were involved in a confrontation with so-called “squeegee kids” — a term used to describe the groups of young, predominantly Black men and teen boys who approach cars at intersections in order to wash their windshields and make money.

Second, the daughter’s boyfriend was not beaten. “There wasn’t any physical touching on me or them,” the young man can be heard telling the responding officer in the body camera footage.

And, third, the police most certainly did not tell the young couple that their hands were tied because the alleged offenders were Black.

It took Natale more than a day to take down the false tweet and more than two days to apologize, admitting he had “jumped to conclusions” based on the information he had gleaned from speaking to his upset daughter

But by that point the damage was done: Natale’s tweet had already been seen by hundreds of thousands of people, and was retweeted by more than 18,000 different accounts on Twitter.

As President Donald Trump campaigns on a message of so-called law and order, denouncing what he has portrayed as anarchic violence in cities like Baltimore that, he points out are “run by Democrats,” Natale’s tweet was seized upon by opponents of Black Lives Matter as proof that out-of-control protesters were violently threatening peaceful bystanders. Many on the far-right attempt to link a movement that calls for ending systemic racism and police killing Black people with any sort of violence — real or perceived — in an effort to polarize people against each other for political gain.

But many others on Twitter did question the viral claims in Natale’s tweet and demanded video evidence — to the evident anger of the doctor. “I trust my daughter and do not need to see a stupid video,” Natale told one man who questioned his story. “You are all delusional. I talked to her right after this happened and she was crying and visibly shaken and full of dear. This is enough for me. Again this is not about politics, but just about criminals.”

Natale boasts an extensive resume that may have appeared to some users to add credibility to his viral claims. In addition to his position as the executive medical director at the Texas Cardiac Arrhythmia Institute at St. David’s Medical Center in Austin (which is listed in his Twitter bio), he has previously worked at the Cleveland Clinic and held faculty positions at Duke University and Stanford University. “Patients from around the world seek treatment from Dr. Natale,” reads his profile on the Texas Cardiac Arrhythmia Institute website. “A world recognized leader in the field of electrophysiology, Dr. Natale is a dedicated clinician, academician, and researcher.”

BuzzFeed News first contacted Natale, his daughter, and her boyfriend on Monday but received no response.

Then, a Twitter user who declined to be identified in this story shared audio in response to Natale’s tweet of a police dispatch call making clear the incident involved squeegee kids, not Black Lives Matter protesters.

On Tuesday afternoon, after multiple requests for comment, representatives from his hospital passed on an apology from Natale to BuzzFeed News:

I sincerely apologize for a tweet I posted this weekend. I was worried about my daughter, and I jumped to a conclusion based on the information I had at the time. I’ve dedicated my entire professional career to healing people from all backgrounds, and I regret that my words were misinterpreted and created hurt and pain. It was not my intention.

The body camera footage, provided to BuzzFed News but first published Tuesday evening by the Baltimore Sun, did show Natale’s daughter was visibly distressed after the incident. She and her boyfriend — both of whom BuzzFeed News are not naming because they are claiming to have been the victims of a crime — recounted to responding officers how they had stopped in his car at the intersection of Lombard and President in downtown Baltimore when they were approached by the squeegee kids.

The young man said he exited his car after they told the squeegee boys to stop washing his windshield, only for him to be surrounded by three of them. “I said, ‘Stop, I will defend myself. I do have a knife on me,’” the man recounted.

“And the other guy pulled out his knife and was like, I’ve got a fucking knife, too!’”

But then some other squeegee boys threw “rocks or coins” at the vehicle, damaging a side mirror.

The responding officer wrote them a complaint number for destruction of property. “I’m sorry this happened. It happens every single day,” the officer said.

“To be honest, the city doesn’t want us to engage with squeegee boys,” he told the couple. “And we’ve got our hands tied.”

A squeegee kid working in Baltimore in April while wearing a face mask to protect himself from the coronavirus.

Squeegee kids have been present in Baltimore for more than 30 years. They’re mostly regarded as enterprising young people looking to earn money — one 21-year-old told KHN in June that he took to squeegeeing windows to make basic living expenses because he was laid off from his restaurant job amid the pandemic.

Critics of the kids have compared them to aggressive panhandlers who are endangering their lives while harassing motorists. Last October, the Baltimore Sun newspaper declared the squeegee kids debate had reached a “dangerous level” after a woman driver flashed her gun on a group she said were being aggressive, only for one of them to reach inside her car, sparking a commotion that led to the gun firing.

According to Baltimore magazine, legislative steps first taken in 1985 to crack down on the practice led to a “hot, racialized debate” about low-income kids that continues to this day. Instead of trying to arrest the kids, officials have instead made efforts to get them off the streets through social programs.

It is — as the responding officer explained to the doctor’s daughter and her boyfriend — illegal to stand in the middle of a street in Baltimore, but it’s not a crime that can result in any prison time. City codes also ban aggressive soliciting in public or on the street, but as the Baltimore Sun noted, such laws also apply to people selling bottled water or raising money for sports teams.

As the responding officer told the couple on Sunday, the damage to their side mirror could constitute destruction of property, but he could not arrest anyone for a misdemeanor offense that he didn’t witness himself.

“So what can we do about it?” the boyfriend of the doctor’s daughter could be heard asking the officer in his body cam footage.

But rather than tell the couple he was powerless and could take no action because the kids were Black — as Natale claimed — he instead ended his interaction with the pair by saying he would try to locate “the kid” suspected of damaging their car.

“If I do,” he said, “I’ll give you a call back and you can go file charges against that kid.”

David Mack is a deputy director of breaking news for BuzzFeed News and is based in New York.

News – A Doctor Went Viral For Saying His Daughter Was Attacked By BLM. She Wasn’t. 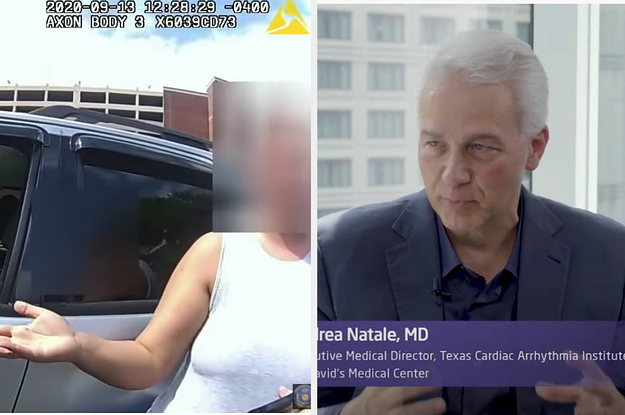