From afar, New York City’s outdoor dining program has looked like a hit. Seemingly overnight, restaurant rows sprang up on sidewalks and streets, and patrons at some establishments encountered long wait times for socially distanced tables and a bustling atmosphere.

But a report released this week by the New York City Hospitality Alliance tells a different story: In a survey of more than 450 restaurants, bars and nightclubs, all but a few dozen said they could not pay their full August rent.

Soon, restaurateurs will be able to offer some indoor dining and perhaps add a coronavirus surcharge to patrons’ bills. Still, the report is telling, and worries over a major lifeline in the city are looming large.

The city’s outdoor dining program and federal financial aid have not been much more than a bandage during the coronavirus crisis, my colleague Sharon Otterman has reported.

Less than half of restaurants and bars are taking part in outdoor dining, according to Mr. Rigie. And Ms. Otterman found that even establishments with sidewalk tables and canopies were operating at a fraction of their seating capacity,

Outdoor dining is now scheduled to last until Oct. 31, and it isn’t clear whether the program will be extended. Mayor Bill de Blasio said on Tuesday that there would be an announcement about the program next week.

Gabriel Stulman, who owns eight restaurants in the city, recently told Ms. Otterman, “I don’t want to be dramatic, but this is apocalyptic for the industry.”

The alliance said that 87 percent of the businesses that responded to its survey couldn’t pay all of their rent last month — a number that was up from 80 percent in June. About 60 percent said that their landlords had not waived any portion of their rent.

The survey was based on voluntary responses from the more than 2,500 members that make up the organization’s membership.

Gov. Andrew M. Cuomo announced this month that the city would resume indoor dining at 25 percent capacity beginning next Wednesday. (Indoor service is already available elsewhere in New York State.) The decision has offered some relief to the industry by allowing for more patrons and staff.

The City Council has also voted to let restaurants impose a temporary surcharge — up to 10 percent on each bill — to alleviate the financial strain on the industry. The fee would not replace tipping.

That idea isn’t new: For years, some restaurant advocates in New York have been pushing for surcharges, and cities including San Francisco and Los Angeles adopted such fees before the pandemic.

But restaurants continue to shutter. George Weld, who owns the longstanding Williamsburg restaurant Egg, has said he would cease operations this weekend. Mr. Weld told Eater New York that he was concerned about a dearth of revenue, as well as the safety risk of indoor dining.

The Brooklyn Municipal Building will be renamed for Justice Ruth Bader Ginsburg of the Supreme Court. [CBS New York]

There have been 295 reports this year of broken windows in subway cars, up 64 percent from the same period in 2019. [The City]

Fall officially arrived yesterday in New York City, making us want to send bouquets of newly sharpened pencils to everyone we love. (After all, city schools opened this week, too.)

And we’re not alone: New Yorkers love autumn so much that in 1991 (seven years before Nora Ephron espoused the romantic potential of the red- and yellow-leafed months in “You’ve Got Mail”), The Times ran an entire “Autumn Times” special section devoted to all things fall.

Our photographer Marilynn K. Yee captured the leaf peepers above in Central Park for the issue.

It was Fashion Week, 2010. I was on a downtown R during the evening rush sitting across from a bored-looking red-haired man in his late 20s who was wearing a puffy down jacket.

At Union Square, a good-natured-looking older man with a wool hat stepped in and took the seat next to red-haired guy.

While the doors were still open, a younger man on the platform advised the older man where to get off the train.

“Isn’t it great to have a son that takes care of you?” he said. “You take care of your pop like that?”

“Well, you sound like you’re from there,” the older man said. “Say ‘I am not from Northumberland.’”

They went on to discuss where the younger man was actually from, that he was a tourist, that he had just arrived in New York that day and that, no, he hadn’t gone to the Met yet.

“Well, you certainly fit in here with your bluejeans,” he said. “I’d say those are either Lee or Levi jeans. Am I right?”

“You don’t know what kind they are?” the older man said. “Don’t know? Don’t you know New York is all about fashion?”

News – 87% of N.Y.C. Bars and Restaurants Fell Short on Rent 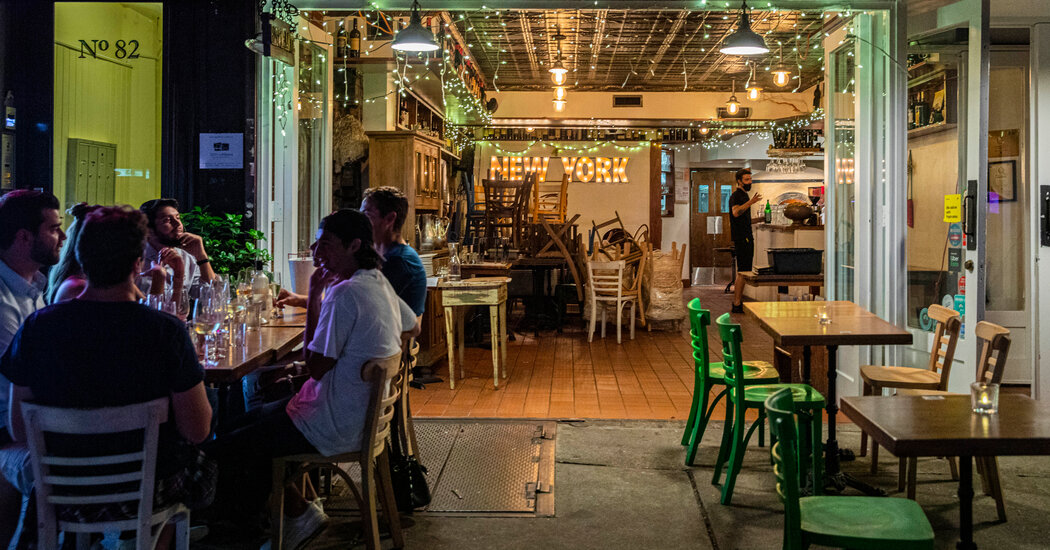